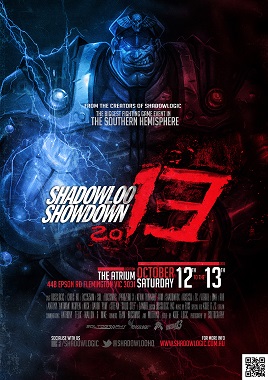 This October The Atrium event room at Flemington Race Center will be transformed into a massive fighting tournament venue for Shadowloo Showdown 2013, the biggest fighting event in the Southern Hemisphere. The event will pit players from Australia and those travelling in from around the world in the top fighting games of this generation for cash and prizes. The tournament isn’t just open to pros, anyone can compete to try and take the crown of their favourite fighting game.

Special guests in the fighting community will also be in attendance. Confirmed so far are team Mad Catz consisting of Tokido and Mago, GamerBee, AVerMedia’s star player from Taiwan and Evolution 2013’s champion from Singapore; DM|Xian.  Xian became the EVO Super Street Fighter IV champion in Las Vegas, beating out over 2000 other competitors.

There will also be various other fighting games for people to play such as Dead or Alive 5, Skullgirls, Guilty Gear and more. Fans of cosplay can also compete in the Fighting Game Themed Cosplay Competition with cash and prizes on the line. A book will be published after the event featuring some of the best shots taken at the contest.

If you want to learn more about Shadowloo Showdown or want to register for any of the events running there, visit the official website. The event will take place on October 12 – October 13.