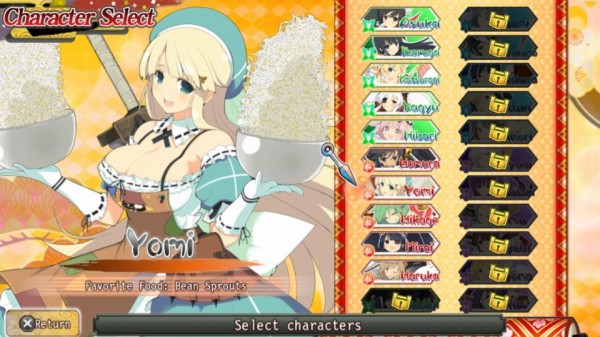 Today XSEED Games revealed that Senran Kagura: Bon Appétit will be released digitally in North America on November 11th and November 12th in Europe. This first release will cost $14.99 and feature the girls from Hanzo and Homura’s Crimson Squad and a couple of weeks later on November 25th the $14.99 “Gessen x Hebijo” pack will be released, adding the girls from both schools into the game and bringing the total playable number of shinobi up to twenty.

Those who previously downloaded DLC for Senran Kagura: Shinovi Versus will be able to import their clothing into Senran Kagura: Bon Appétit to add extra customization options and this also includes Rin and Daidoji, though it is worth noting that you will need to purchase the “Gessen x Hebijo” expansion to play as Rin.

To go along with this announcement a gameplay trailer and some new character art and English screenshots for Senran Kagura: Bon Appétit have been released and you can check it all out below.

Senran Kagura Burst to be released in Europe as well