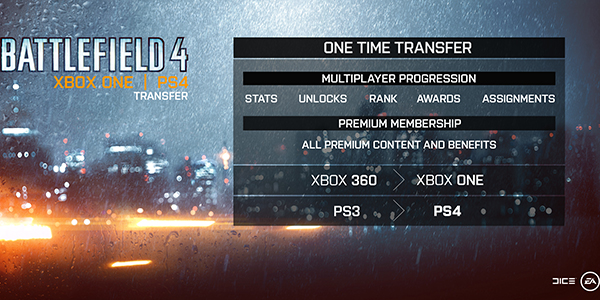 Although many people are drooling at the sight of the new PlayStation 4 and Xbox One, there are gamers out there who will be sticking to their PlayStation 3 and Xbox 360 for a little while longer.

For dedicated Battlefield players, EA is making the transition from current-gen to next-gen easier by allowing for a one time carryover when Battlefield 4 players upgrades their console. Once they move to the new console, all multiplayer progression and premium membership content will carry over to the new console. This will save gamers from having to buy Battlefield Premium twice when switching consoles.

Battlefield 4 To Have Exclusive Xbox One DLC