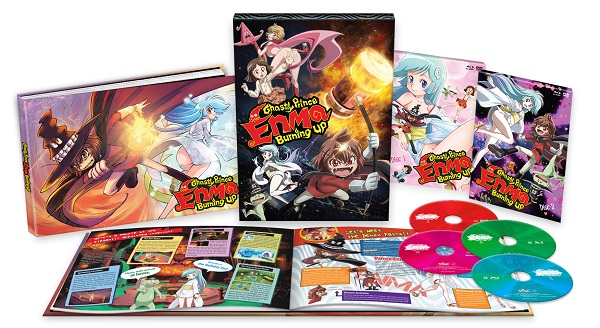 Last July NIS America picked up the license for Dororon Enma-Kun Meeramera, which at the time was still being aired in Japan. After many months of waiting, NIS America has announced that they will now be releasing the newly named Ghastly Prince Enma Burning Up in North America on September 11th.

As per standard with NIS America, Ghastly Prince Enma Burning Up will be given the Premium Edition treatment which includes a hardcover artbook which will show off the show’s crazy characters which includes a hotheaded demon prince, an ice princess who dresses quite lightly, a talking hat, perverted frog demon and a little human girl who just so happened to fall into the middle of their group. The show follows the story of this group as they protect the Earth from a number of demons who want to destroy the world, including plenty of strange creatures.