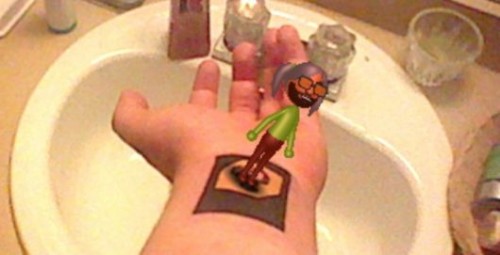 Sometimes, it just isn’t enough to have an AR card.  Even an app on a smartphone is not always handy.  And so, a certain gentleman named Cranberryzero (not a real name) got a tattoo on his arm that replicates a Mii AR card.  Guess what!?  It works too.   A 3DS camera, when pointed at the arm of said person, will display a holographic Mii.  The tattoo works best in dark light, as the light messes up the camera’s ability to make out the tattoo from the guy’s skin.  Nonetheless, this “invention” is pretty cool, but it will be awkward  someday.