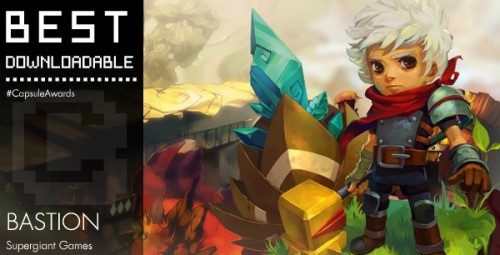 There were so many downloadable titles this year, but none shined as brightly as the little kid that could, Bastion.

Out of nowhere, the Kid awoke on the Xbox Live Arcade. His mind was hazy; he didn’t know where he was. But if there was ever a time when the Kid was in the right place at the right time, that time was now.

With the Kid’s awakening came new life to the sea of downloadable titles. By taking a well-known genre and turning it on its head, the Kid broke new ground and changed the face of downloadable games as we know it.

He knew what he had to do; he had to find the Bastion, that one place that those hit by the calamity, knew as haven.

The Bastion was the place that the downloadable gaming world needed and like a flash of lightning to the heart of the old world, a new one was born in the wake of the Kid’s trail blazed on the Xbox Live Arcade, that lead the Bastion to other worlds (Steam and Chrome) and finally the Capsule Computers Game of the Year Awards for Best Downloadable title – The place where the Kid belonged. 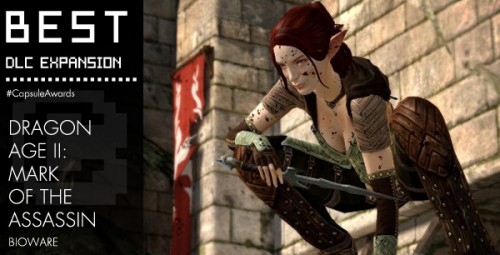 There aren’t a lot of corners of the internet that you can say the name Felicia Day and not have it immediately recognised. At least, not ‘cool’ ones. So it makes sense that the time and story that went into a DLC starring her would be something that would be huge.

The reason that I hold Mark of the Assassin in such high regard is that it didn’t feel like a simple tack-on. It wasn’t just an extra mission or character, it was a good chunk of game play that you couldn’t just whack out as soon as it popped up as playable. You had to have a fair amount of levels, skills and weapons to take this on, lest you be owned.

It really felt like a part of the game, the character interaction with party members in the quest was well done, the story line had plenty of meat to it, including some twists, and they also brought back some familiar faces. The humour of Dragon Age was well present, and the comedy background of Felicia Day certainly helped to bring that out even more.

I think the best part of the DLC was the fact that it was just fun. Unless you tried it too soon and were simply torn to shreds. There were some interesting battles, some great gear to pick up, some really interesting back-story, and (as per usual) some awesome creatures.

The reason that Mark of the Assassin stood out from other DLCs was not just because of Felicia Day, although she certainly brought extra amounts of attention to it that would have otherwise not been present. It was because it didn’t just feel like a DLC that they sent out to earn some money and try get some people back into playing it, it was because it felt like a part of the game that you had just stumbled upon. And the fact that people were cut that you couldn’t continue to play with Tallis speaks volumes.