Honey, I Joined a Cult

I have to admit: when I was first offered an opportunity to do a preview for Honey, I Joined a Cult, I was excited. I mean, the idea is fantastic: having your own cult and being able to abuse people’s stup… I mean, good faith! All while you get you get rich and make your cult bigger and bigger. You may be able to summon “the squid lord” and have it wreak havoc upon the infidels. You know, faith in the unknown is something that always intrigued me since I was a kid. I thought to myself sometimes what would it be like to have some kind of deity descend upon the Earth and maybe even do battle with the “evil” army. It seems ridiculous, and it is, but so is believing in something just because the collective do the same. Honey, I Joined a Cult, puts its emphasis on the “collective belief” part. It’s a building and management simulation type of game. You build and manage, that’s it. Seriously, that’s really it. You think you’d get to sacrifice your cultists in some creative and inhumane way or summon the above mentioned “squid lord”? Think again. The game tries to make fun of its own background, that is, the 70’s and the search for “spirituality” and the “meaning of life” of that era. That means drugs, sex and rock and roll, right…right? Wrong again. This is a game with a low age rating, meaning that not even curse words are allowed. So, besides that, what is really left? Building and management with some unfunny jokes thrown in.

You can research and build strange therapy rooms such as the maggot bath; -ew…- a spirit channeling room, where the cultists will hold a seance; and even a prayer room where the leader will hold a sermon in the name of… whatever kind of thing you decided to base your cult on, but in the end, it’s just a means to make your “base” bigger and advance the game. There’s no special event introducing a new kind of therapy or even a specialized member that can administer it; everyone in your cult can do anything. It’s only later that the cultists stats will make a real difference, allowing them to partake in missions to make your cult more well known and, in turn, attract better followers.

The player is able to select between a few pre-made cult choices or mix them and make something amazingly ridiculous. This game makes no mention of any religion or belief held in the real world whatsoever, aside from the cult of “Flump” which makes reference to a certain politician from a remote country. It has a pig as a flag. That’s very cool; a political statement in a modern, western videogame. I have never seen that one before.

You can skip the intro which is basically: the cult went wrong. Everyone except you was detained by the police. The only option is, of course, to create a new cult. Once you sort what kind of cult you’ll want -I, personally, went for the dinosaur cult which worships the mighty “Grimlock”-, you’ll have the game guide you through a seemingly never ending number of tutorials. There’s a lot of parameters and stats that both your cult HQ and its members have. The heat gauge, for example, will tell you how much negative attention your cult has; if it gets too high, you’ll have protesters or even the police at your door. Still, the game is very lenient to the player; I initially let a lot of people die or leave the cult in dissatisfaction, making the heat gauge go up significantly, but still, no protesters or police in sight. I’d prefer a “game over” in this circumstance, with the game subsequently giving tips to better manage your cult. It would make things flow better, in my opinion, without leaving you wondering what went wrong in some cases.

To advance the game, the player needs to research and create rooms to attend to the cultists basic needs lest they go even crazier and start to break things and eventually leave the cult or die. Like any self-respecting cult, you’ll also need ways to rob… ahem, “collect donations” from worshippers so the cult can prosper, and of course, increase your influence over them; it’s with the use of these two main assets, that you’re able to research and build new rooms. It’s only through research, which is presented as a skill tree, that you’re able to build new kinds of therapy rooms, increase the number of cultists your base can hold, and even new types of food they can eat. When everything goes according to the plan, cultists will level up and gain points to be distributed between their many stats which will influence their ability to perform a certain job, such as recruiting new followers and operating any of the therapy rooms better so it yields better donations and leader influence. The graphics use 2D art presented in a top down view, like what you’d see in an RPG Maker game. They’re extremely simple and drab looking. There’s a type of “70’s” background music almost always playing on repeat and some simple sound effects. The game just entered early access on Steam, but it seems the foundation is already set. That said, there’s a lot of room for improvements, and it might end up as a little fun management game when it’s finished.

Not Recommended – “Honey, I joined a Cult is still very rough around the edges. The mechanics are a bit confusing, and the visuals really hurt the eyes. It just launched in early access, so it still has time to improve.“

Claudio Meira
I have been playing video games for 36 years. I should be put in a museum by now, but here I am, writing about them.

Team17 to Publish Honey, I Joined a Cult 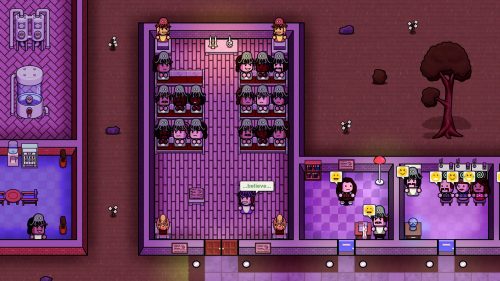