Volcanoids offers a new twist on the long running and highly popular open world survival sandbox genre. Players are on a volcanic island that explodes every 25 minutes, completely destroying everything above ground. To survive, players live and work out of a mobile drill ship that will allow them to travel around the island and hide during the explosions.

The game has been on Steam Early Access for a little over a year now. We recently checked out the game as the developers just released a major update overhauling the combat.

While Volcanoids is advertised as a survival title, the game is more focused on the crafting and exploration elements. Traditional survival mechanics like hunger and thirst have been dropped in favour of the 25-minute explosion timer. The consequence of ignoring the timer is punishing. Any items, players, and mobile drill ships left above ground are obliterated. Time and risk management are big parts of Volcanoids’ gameplay, especially when playing alone. Mid to high tier crafting must be done while the drill ship is deployed above ground and vulnerable to attack, but players are under time pressure to explore to gather resources before the explosion. It’s a tense balance, but an entertaining one.

The crafting system is solid. The bulk of the crafting must be done on the drill ship using automated machines as workbenches can only output basic items. Crafting is tied with base management, as the drill ship has limited power and slots for modules needed for production, research, defense, refineries, and storage. The tech tree doesn’t offer any noteworthy innovation, but it is solid none the less. The pacing is excellent as it never increases exponentially just to extend the length of the game. Currently, it offers three tiers, with each tier unlocking new items. I really like how the tech tree rarely makes old items obsolete, but either carves out a niche for the item or offers upgrades like better ammunition.

The level design is decent so far. Volcanoids offers a mix of a 2D underworld, a 3D overworld, and several 3D underground caves. The 2D underworld connects all the 3D maps together and provides some resource gathering opportunities while players wait out the volcano explosion. The 3D overworld is on the rougher side right now. There are a lot of reused assets which make areas blend together after several hours. The caves break up the gameplay, but they too tend to look the same after a while. The one saving grace is how the level’s resources are reset with each volcano explosion. It is a simple solution to the age old problem of exhausted resources that plagues many open world survival sandbox games.

Volcanoids’ combat is in a decent place right now. Bots are found in towns and endlessly spawn from hostile drill ships. Bots spawning from ships tend to be quite aggressive, patrolling around and attacking the player’s ship once enough of them are gathered. They aren’t smart, but they are incredibly relentless.

The gunplay feels good. The developers have opted to use a smaller number of guns, but a large variety of ammunition to keep older weapons relevant and give weapons a little extra flexibility. The projectile based weapon system can make firefights chaotic, but the mobility heavy combat feels good. The weapon balance is still a work in progress though. The submachine guns feel a touch underpowered still considering their material cost. The grenades on the other hand are wildly overpowered considering their cheap material cost and how early players get access to them. I found carrying thirty or more grenades and relying on them almost exclusively when attacking an enemy drill ship was one of the most reliable tactics.

Volcanoids is generally not a difficult game to learn. The initial tutorial is very thorough, except for a few notable exceptions. The very first explosion timer is a bit short. There is barely enough time to get everything done if players understand the information perfectly. Tacking on an extra three to five minutes and providing clearer indicators on how to get the drill ship underground would be helpful. Second, the tutorial does not make it clear enough that sending the drill ship underground while players explore is the default tactic. This important bit of information should not be buried in the in-game manual. The in-game manual on the other hand is incredibly extensive. My only complaint is I would have preferred to see slightly more detailed information about turret ranges, as the game currently offers very vague descriptors instead of actual numbers.

The visual presentation is excellent so far. The game offers a brighter take on Steampunk. Hopefully more bot designs will be introduced in the future, as they generally look alike except for colouration. Without a doubt, the best visual effect in the game right now is the transition between the ash covered wasteland just after an explosion to the lush and vibrant landscape. The change is so subtle that it’s easily ignored, but it is always a pleasure to stop and admire the landscape and realize how much it had changed.

Volcanoids is wading into the crowded open world survival sandbox space with a unique take on the genre. Halfway into their planned two year early access, Volcanoids is in a good spot. It is already in an enjoyable, albeit short, state. Besides more content, most of the areas in need of attention are balancing and visual variety. The game is already worth considering for those willing to take a risk on an Early Access title. For those who prefer to wait, Volcanoids likely has a bright future ahead of it.

Check out gameplay for Volcanoids below: 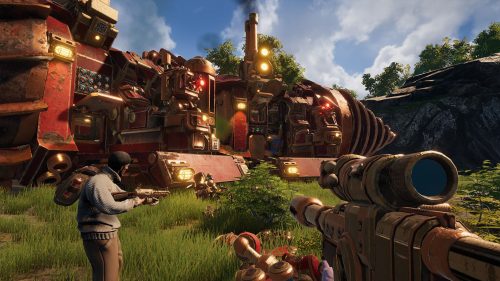 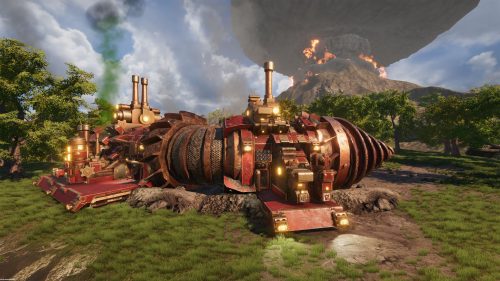