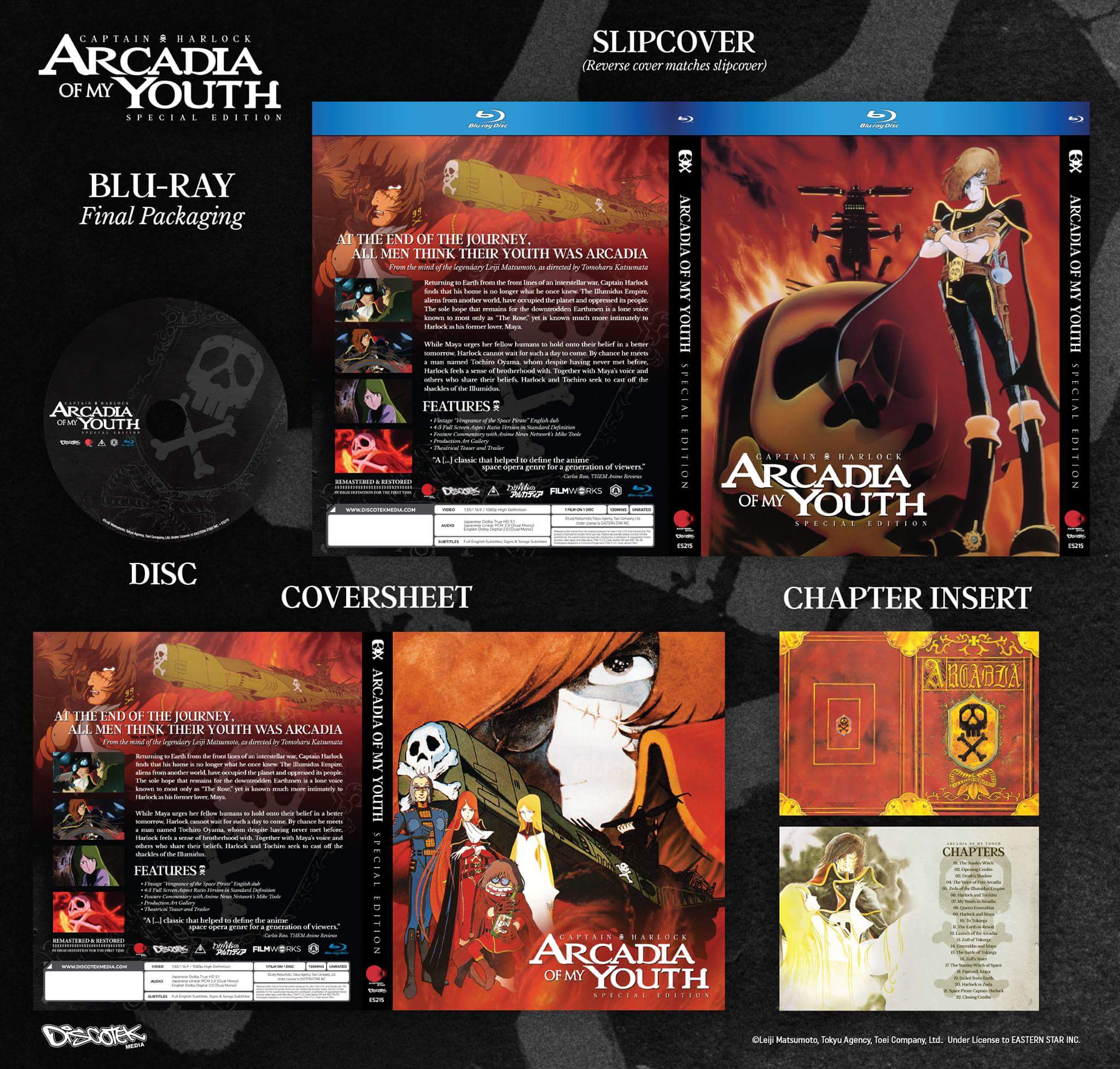 Click on this image to view it at its original resolution.

At Katsucon 2017, Discotek Media announced that the Captain Harlock: Endless Orbit SSX TV series will be released on DVD in North America for the first time later this year. They later revealed the packaging artwork for their Blu-ray release of Captain Harlock: Arcadia of My Youth, which is featured directly above this paragraph. Arcadia of My Youth will be released on DVD and Blu-ray on May 30, 2017.

Just a few hours ago, Discotek Media announced four more anime license acquisitions on their official Facebook page. The Crusher Joe movie, Fighting Foodons, Freedom and Ultra Maniac are all coming to home video in North America. All of these titles will be released on the 25th of April, 2017.

The official synopsis of the Crusher Joe movie is as follows:

Crusher teams are hired for all kinds of reasons, and this latest job seemed easy: steal a cryogenically frozen, terminally ill woman from a gang of criminals and transport her within thirty hours to a place where her illness could be treated. Only things go sideways when an unknown effect pulls Joe’s ship out of warp, leaving him and his team adrift in space with a United Space Force battleship bearing down on them with accusations of piracy! What’s more, their patient on ice, their payment, and their client are all missing, which leaves the team with nothing to prove their innocence. Someone set them up, and they’re not about to let that go! A tip leads the team to Lagol, a planet overrun with outlaws and bandits. It’s a dangerous place, and Joe, Alfin, Ricky, and Talos have only just scratched the surface of a conspiracy that could rip space and time apart.

Fighting Foodons is described as follows:

Ruling the world through cooking might sound like baloney, but when food can come alive as combative cuisine, it’s no yolk! The conniving King Gorgeous Gorge and his greedy Gluttons are smothering innocent people with their evil Fighting Foodons, and it’s up to the young apprentice chef Chase and other rebel chefs like him to stand up to the evil epicureans. The only problem is Chase’s greatest culinary accomplishment and his strongest Fighting Foodon is Burnt Meatballs! Though cute, they fight like they taste, and when Chase’s dad Jack, a master chef, is kidnapped by the Gluttons, Chase will need a lot more than charred beef to pull his dad out of the fire!

The official synopsis of Freedom is as follows:

In the 23rd century, mankind has fled Earth and emigrated to the moon. The last outpost of civilization is the Lunar Republic of Eden, where the omnipresent Citizens Administration Council grants residents everything they need. But what do you do when you discover everything you believe is a lie? A single photograph with an inscribed message found inside a rocket launched from Earth leads a group of young men to question the council ruling the seemingly utopian city. But what length will they go to discover the true meaning of Freedom?

Ultra Maniac is described as follows:

Ayu Tateishi is in her second year of junior high school and is known as the cool popular tennis club girl that all the other girls idolize. To tell the truth, Ayu only acts cool in order to impress Tetsushi Kaji of the school baseball club. Then, one day, Ayu meets Nina Sakura, a transfer student who had found Ayu’s missing purse. Nina’s strange personality had left Ayu a little perplexed. Furthermore, Ayu finds out that Nina is a witch that came from the kingdom of magic to study abroad. This is a story of one girl’s hope of love and another girl’s study of magic and their friendship to overcome the challenges set before them. Get ready for the ultra-cool, ultra-funny, ultra-romantic Ultra Maniac!