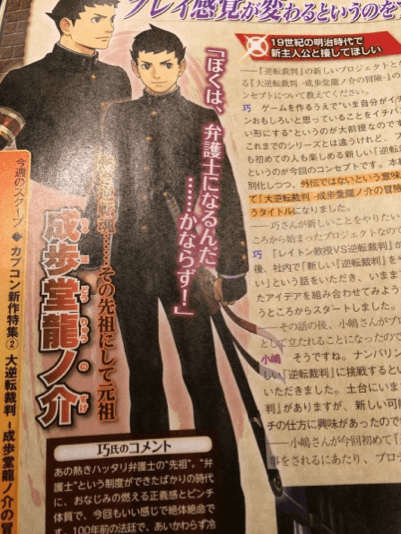 Coming to you – courtesy of “Kadokawa’s Weekly Famitsu” magazine and “Capcom” themselves – is a brilliant nugget of pure gold news regarding the next in the line of “Ace Attorney” titles, this time though…they’re getting a little weird with it IF you can believe that!

Set in Japan during the 19th-century – history buffs will know this as the “Meiji-era”; a time in Japanese history where great changes were made and development was booming – this Nintendo 3DS title will follow a hansom, young protagonist that goes by the name “Ryunosuke Naruhodo”.

Looking at the man, you’ll notice he resembles a certain other lawyer we all know and love. Don’t even begin to speculate his connection to Mr. Wright…because it’s already been confirmed; Ryunosuke IS a distant relative to the blue-suited, odd-haired, lovable idiot.

Shu Takumi – the original “Ace Attorney” franchise developer for the series – is, once again, taking part in the games development as director. No release dates have been revealed yet but that’s normal seeing as “Dai Gyakuten Saiban -Naruhodō Ryūnosuke no Bōken- (Great Turnabout Trial: The Adventures of Ryūnosuke Naruhodō)” was just announced but be sure to stick to the site for any and all news that breaks.