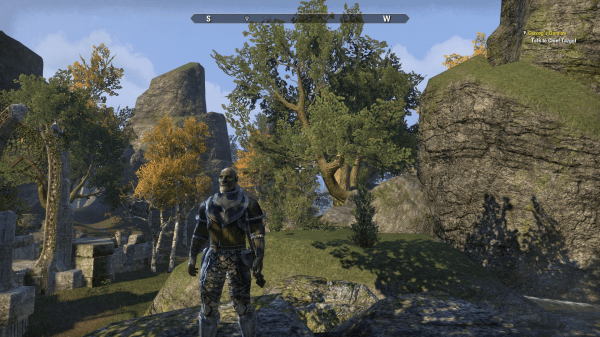 Ah, Tamriel. Lands rich with lush, vibrant flora, diverse, deadly fauna, and a wide range of sentient races, each with their own worldviews and problems. From heavily populated metropolises to dark, ancient dungeons and beyond, through tales of heroism and intrigue, the world of The Elder Scrolls has long captured the imagination of fans.

In recent years, those fans, many of whom have poured hundreds of hours over multiple games into Bethesda’s fantasy universe, have begun to question whether a multiplayer mod could be released for the enormous single-player games. Bethesda’s answer was The Elder Scrolls Online, an MMORPG set in Tamriel. I recently had an opportunity to take part in the game’s Beta. Here are my impressions. 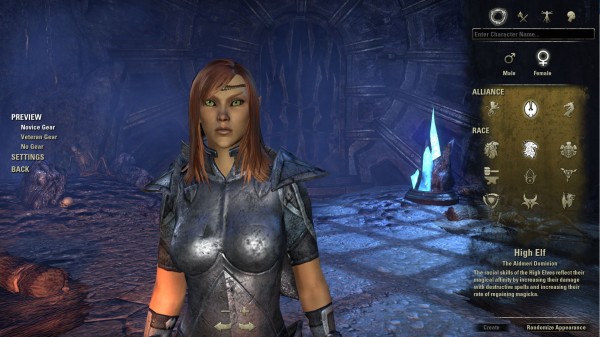 Character creation in the Beta combines elements of both traditional Elder Scrolls and modernized MMO character creation, leaning more to the latter. You choose one of the traditional 9 races, each of which belong to one of three factions. After that, you pick one of four classes: the tank-like Dragonknight, the arcane Sorcerer, the sneaky, cunning Nightblade, and the noble Templar. Having only four classes feels somewhat underwhelming compared to its contemporaries, but players will find that classes feel more open than other similar titles. Be sure to check out our preview footage below this article to see it in action.

The story will take you from the prison of the dead to Stros M’Kai, where you’ll meet a group of companions. From there, you’ll travel the world, dealing with your own journey as well as the tasks you take on from people of Tamriel. Thus far, the storytelling is well done and the voice acting top-notch, helping to bring a sense of vitality to the world. 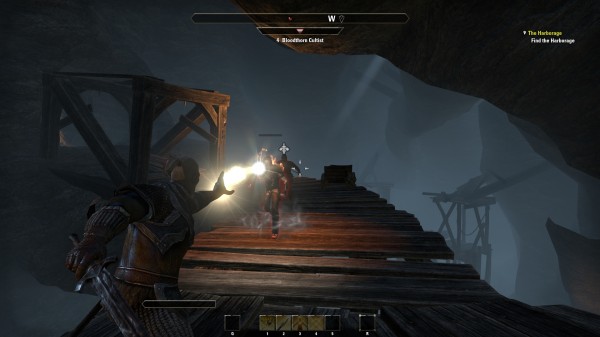 Combat is, undoubtedly, one of the largest aspects of The Elder Scrolls Online. Like its contemporaries, you will learn class-based skills as you level up. These are accessed via the hotbar. Unlike other MMOs, though, fans of the franchise should feel at home swinging their maces, staves, and blades in real-time. Lost with this entry are the directional swings from the single-player entries, but you can left-click to swing, hold to perform a charged attack, right-click to block, and double-tap a direction to dodge. It helps give the MMO a feeling of dynamism in combat.

As you complete quests, take out enemies, and level up, you’ll earn two forms of reward. You’ll get points to spend upgrading your character’s health, stamina, or magic, and you’ll get skill points. Within the skill menu, you’ll work up through three trees, each with a different focus. For example, the Templar has a combat-focused tree, a spellcasting tree, and a healing tree. When you unlock a skill, you level up that individual skill as you play, eventually earning the right to further refine it’s effects. Each tree also has an “ultimate” skill you can use to great effect, albeit much less frequently than normal moves. If you would rather place your skill points elsewhere, though, you can upgrade your armor proficiencies, racial abilities, combat style (two-handed weapons, dual wielding, weapon-and-shield, etc.) and more. It’s fun and rewarding to see your skill trees progress, but it still feels like skill progression lacks a true sense of satisfaction. 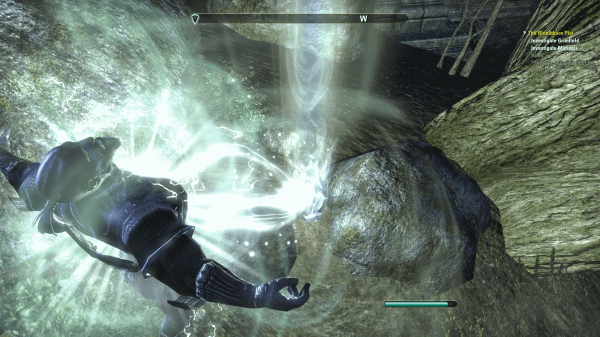 Questing in ESO feels like standard fare for RPGs. You’ll talk to someone, get a task, then go carry out that task. To its benefit, though, ESO rarely has you doing the boilerplate “kill X of these” quests to earn your reward. They tend to be well-written, with fun or interesting stories accompanying them. Have you ever seen an Orc beg you for help because he’s afraid to slay a beast but his mother wants him to become a notable warrior? They’re well entertaining beyond the quest rewards, and that’s largely due to Bethesda’s attention to narrative. They also make navigating to quest objectives a little easier, with the compass telling you if it’s on a different floor than you. Early impressions for those interested in story content bode well for the final release when it hits store shelves.

Fans of the franchise will feel right at home with the exploration mechanics in ESO. Like the single-player entries before it, the world of Tamriel is filled with wondrous sights to stumble upon, many of which may contain hidden treasure or an interesting bit of sidestory. As you wander around the map, nearby sites will show up on your compass. Finding them will mark them on the map so they’re easier to track down later should the need arise. Players will also notice that many of the world’s containers (boxes, crates, backpacks, etc.) are searchable, allowing you to enter an area and go buck-wild on Dwemer jars, just like you could in the good old days. New to ESO, however, are items known as “skyshards.” These are hidden throughout the world, and ever 3 you find will grant you a permanent skillpoint, adding even more incentive to scour Tamriel. 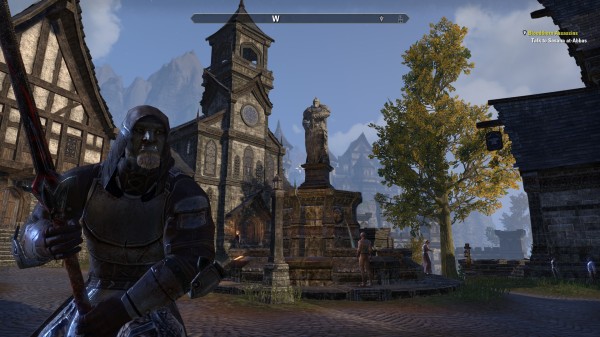 The Elder Scrolls Online is a beautiful game, hands-down. When you travel around the world and look at everything, it’s easy to see fantastic attention to visual detail is being placed on the game. Everything from house spiders to characters and gear to the cityscapes are well laid out and visually pleasing. Dungeons feel dark and dank and jungles feel vibrant and alive. It will be interesting to see what more they can churn out before retail.

The sound design in the early build I played already has more polish than most of the other games on the market. With involvement from composer Jeremy Soule, the soundtrack is set up to bring a wonderful sense of atmosphere and emotion. The voice acting, mentioned earlier, feels sincere and well-delivered, delivering a sense of weight to even the most piddling sidequest. 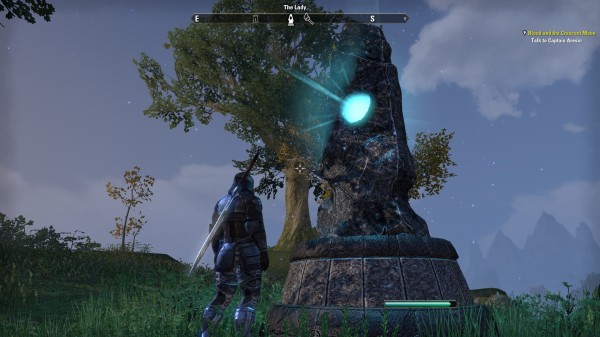 As good as the preview build looks, there are a few things that may concern long-time fans of the series. ESO is an Elder Scrolls game built on an MMO framework – not the reverse fans have wanted for so long. Character classes are built on archetypes, which is more rigid than Elder Scrolls games tend to be. Inventory is based on a limited number of spaces instead of weight. You also can’t manage personal inventory while in a loot screen. Some things can easily be fixed before or shortly after launch.

Overall, The Elder Scrolls Online has had a solid first showing. Fans of the franchise looking to play in Tamriel with friends should definitely keep their eyes peeled for this game. If it stays the course, it will deliver excellent narrative, compelling voice work, and a beautiful, intriguing world to explore. Hard-line fans of the single-player games may not be happy with all of the changes, but it’s ultimately poised to deliver what fans have been asking for – an Elder Scrolls experience with an online framework.

For screenshots taken from our time with the early build, be sure to check out our gallery below. You can also check out video footage of the game below this article. Be sure to come back to CapsuleComputers for all your Elder Scrolls Online news! 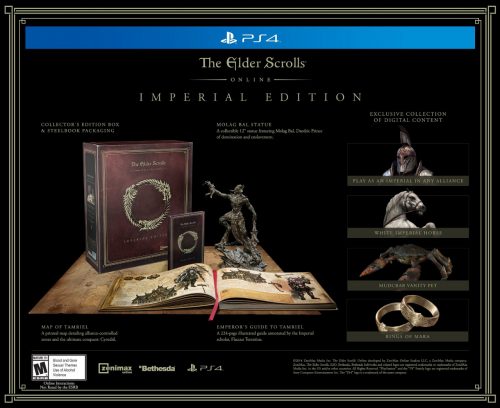