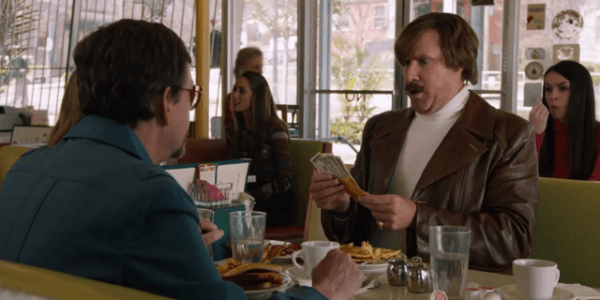 “No offense, but you are stupid.” Only Ron Burgundy (Will Ferrell) can get away with saying this to a man’s face… well, perhaps GNN news producer Freddy Schap (Dylan Baker) is the only guy who would take it!

In the new Anchorman 2: The Legend Continues clip released by Paramount Pictures entitled “I’ll Take The Job” – embedded at the bottom of this article – the great anchor is given a proposal that he initially laughs off, until he sees the cashola! Cha-ching! Ron’s obviously all about making that money. And so what seemed like a ridiculous idea – a 24-hour news station – has now become part of Ron’s reality. Check it out below, along with the last clip which shows the moment Ron meets the “best in the biz” Jack Lime (James Marsden).