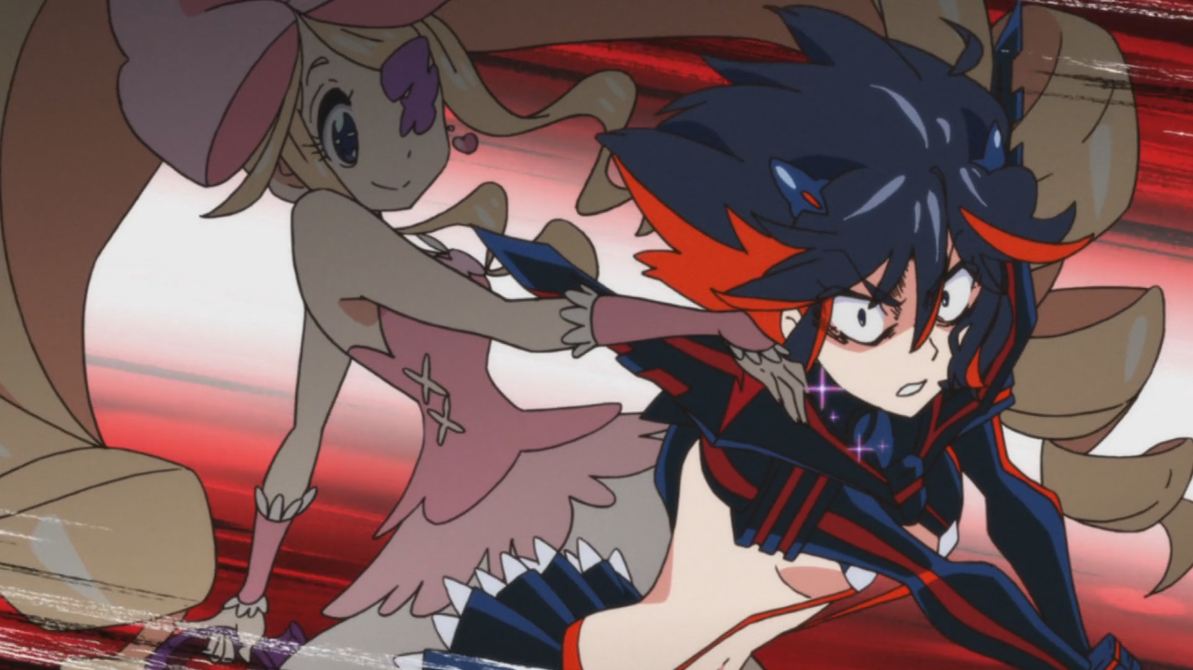 She’ll crawl under your skin and wreak havoc from within

Holy to the absolute crap. This episode definitely took one hell of a twisted turn. Alright, so we all knew that Ryuko isn’t the calmest student at Hannouji…but damn. We all knew from last week that she was angry at Nui…but this? This turned it up to eleven, then multiplied it by two.

In short: anger can be dangerous. Not just to those on the receiving end, but those who dole it out. Even if rage is a natural response, it is by no means the correct one. Those who allow themselves to be consumed by their most base emotion may just lose sight of what first drew that feeling out…and when they should stop. Ryuko learned that the hard way. As her fight with Nui took her far beyond her tolerance for hatred, she began to lose herself. Her blood boiled beyond any definition of safe and even Senketsu was unable to keep her in check. Then it happened…

Full. Blown. Monster. Beyond bestial fangs. Horrid, soulless eyes. An asymmetrical body, contorted beyond all possible human thresholds. Her neck was no longer attached to her body, rather it latched on to Sanketsu malformed eye. Not to mention the constant and catastrophic blood loss or the torturous, rasping screams. There really wasn’t much of Ryuko left in there. All that was left was hatred. Cruel, explosive hatred. 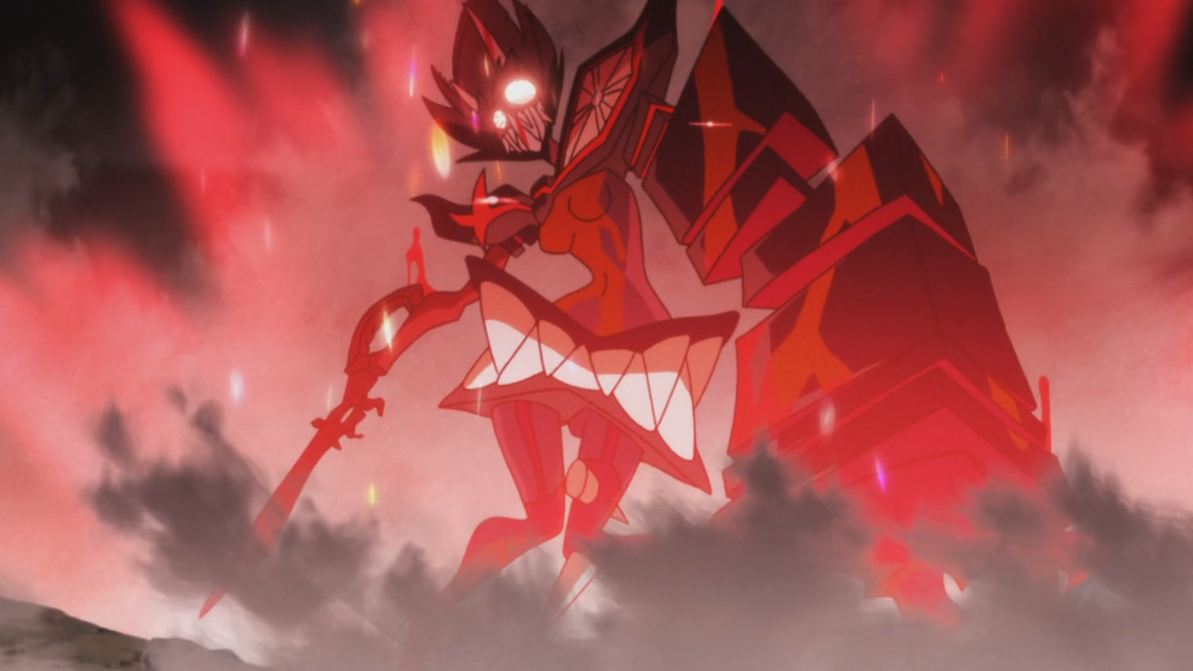 A writhing deformation of inconceivable malice

As Ryuko lashed out at all who dared tread near her, Mikisugi and Tsumugu called their plan into action from afar. The bullet. Tsumugu explains that the round possesses a “starching effect” and that whilst it will defeat clothing, the survival of the one wearing said clothes is not guaranteed. As Tsumugu enters the battlefield to try and halt Ryuko, he learns just how terrifying her power is. That being said, the staunch opposer of Life Fibres expressed a hint of sadness when he discovered that Ryuko had lost herself to the Kamui, expecting her will to be stronger than that. Even Mikisugi, for all his bravado, hesitated a number of times when he was about to pull the trigger. Not only that, but the two Nudists also bore witness to the incredible might of Nui Harime and…Satsuki. That’s right, even the illustrious President could not leave Ryuko unchecked. Descending from high she sought to destroy the one who would destroy her school, worse than that, the one who would allow their clothing to take control. It would seem that her indomitable, and slightly off kilter, pride momentarily aligned her with the greater good…it just so happened that it was against Ryuko. Though these incomparable warrior clashed in an unbelievably destructive battle, it was not Satsuki who brought an end to Ryuko’s madness. Rather, it was Mako who found the remaining thread of Ryuko’s humanity and pulled her from her self imposed desolation just in the nick of time. Even Satsuki notes this, telling Mako that Ryuko lived thanks to her efforts. Kind of a nice thing for the tyrant to say.

As is also common with Kill la Kill, we learned a great dell of backstory in yet another flashback…
As if we didn’t know already, Nui Harime is also proven to be an utter psychopath. Worse, an intelligent, manipulative psychopath. That didn’t save her however, from the apparently kickass Dr Matoi. Don’t let his looks fool you, which they will, that guy can fight. Flips, kicks, slashes. He even has a cool Life Fibre lab coat, though it apparently only has the power to retain shape. Still, handy. He was also able to wield his greatest invention: The Rending Scissors. Designed to cut and destroy those pesky little Life Fibres. However, his scientific acumen and skill with a bizarre blade were not enough to save him. Though he did put up one hell of a fight, right to the bitter end. He even managed to rob Nui of her left eye…served her right. However, he was able to hide Senkstsu’s existence from her, a fact which Satsuki believes fuelled her psychological attack on Ryuko. Though she of course denies this. 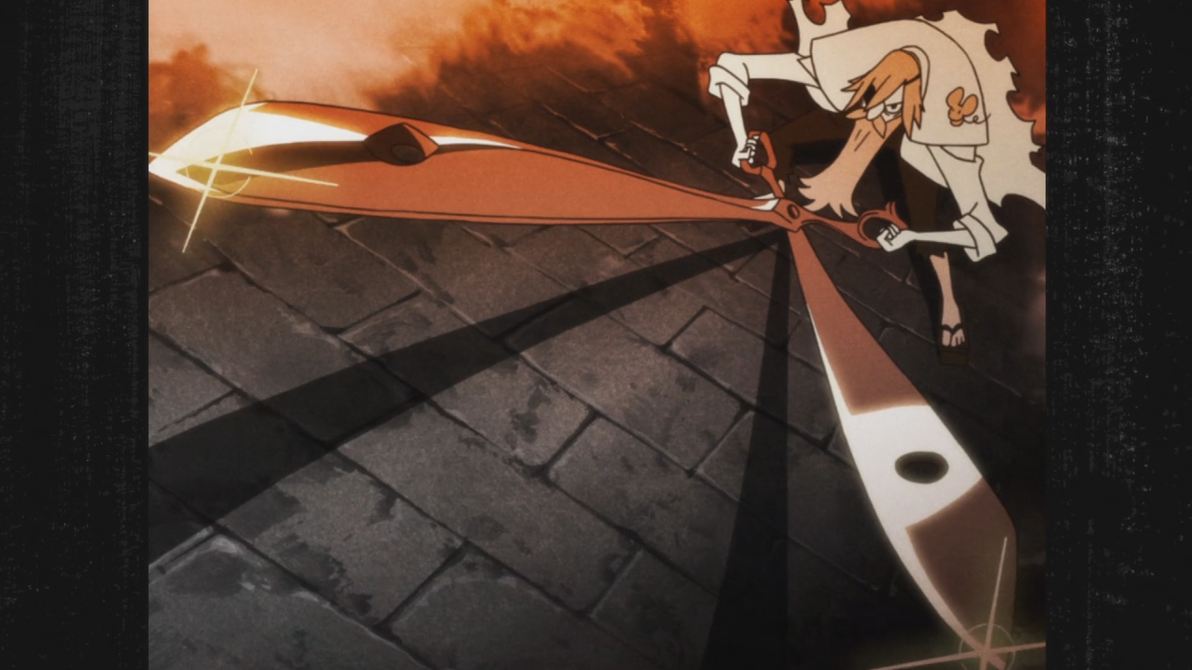 Before circumstance would tear it asunder

So this week we learned that Mikisugi’s fears are not entirely unfounded, as we were so clearly shown. Even Ryuko’s status as anime protagonist does not protect her from the caustic effects of pure seething hatred. That being said, rather than it being Senketsu who dominated Ryuko as Nudist Beach so frighteningly implied, it was in fact Ryuko who overwhelmed her Kamui and went on a roaring rampage of revenge. Were it not for the timely arrival of everyone’s favourite little oddball, our hero may very well have continued her jaunt through insanity and been dissolved by her own malice.

In a post credits scene we see that Satsuki is overseeing some repairs being made to Hannouji. Though Ryuko, now back to her regular level of anger and combativeness, leaps her and attempts to instigate another fight, Satsuki blocks with her usual grace. She also thanks Ryuko. Due to the data acquired during the Naturals Election, she has perfected her Goku Uniforms, and thus is ready to begin her domination of he West Academies. In one weeks time, Hannouji is going on a battlefield trip…and it won’t be fun. You can count on that. 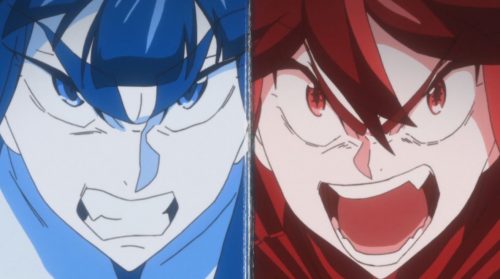