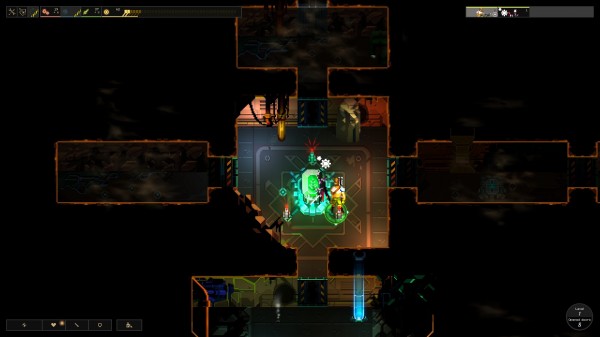 Rogue-like games have been all the rage in the past twelve months and tower defense titles for the last 24. Amplitude Studios explores both genres with their new game Dungeon of the Endless. The game will start players off with two heroes and a power crystal. As the heroes begin opening doors in the dungeon, they will be able to build machines that will help defend against the oncoming hordes while generating much needed resources for expansion. For every door that is opened, players will be rewarded with industry and food points. Industry is needed to build machines while food is used to heal heroes and pay for level ups. Though there is a display for science points, they have yet to be implemented in the game. 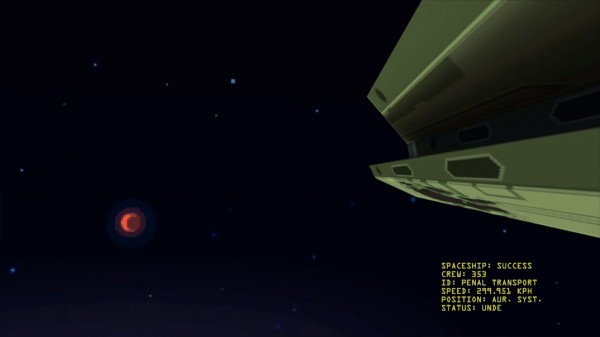 Beyond the doors lay enemies to slay, loot to collect, blueprints to learn, heroes to recruit, merchants to buy from, and most importantly the elevator to the next level. Waves of enemies will spawn in random rooms every few minutes. Unlike the enemies found behind doors, the waves will march towards the crystal in hopes of destroying it. Killing enemies rewards the player with dust that is needed to power the crystal. Every 10 dust allows the player to power the machines in one room. As enemies attack the crystal, players are penalized dust. Once the elevator to the next level is found, the trickiest phase of Dungeon of the Endless begins.  One hero will need to pick up the crystal and carry it to the elevator as endless waves of enemies spawn and attack the heroes. The heavy crystal will weigh down the hero, slowing them down to a crawl. This phase is a tense race to outrun the waves of hostile creatures while the unencumbered heroes provides some protection to the poor hero chosen to play the pack mule.

The gameplay an excellent balance of dungeon crawling and tower defense. The two elements don’t necessarily go together, but Amplitude Studios have made them mesh well. The game requires players to be prepared to come rushing to the defense of their crystal during a wave of attackers or risk leaving one of their heroes safely in the base to buy time against attackers at the cost of having one less fighter while exploring. 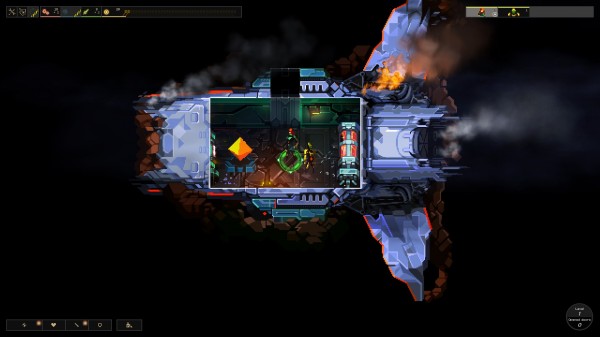 It is important to note that in its current state, Dungeon of the Endless is blisteringly hard. The game is meant to be played co-operatively, but the co-op has not been implemented in the game yet. Getting to the second level of the dungeon is already a good challenge and the second level’s difficulty goes up exponentially. Enemy waves of attackers can ambush just as a door is opened and a horde of angry monsters are stumbled upon, making the game even more challenging. Each time the player loses all their heroes or the crystal is destroyed, the game restarts with two new random heroes and a new dungeon layout.

The controls are decent for the most part. The controls are very similar to the average RTS, so Starcraft players will be right at home. The hotkey are well thought out, though the game could use more hotkeys, especially for building machines. The UI layout is Spartan and utilitarian. One of my biggest irritants at the moment is pressing escape will pause the game instead of closing any menus currently opened. To close those menus, I had to manually press the X icon. 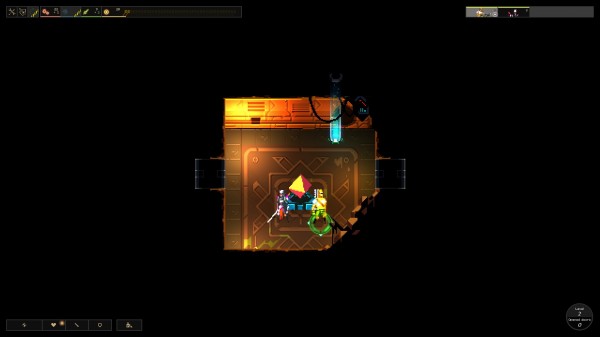 Dungeon of the Endless is presented in a retro styled graphics reminiscent of the 8 and 16-bit era of video gaming. The colour scheme is on the soft side and rather modern compared to the harsh colours of retro titles. Right now players are stuck playing the game in full screen mode and have a choice between pixel perfect resolution as intended by the developers or one that fits the game to the size of the screen.

The music and sound effects in Dungeon of the Endless are very pleasant. There are a few songs implemented in the game right now. The music and the sound effects, like the graphics, are a modern take on retro chip tunes. Amplitude Studios has a great soundtrack on their hands if they can maintain the current quality of music for the remaining soundtrack. 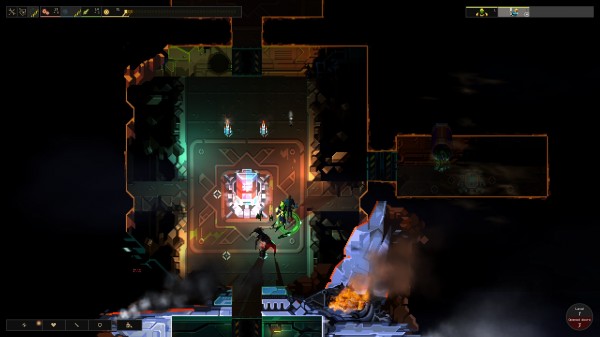 Dungeon of the Endless is shaping up to be a great game. There are some excellent ideas forming here. The dungeon crawling and tower defense elements are worked together in a pleasant manner. I believe Amplitude Studio’s challenge is to implement the Science function in a meaningful manner and finding the correct difficulty balance while they add more content to the game.