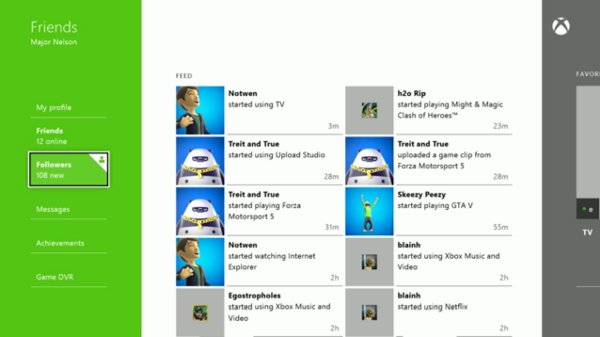 While it was revealed that the Xbox One would be increasing the friends list 1o fold, but other than that change no more information had yet to be released. Until today at least, as Larry Hryb aka Major Nelson has made a video showing off his own Xbox One friends list and going through all the changes and new additions.

Officially called the Friends App, the additional features include not only the expanded capacity, but the ability to follow as well. So, players can see what all the top gamers are doing without the necessity of accepting a friend request, but have no fear anti-socialites the follow feature can be blocked as well. On the reverse, players can also choose favorite friends to make it easier to check in on their core Xbox gaming group, plus a feed of activity makes it easy to track what friends are doing at the moment, from starting up specific games, to uploading clips.

These are just some of the features though as there is quite a few, so those wanting to see all of the additions in action can check out the new video embedded below. Xbox One is set to release November 22nd, 2013.