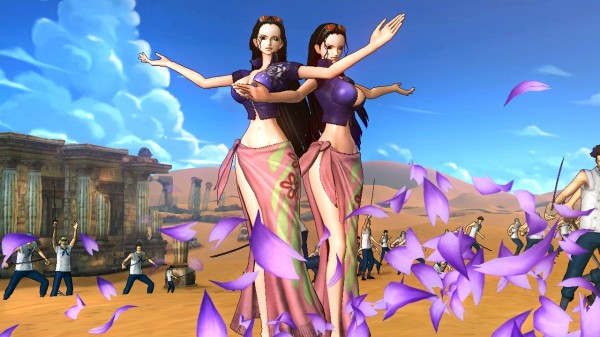 There’s nothing better than a giant, sexy Nico Robin.

One Piece Pirate Warriors 2 was only just released down here in Australia and it’s set for a release in North America tomorrow (September 3rd 2013), because of the releases it seems like Namco Bandai Europe wanted to give us all a little something extra just in case we didn’t manage to pick up the game on the day of it’s release. The team at Namco bandai Europe, over the weekend, released a Launch Trailer for the game which shows off some incredible stuff like action-packed cinematics, crazy gameplay and a story that really speaks to all One Piece and adventure fans. The game will take place within an original story where characters from all over the One Piece universe will come together to fight for the greater good in a battle like no other. Check out the video below:

Something else that was previewed in the video was the “Robin’s Edition” of the game which includes two different story scenarios, one being called “Pacifista and Warpol” and the other being called “Zoro and Sanji”. “Robin’s Edition” will also come with prequel costumes for Sanji, Zoro and Robin herself, as well as two extra costumes for Robin based on Dynasty Warriors’ Xingcai and Samurai Warriors’ Kai. Not only was there a trailer release but Namco Bandai America also released a short video with commentary which takes viewers through the beginning of the game and is set out like a gameplay introduction. It is narrated by Community Manager J. Kartje. Check out the video below:

The PlayStation 3 title has already been released in Australia so if you’re local I suggest you go and pick this one up now, the North American release is scheduled for tomorrow (September 3rd 2013). We finally made it to the release of One Piece Pirate Warriors 2, it seems like it’s been ages, the anticipation and hype has been great and I’m very excited for this release.