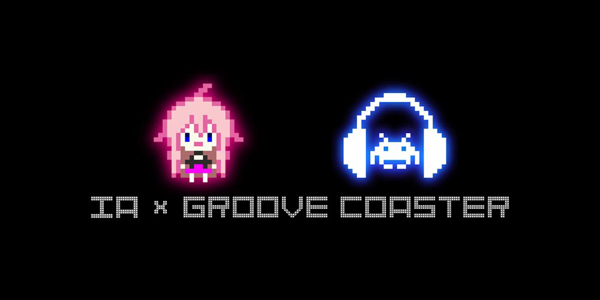 This weekend, France will play host to one of the most unique and interesting pop culture events ever concieved; The Tokyo Crazy Kawaii Paris Event. The event is intended to spread Japan’s “Kawaii” culture of cuteness and fashion across the globe (and really if you are talking fashion, where better than France). To mark this occasion TAITO Corporation (a subsidiary of Square Enix) have announced that their popular rhythm game Groove Coaster Zero will be teaming up with the character IA from Volcaloid. This isn’t the first crossover that Groove Coaster has had, as just last month they featured a crossover with Puzzle & Dragons.

The Groove Coaster/IA crossover event begins at the Crazy Kawaii Paris Event, but will continue on through to the game’s themselves. At the beginning of the expo, a free playable version the IA cover of ASY’s hit single “See the Lights,” will be available for download in the Groove Coaster Zero app. In addition to the free song, players can also grab the IA Cubeline Pack which contains Volcaloid producer JIN’s (Shizen no Teki P) “World Calling” as remixed by electro dance musician TeddyLoid as well as other IA-themed tracks by TeddyLoid and ASY.

Groove Coaster Zero is a music based rhythm game for iOS that was released last November. The game is free to play and is an updated sqeuel to 2011’s hit game Groove Coaster. If this all seems quite confusing to you then don’t worry, it took me a few reads to understand it myself. To get a better grasp on the whole thing (except for why there is a Kawaii fashion festival in the first place) then be sure to download GROOVE COASTER ZERO here. Remember for all the Groove Coaster news as it becomes available, be sure to stay tuned to Capsule Computers

“Zombie Carnival” Comes to App Store Down Under