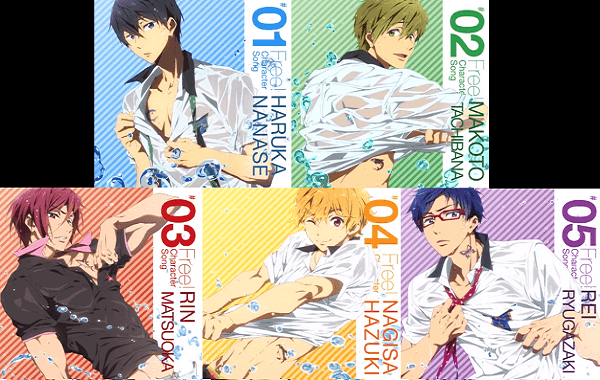 Music label company Lantis has released three preview tracks on their YouTube page in anticipation for the release of the next set of Free! Character CDs.

The popular currently airing swimming anime released two character CDs in Japan on the 7th this month and plan on releasing three more next month on the 4th. The first two CDs feature the main characters Nanase Hakura and Tachibana Makoto on the covers, both about to take of their heavily soaked shirts. The next set of character CDs will have Rin Matsuoka, Nagia Hazuki and Rei Ryugazaki on the covers.

Each CD will contain four songs will sell for around 1,200 yen ($12 USD). Certain stores will also be giving out a special Free! CD box so you can keep all the characters in one complete boxed set. Check the Video down below to hear the preview track from Rins CD.

For those that are not familiar, character CD’s are albums featuring the main characters from popular anime; each character gets their own dedicated CD with the songs performed by the voice actors/actresses of said character.