The final week of the opening round of Injustice’s Battle Arena is in play, and it’s a doozy; Superman has made his belated entry into the tournament. And two new characters are also entering the fold!

One of those is the fear mongering and controlling Sinestro, arch-nemesis to the Green Lantern, but the opposition to Superman in this round of the Battle Arena. We know Superman is vulnerable to magic, but unfortunately for Sinestro, his yellow ring of fear has been established as a product of advanced technology, not magic…and, to make things worse for him, Superman has no true fears and will not play into Sinestro’s attempted influence. Is there any way for Superman to lose this battle…?

The second battle is between the tricky expert marksman Green Arrow and the other newly revealed character, the gravity defying wielder of the Nth metal mace, Hawkgirl. This fight is much more contentious as Green Arrow has so many trick arrows to keep Hawkgirl at a distance and theoretically shut her flight and attack down, but Hawkgirl is brutal, resilient and quick-healing. Close up, Green Arrow doesn’t have a chance. Who do you think would win?

For everyone who isn’t up to date, check out the winners of week 3, week 2 and week 1. The video below features CW’s Green Arrow himself, Stephen Amell, offering his predictions and reasoning for them. Guess who he chose as the winner of the first bout…

Visit injustice.dccomics.com to cast your vote and also check out the celebrity opinions from Kevin Smith, Jason Mewes, Tara Strong and Wayne Brady. 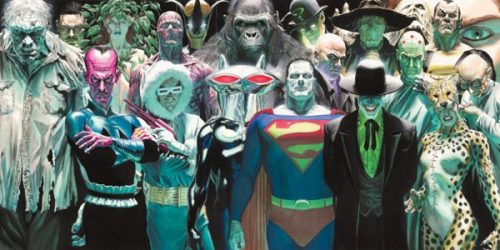