Week 3 of Warner Bros. Interactive Entertainment and DC Entertainment’s Injustice Gods Among Us ‘Battle Arena’ is now history. And here are the winners of this third batch of “Super Fights”, as voted by you, the fans:

First up we had the confrontation between Aquaman and Cyborg. Aquaman was only recently unveiled to the public through a story trailer and has been getting a lot of fan fare for his kick-ass representation in the game so far. Cyborg was one of the first characters to be announced for the game, and hasn’t really been featured since. Watch the battle video below to see if Cyborg blasted Aquaman out of the spotlight and back into the water.

The second fight of the week was between the courageous, creative and fearless Green Lantern, and the seemingly immortal, yet not necessarily unbeatable (you tell me how that works!) Solomon Grundy. Many people have had a vested interest in this fight because the resultant battle video would be the first time we’d see the Green Lantern in action. And now it’s here…check out the battle results below to find out if he could stop the powerful and relentless Grundy.

Check out Cyborg and Nightwing in action with these latest Injustice: Gods Among Us screenshots 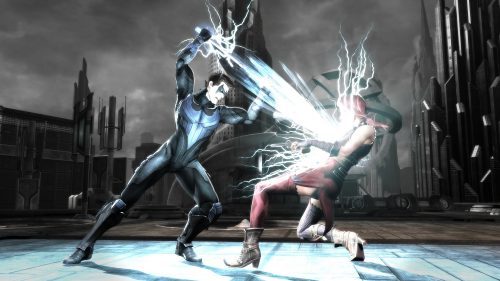