CD Projekt RED released a new teaser trailer today for Cuberpunk 2077, giving us a glimpse into this futuristic world of upgraded and implanted people. The main problem being “psychos” who are people who overuse substances and implants to give themselves an edge. When they have too many synthetic parts, the machine in them rebels and destroys anything organic around them. Find more information about the game at the Cyberpunk website. 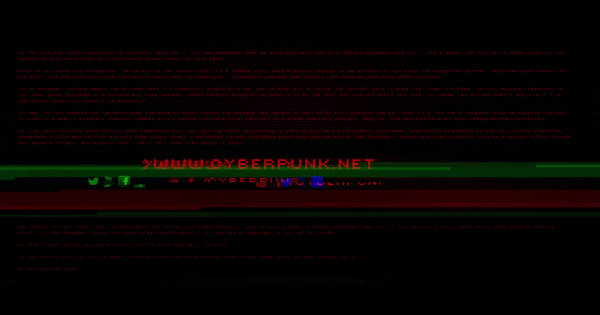 There is even a hidden message in the video if you stop at a certain point. Click on the image to see the high resolution version. There is a transcription of what it says below, originally transcribed here.

Do you like our latest creation? We certainly hope so 🙂 Yo may remember that we sometimes send you guys secret messages like this. It’s a great way for us to speak right to you instead of burying ourselves in corporate mumbo-jumbo so let’s begin!

First of all – have you noticed all the details in our teaser (yes, it’s a teaser. We’ll make a proper trailer in the future)? If you know the Cyberpunk setting there are some things you can spot, like implants – look for the weapon hands and the real skin – corporate emblems that should look familiar and more. Happy hunting!

You’re probably curious about the release date. It’s currently scheduled a way off in 2015 but in truth the delivery date is more like “when it’s done”. We will release Cyberpunk to you when we’re convinced it is nothing but pure, refined, unadulterated awesome. We want it to be the most kick ass futuristic RPG ever – OK, maybe this sounds pretty bully, but it is our actual goal! You judge if we deliver it!

Oh – and you may wonder why we announced our game so early before the release. The reason is that we’re still building our dev team so if you are a talented dude or dudette willing to work in a really different company (gamers rule & boring corporate stuff drools!) on a super ambitious project, send us your application right now!careers@cdprojektred.com

So you want to know what kind of game Cyberpunk 2077 will be? The short description is that it will be a story-heavy, nonlinear, open world RPG based on the well known Cyberpunk pen&paper system and setting. Building open world games is something we are mastering right now and we believe that properly joining nonlinear gameplay with an excellent story telling will bring a totally new quality. Mmm… We’ll tell some more about it soon!

And that’s not all that’s new. We are about the reveal our other project which is much closer to being completed and yes, it will also be a fully open-world game with an intense story. You can probably guess the game we’re talking about 🙂 On the 5th of February it will all be clear.

So stay tuned as we will have quite a lot to show and tell you soon!

We are waiting for you on our newly created forum called Afterlife – what other name could we have chosen for it?

Cyberpunk 2077 Delayed Once More to November 19 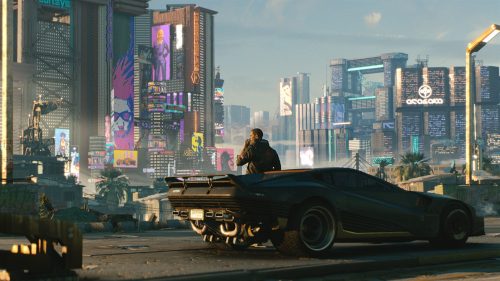 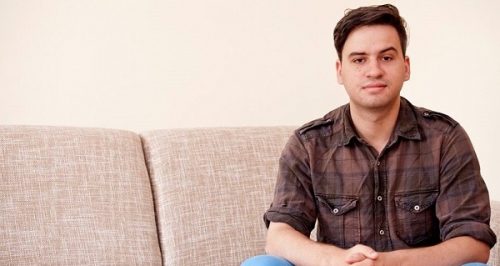