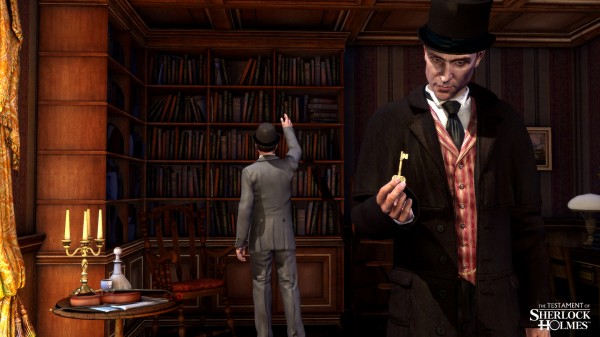 Sherlock Holmes is on a trail of clues in the new screenshots from Focus Home Interactive for upcoming game The Testament of Sherlock Holmes.  Sherlock Holmes is the ultimate adventure game character with his astounding leaps of logic and the collection of screenshots show off the title character investigating items and questioning people.  So what has the master sleuth figured out?  Well, from the make of the key above maybe Sherlock will start looking for an antique jewlery box to fit its appropriate time period and aesthetic!  Or just a gold lock, cause you know its gold.

The Testament of Sherlock Holmes is setting up to be released for XBox 360, PS3, and PC in September of this year and then all the mystery’s will be revealed.  Until then maybe take a good look at the screenshots below and come up with your own ideas of what they could lead to, then leave a comment on your own leaps of logic and the trails they could lead to.