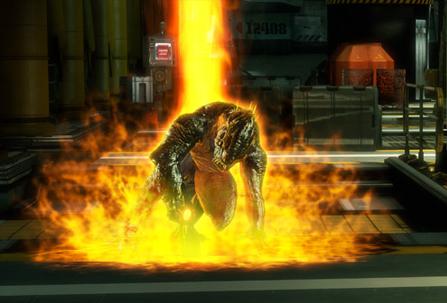 Star Trek’s upcoming video game has been common knowledge for quite some time, but Paramount and Namco Bandai are finally ready to reveal more for the upcoming blockbuster, as new enemies for the game were revealed during E3. The very lizard-like foes known in the Star Trek Universe as “The Gorn” will be a dastardly opponent with the game. Remember the ones with the zippers? The Gorn all sport venom that can poison, cause hallucinations, and even kill. There are also varied classes for the race, from the smaller infantry Gorn Rushers, to the larger Gorn Warriors and the massive Gorn Brutes, which will all pose a serious threat in the main game.

“The Gorn are among the most iconic villians in the Star Trek universe and their role in this game certainly lives up to that persona,” said Brian Miller, Senior Vice President at Paramount Pictures and Lead Game Producer. “Kirk and Spock find themselves in an incredibly challenging amount of mayhem as they confront the Gorn throughout the game.”

More than just lizard-skinned foes, the Gorn are a blood-thirsty race determined to conquer the galaxy. A true military dictatorship, the Gorn are made up of billions of self-sacrificing warriors across thousands of colonies, each focused on the conquest of alien races. By utilizing their chaos-causing infectious venom, the Gorn seed mayhem and destruction as they destroy populations and deplete planets of their resources.

“Great villains give our favorite characters a chance to become heroes in the process of attempting to eliminate a powerful threat, and Star Trek fans have been eagerly anticipating the moment when the antagonists of the game would be revealed,” said Carlson Choi, VP of Marketing at NAMCO BANDAI Games America Inc. “This is one of those moments and we couldn’t be more excited to give gamers a glimpse at the challenges that lie ahead for Kirk and Spock.”

This title is being torn right out of the 2009 flick’s lore, and will feature Kirk and Spock working together in a massive co-op adventure, across plenty of unexplored planets and enemy battleships. Yes, co-op is a strong word for Star Trek, as it was built around that kind of experience, and it looks like a damn fine game because of those gameplay stylings. Expect more coverage to come, and Star Trek the game to be out in 2013.