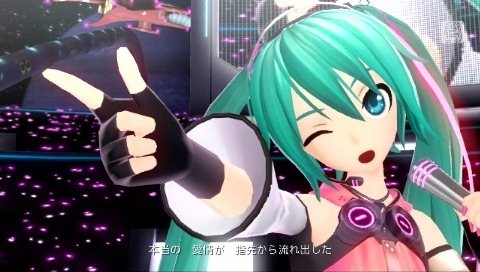 Not much information has been revealed about how many songs Hatsune Miku Project Diva f would have when it is released in Japan. That changed earlier today when pamphlets were handed out to those who attended a Hatsune Miku Project Diva f demo event in Japan. Andriasang happened to get a pamphlet herself and it just happened to contain information stating that the game would have over 30 songs and 80 different costumes.

Apparently all of the songs and costumes will be brand new to the series and six songs were originally created just for release on the game. Currently there are no plans to release the game overseas in North America, though Sega has stated they are listening to their fans. Either way, the thanks to the PlayStation Vita’s region free cartridges, the title is ripe for importation for die-hard fans.

Hatsune Miku Project Diva f to be released in March