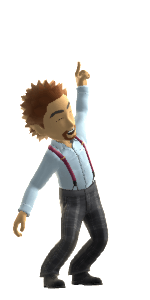 The Pipper has returned for the May update of Xbox Live News with Pipper! This time I am wearing a similar outfit that I had on at my bachelor party this previous weekend. As my avatar is making a funky pose, I am sure I was doing the same. One addition that I wish I could add to my avatar would be a ball-and-chain. I did wear on such item throughout the night, and believe me when I say that my leg was raw by the night’s end. Let’s see if the deals this week can top my bachelor experience.

As the first week has some decent deals, the latter week seems to be digging up some old games that may not interest many Xbox Live users. NIN2-Jump is one of this week’s golden eggs available for 200 MSP! Having completed this game in its entirety, I can attest to the game’s addictiveness and playability. Additionally, those who have not purchased the Battlefield Karkand could pick the map pack up for significantly less.

Here are the new releases from May 1st to May 9th.

What do you think the key features are of this week’s Xbox Live News? Minecraft is making its way to Xbox Live on May 9, and many gamers are excited to try out the block-based world on the console. Will you have your pickaxe on standby? With only a few decent titles up for grabs, many viewers are becoming outraged with Xbox Live due to the lack of popular games being discounted. Ideas have been brought forth to create a vault section for games that have been made before 2009 and allow players to download these titles for free. Stemming forth from that suggestion, gamers want discounts on relatively new material like Batman: Arkham City DLC. Keep putting on the heat, so your voices can be heard!

Thanks everyone for tuning in again for another chapter of Xbox Live News with Pipper. Always remember to rid the world of turnip hating scum, and “Play Hard or Don’t Play At All!”