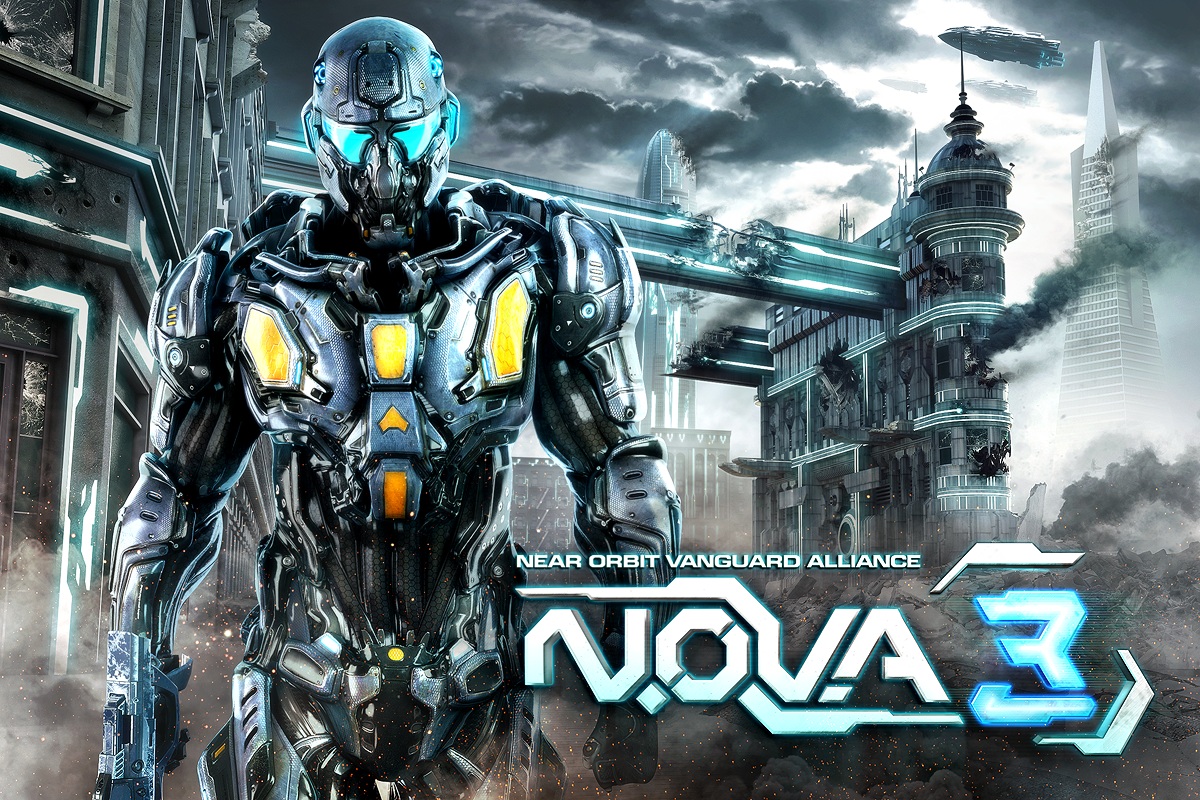 The game opens with Kal crashing his spaceship into Earth after a landing gone wrong and is soon met by other soldiers who seem to be doing battle with the games enemies, the Xenos. Players are almost immediately thrown in to do battle with the enemy in what appeared to be a short tutorial section, which I found to be quite intuitive in it’s excecution. What the developers have done here is they have included the tutorial sections in the first level on the game, so you get the feeling that you’re just playing the regular game, rather than some boring mission tacked on to the game before the actual meat begins.

The levels in N.O.V.A 3 are pretty well designed. The first level is set in a major city on Earth, and it, for some reason, gave me a reminisce of Half-Life 2, even though there was a lot more action in the overall design. Each level in NOVA 3 is broken up into sections, or checkpoints, that players go through and complete before moving on to the next checkpoint. In the first level this means that you’re travelling through the streets, through building and eventually to a military base before you’re done playing through.

Combat in this game felt quite fluid and had pretty intuitive controls for a game played entirely on a touchscreen. Gamers that have played previous Gameloft shooters will have a fair idea on what to expect from the games interface, but for those that haven’t I will quickly discuss this. Basically the left-hand side of the screen is your digital thumbstick, which you can use to move in a number of directions; on your right, you have all your combat buttons, like the shoot button, an ability button just above it, a jump button below it and a weapon button at the top used for reloading and switching weapons. Of course, some players may not like this set up, or it may be too finicky on some displays – fortunately, you are able to fully customise the screen to play how you would prefer.

One of the things I noticed during my playthrough was how nice everything looked. While I know that different devices have different technical specifications and that the game might have lower graphics than that which can be achieved on the device with the highest specifications, they are still incredibly brilliant. It’s hard to compare them to the graphics of other gaming devices, but I’d say that they’re roughly Xbox360 level at a lower resolution. Similar to the 3DS perhaps? But they were much sharper, so it’s really hard to compare. 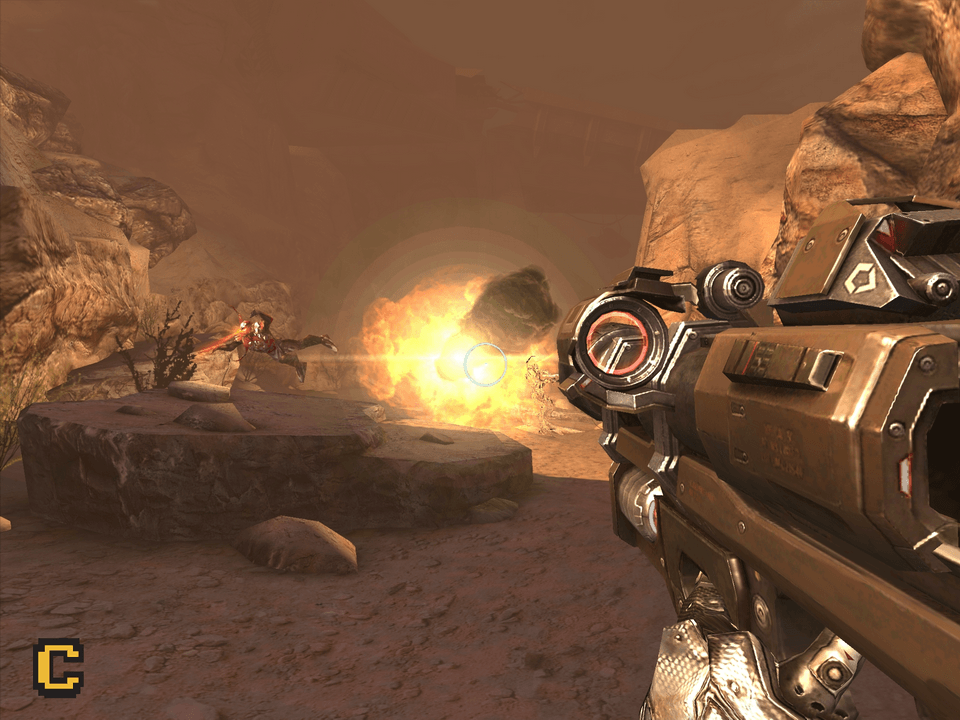 Screenshot Exclusive to CAPSULE COMPUTERS. Click to open in a new tab.

In this iteration of the series I noticed that there is a larger emphasis on abilities. Over the course of the game, players will gain access to various abilities and during my playthrough I got to manage two of these. The first is a kind of ‘Force-push’ like technique that forces enemies forward and causes them to be temporarily grounded and stunned. This is of great use in those instances where there are many enemies in front of you and you need to force your way forward quickly to avoid a quick death. The second technique I got to use is a kind of slo-mo/ bullet-time type of technique where you slow down the game to assist in you in combat. Of course, there is a price to pay for using these techniques, and they come in the form of a reduction in your shield temporarily. This introduces a kind of give and take feel to the game, where you have to decide if the trade-off is worth the outcome. Maybe using the slo-mo in a firefight with a group of enemies might better than having to keep stopping and popping, but maybe it wont be as good for a small amount of stronger enemies who will rip you apart if you fail.

Weapons are something that every soldier needs on their mission and in my session with the game, I got touch a fair few of these weapons. When you start, you have access to an Assault Rifle and a Pistol. However as you progress, you gain access to more and more weapons, such as the Shotgun, Rocket Launcher and Sniper Rifle. What I really liked about the weapon system in this game is that you could hold all of your weapons at the same time, much like classic shooters. This meant that at no time were you under-equipped for a situation, unless you had spent all of your ammo for a particular weapon. However, I found that the game was quite litterous with ammo, meaning that if I looked in the right places, I would always usually find some more.

I’m not really the most avid handheld gamer, I most definitely prefer gaming on my PC, and I find that most handheld games seem to lacking in a certain kind of grip of friction that most games need in order to keep a player interested. Fortunately, NOVA 3 has this friction and almost right from the start I was hooked. A lot of games, especially nowadays, seem to focus on trying to do everything. They want that cinematic experience, they want to be like a movie, they want to be like a game, they want a quality story that rivals Shakespearean literature. NOVA 3 knows that it is a game. This doesn’t mean that it’s lacking in any of the previous regards, it just seems like it was built with the fact that its a game in mind, instead of a run-in to contend with in the Oscars.

N.O.V.A 3 feels as though it is going to be a great game from what we’ve played of it so far and can’t wait for it to be finally released.

Additional Details for game when it launches –

Embedded below is the first Trailer for the game. 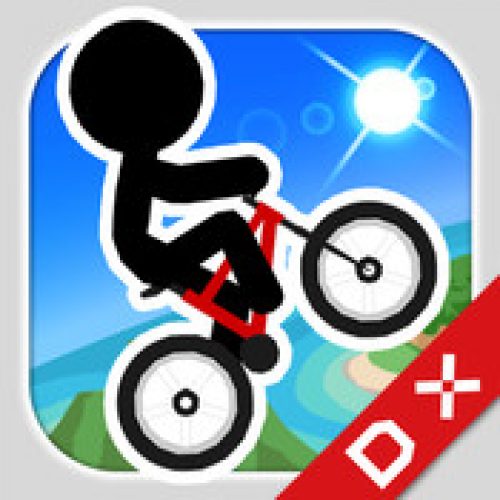