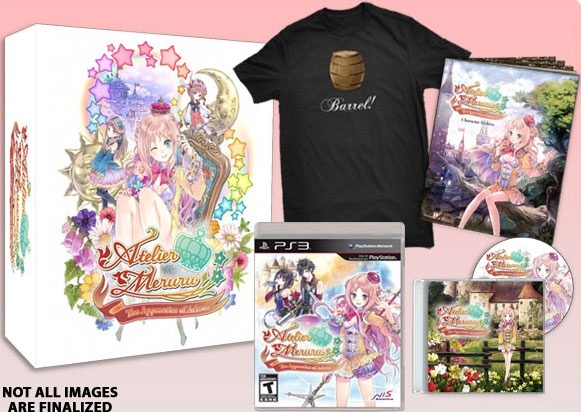 A few months ago NIS America revealed that they would be bringing the last of the Arland series of games, Atelier Meruru: The Apprentice of Arland, to North America on May 22nd and today they have made the game available for pre-order while also revealing what potential buyers will receive if they wish to spend a little extra on the limited edition version of the game.

This limited edition will contain everything seen above (though as the image says, the appearance of some of these objects may change before release) which of course includes the game itself, a (unfortunately) soft cover art book, the game’s soundtrack in what may be an actual CD case and a Large sized black “Barrel!” t-shirt. The cost of this package will run you $65 instead of the standard $50. But just take a look at that box art… it will be the perfect piece to complete your collection of Arland games.

Gaze at a beautiful batch of Atelier Meruru: The Apprentice of Arland screenshots