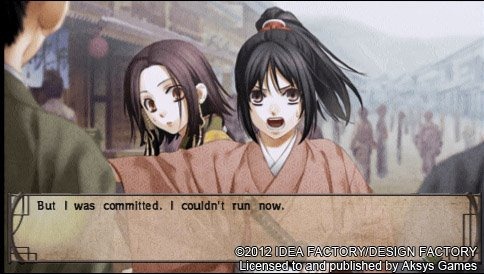 Hakuoki: Demon of the Fleeting Blossom is Aksys and North America’s first otaku game for the Playstation Portable. Set in 19th century Japan, players will control Chizuru, a young woman searching for her father in the city of Kyoto, only to be sucked into the political unrest characterised by the shogunate. Fortunately, she is placed under the protection of the Shinsengumi, who is also searching for her father. So, Chizuru has to find her father, protect herself from the violence and even try to find some romance. So, why is the game rated M in the United States? Maybe this description from the ESRB may clarify the rating:

“This is a role-playing game in which players follow the story of a girl searching for her missing father in 19th–century Japan. As the storyline unfolds, players make choices that affect interactions between specific characters. Some still-frame cutscenes depict violent acts: a woman getting bit on the neck; characters getting attacked with swords. These scenes are sometimes accompanied by cries of pain and flesh-impact sounds. Text descriptions include violent references such as “I heard the wet slice of two blades cutting into human flesh” and “. . . . [A]s I watched, the blades kept falling, carving deep lines into the corpse.” Characters are sometimes depicted with large blood stains on their bodies and/or clothing. During the course of the game, the dialogue contains some sexual references (e.g., “Didn’t think I’d be getting pushed down into bed tonight, least of all by you” and “Tell me…How is it? On top of me. Does it feel good?’); in one sequence, a man is depicted lying on top of a woman (both fully clothed) before having sex. The words “f**k” and “sh*t” appear in dialogue.”

Speaking of the romance, Aksys has revealed another man that will be possible to romance. He goes by the name of Souji Okita. He is a captain of the Shinsengumi and quite the exceptional swordsman, described as taking swordsmanship from a craft to an art. A more detailed look at the character is in a form of a digital magazine on the official webiste, hakuoki.com. Aksys promises various wallpapers on the website which will be updated each week until they are all released. Aksys also promised more goodies for the website. Sounds like an interesting game, to be honest. It is a mix of history, romance and action, all set in the Land of the Rising Sun. The game comes out in February 2012.

Dust 514 will require “cover charge” for PS3 owners to play