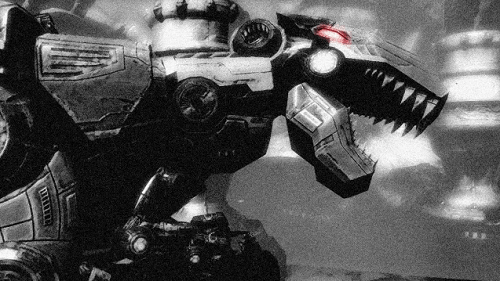 Today a teaser trailer was released for Transformers: Fall of Cybertron which is about as teaserish as possible. The trailer comes from New York Comic Con and is quite short, full of static, mostly black and white but provides everything a die-hard transformers fan would love. Namely it contains footage pretty much only of a certain dinobot seen above.

Yep, it seems that Grimlocke is making a full return in Fall of Cybertron and High Moon Studios is making the best of the characters popularity. Now they just need to make him sound the same as everyone remembers and the game will certainly be something fans will look forward to without showing anymore actual footage. Catch the video below.