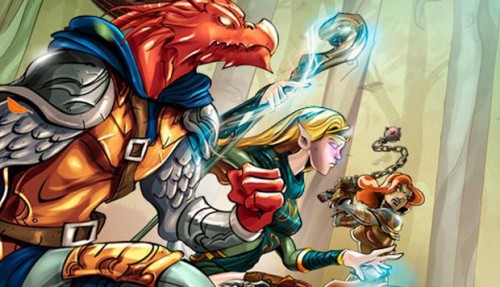 Dungeons & Dragons: Heroes of Neverwinter is the latest release into the Neverwinter universe from Atari and Liquid Entertainment. Having played the closed beta for a few days, I’ll attempt to give you a detailed rundown of how the game works so far, and throw in a bit of opinion on the way. Any questions or comments are more than welcome, and for more of an introduction to the game check out my earlier article which you can find here.

Heroes of Neverwinter lets you build a party of four to go questing with, and all of your allies are drawn from a level specific pool of other people’s characters. They only hang around for one mission though, and then it’s back off to the pub to pick up another team! Above level one your fellow adventurers will cost you to hire, either gold or some of the games buy-able currency – Astral Diamonds. Of course this means your own characters can be off adventuring without you, and upon logging into the game you might be lucky enough to receive some gold in payment for their services. There is also a gold bonus awarded for consecutive daily log ins and levels gained. 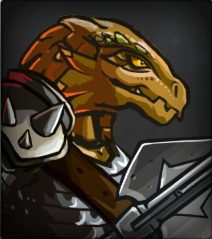 Character creation gives you the choice of a pre-made fighter, cleric, wizard or rogue, and also the option to build from scratch. Pick class and race (Dragonborn, Eladrin, Halfling, Human)set your stats and fiddle with some limited appearance options, pick a silly/serious name of your choice and you’re ready to go.  Characters can also be customised with their own motto, and along with the often entertaining names on display these, if I’m honest, usually form the basis of my party selection. I haven’t managed to remember all of my favourites, but one recurring teammate was an Eladrin Wizard going by the enticing name of ‘Skulls Will Barf’ with a motto of “Exceptional Dennis”. I got an image of someone yelling that at top of the lungs volume whilst running into battle and stuck him in my squad immediately- stats be damned.

It’s almost another layer of strategy in itself, give your character a funny or topical name/motto, get picked more, get more gold. My ‘insert generic fantasy name here’ Rogue gets far fewer recruits than Targaryen the Dragonborn fighter for example (Game of Thrones reference to those not in the know). If you happen to be online when your character is recruited you can spectate on the other players adventure, throwing in a few powers along the way. Another nice touch with the customisation is the armour and weapons. These do change in appearance when you equip different items, which gives a good level of satisfaction from acquiring them and also a nice sense of character progression. 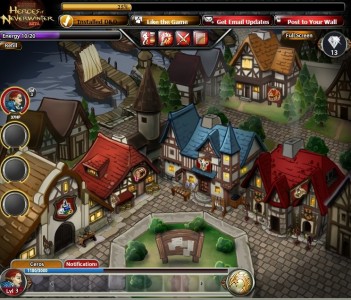 The city of Neverwinter is the game’s hub, providing a couple of merchants, a tavern for recruiting other party members, a house for your own character, a notice board and a Dungeon Workshop, which only becomes accessible after you reach level 10. At the time of writing I haven’t reached this milestone yet due to having a bit of trouble loading the game (browser swaps and cache clearing be damned, sometimes it just doesn’t load).

The notice board forms the adventure selection screen, and has a handy link back to the tavern in case you forget to pick up your allies before heading out to slay some nasties. There is a huge amount of content on offer here – with 50 unique adventures to play through over three difficulty levels. These are managed well with the easiest a newbie/casual friendly pick up and play option and Heroic being something that requires real strategy, a bulging inventory, and a little bit of luck.

The adventures themselves all come with a specific set of requirements and rewards, and from my experience thus far are forest or dungeon set. There is a good variety to the enemies and the plots of each episode are well written and add a much needed bit of depth, as well as some overarching story. It’s a nice hook to be able to follow a chain of quests to wipe out a cult, or a band of goblins, but I couldn’t help but want a bit more from the game that Facebook just can’t allow as a platform (a good sign in some respect). 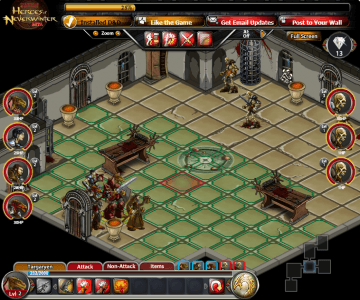 The turn based combat is solid and enjoyable, with characters having their own set of at will, once per encounter, once per adventure, and free use moves. These are built up as you level, with each one gained offering a selection of new abilities.

The actual dice based mechanics are visible when you highlight the moves, and character stats are available too, so there is definitely room for in depth play here. Characters can flank (or be flanked) for combat advantage, and ranged attacks operate by line of sight so that every movement has its significance. I definitely found myself progressing as a player as I became familiar with the system.

Loot, gold, and other expensive things…

Loot is doled out via a ‘luck of the draw’  system, where you are presented with ten face down Dungeons & Dragons cards that net you varying prizes. Pick one to reveal your choice! You get to see what you have missed out on too – I seem to have a knack for picking the smallest pile of gold available. The other big source of goodies is also an incentive for consistent play. The Chest of Wonder (that definitely begsto be said in voice over man style!) is pretty much the sole reason for your house existing, and fills with a selection of treasure every 8 hours. The quality of the loot increases with each consecutive day that the chest is emptied. There is a limit of course – once you hit five back to back empties then the quality resets back to level one. The treasure system works here exactly as it does in adventures. Aside from the daily treasure, the chest also holds onto achievement rewards and any gifts you receive from friends.

Other than gold there are two commodities in game that warrant a mention, and not for positive reasons. Both can be won but only in very small amounts, and are part of the game’s only major problem. It is something of a platform related issue, but I feel that it needs to be brought up.

Play is limited by an energy gauge, which depletes as you take on adventures which each have a specified energy cost. Depending on the adventures you choose and the treasure you find you may be able to fit in one or four missions before you either have to pay to refill the meter (using Astral Diamonds or items payed for with Astral Diamonds) or do nothing for a period to let the meter refill.  Now I don’t mind waiting, it’s a Facebook game, stuff like this is to be expected. It still breaks the immersion and defeats a lot of the point of an RPG (freedom to develop the character as you please – it’s very difficult to go off farming gold and getting the best items or example), but I enjoy the game enough to look past it.

It’s the Astral Diamonds system that gets me. Astral Diamonds are the in game currency, mainly acquired by purchasing through the Facebook credit system. $1 USD will buy you 5 Facebook credits, which in turn gives you 5 Astral Diamonds. Players can use them to hire allies, purchase items (some only available with real world cash) and refill the energy bar. A Potion of Life (revive a party member) is only available if you spend 15 Astral Diamonds on it, that’s $3! Fill the energy bar? $2. People with the cash to blow on this will be able to level up faster and get the best items for no effort. It’s unfair and it’s irritating. Charge a set amount to purchase the game then give everybody the same tools – advantage via real world wealth should never be part of a game.

A strange and fantastic place 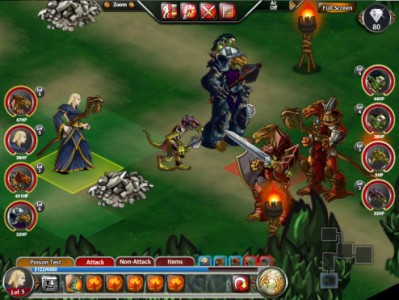 The difficulty I have in describing the presentation of this game is the platform. This is Facebook, designed for sharing photos and sending messages of basic text, not for games. Saying that, Heroes of Neverwinter looks good considering the limitations of the platform. The style fits well with the Dungeons & Dragons world and character sprites are detailed and individual. In windowed mode it all looks great, but I found that playing through the adventures themselves required using the fullscreen option, and this does stretch things to the point that all detail is lost. Of course which view you use will all be down to preference, my own reasons being that in windowed mode the rest of the Facebook page amounted to far too much clutter. The sound is, for the platform, good enough, although some of character sound effects are one note and irritating when repeated ad nauseam.

Everything is clearly laid out in menus and maps, and the game holds a surprising amount of stats and has full inventory, ability and character screens. All taken into account, Heroes of Neverwinter is a well presented game that will be both accessible to  newcomers and enjoyable to veterans. The actual D&D mechanics are present in such a way that they can be ignored or enjoyed, so full marks to Atari for making the game appeal to a broad spectrum.

For a Facebook game Dungeons and Dragons: Heroes of Neverwinter is nigh on brilliant. But that’s the issue here, every comment I make I want to preface with “for a Facebook game”. It’s not the platform for this, and although it does allow for a social element to play, the game is limited by the platform far more than it is helped.  I admire the way the game is in it’s current form and think that aside from the awful ‘pay for content’ aspect the developers couldn’t have done much better, but I would still prefer to see this buffed up and available for download on Steam, the PSN and XBLA.

Heroes of Neverwinter is currently still in closed beta, and is due to hit the open phase around September 14. Keep an eye on Capsule Computers for word of a concrete date, and as above, feel free to leave any comments below.