SMASH! 2011 was INSANE this year! After last year’s venue selling out and reaching maximum capacity, you can tell the organisers knew they were going to have to step things up, and oh man, these guys brought their A game! They put together an outstanding atmosphere for anime and manga lovers alike. It was organised nicely and everything seemed to go to plan. Here’s a quick recap of my experience for all those suckers who missed out, and for anyone who may of caught amnesia somehow since yesterday and may of forgotten the epic time they had on Saturday! 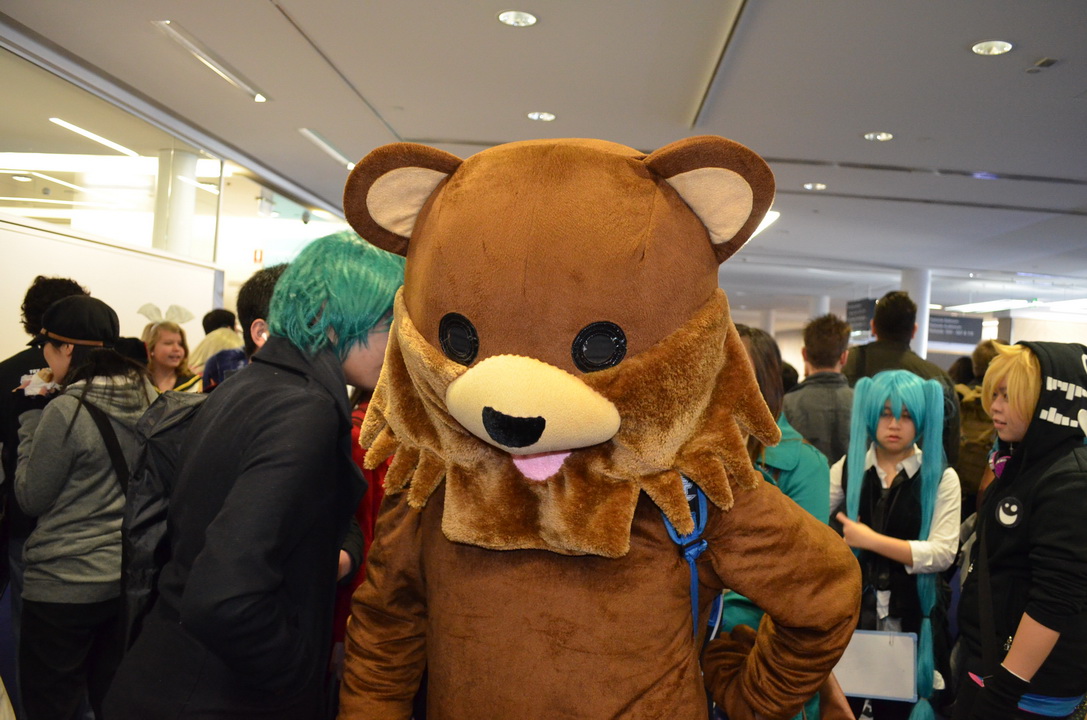 I can’t help but wonder why Pedobear has not been arrested for molesting children…and me. 🙁

From my experience the staff was both friendly and helpful, and it wasn’t hard to find a crew member to ask a question. The special guests were also friendly and super passionate and eager to answer any questions fired their way, and the attendees…oh man! Filled with otaku, hyper fanboys and fangirls, rushing back and forth for photographs and socialising. Everybody shined in their own particular way, and it was filled with excitement and things to do. One of the greatest things I enjoyed about SMASH! 2011 was the attention to detail and how they knew what to deliver to the audience they had. 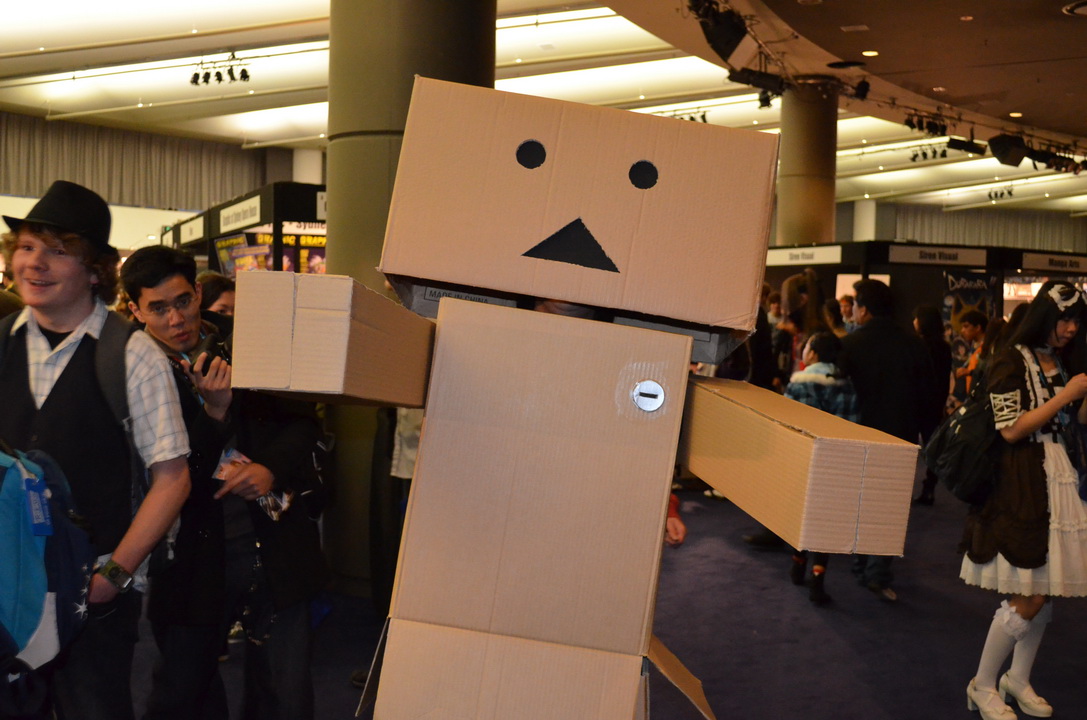 I’veheard this guy is really good at boxing!

Although pop culture is clearly getting more popular in recent years, everything at SMASH! seemed to be targeted at the hardcore audience and not the wannabes who just came there because they saw an episode of Pokemon or Dragonball Z that one time. I mean, just look at the special guests! First we had Shinichi ‘Nabeshin’ Watanabe known for Excel Saga and Puni Puni Poemy, who did a live dub in Japanese! Then we had Kenji Ito and Hiroki Kikuta, two Japanese composers known for their Square Enix works who mostly spoke of composing in Midi for the Super Nintendo, and then we had Little Kuriboh, who is known for just re-dubbing and editing episodes of Yu-Gi-Oh in his works, Yu-Gi-Oh!: The Abridged Series. The night came to a close with Eminence and Mari Yoshida preforming their Memories of Fantasia concert, preforming compositions from various film, animation and video games. The entire convention held NOTHING about Twilight or Harry Potter was seen at all. Perfect! 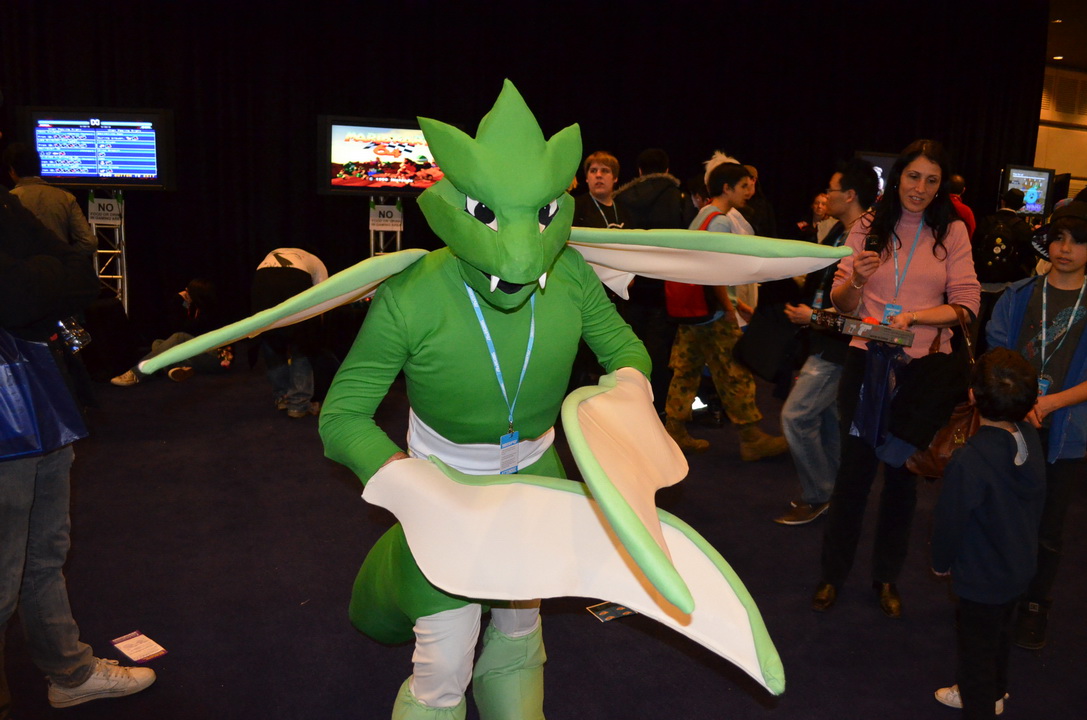 This was my personal favourite. This was made from scratch. WOW!

After greeting some cosplayers with my epic pink microphone (which wasn’t plugged into anything!) I quickly ran to grab a seat for Kenji Ito and Hiroki Kikuta where Hiroaki Yura, the founder of Eminence Symphony Orchestra, talked to us about his experience as a composer, and showed us some music he did in Midi for Ace Combatt for PSP, and also spoke about his works on various other titles, including Diablo 3. Next up was Kenji Ito and Hiroki Kikuta, who really gave us a nice look into the world of video game music composition. One particular fact that caught my attention was when Kikuta told us about working with the limitations of the Super Nintendo when he did the classic soundtrack of Secret of Mana. Apparently for a particular whale noise, he recorded a real life whale and used pre-rendered sounds to emulate it. 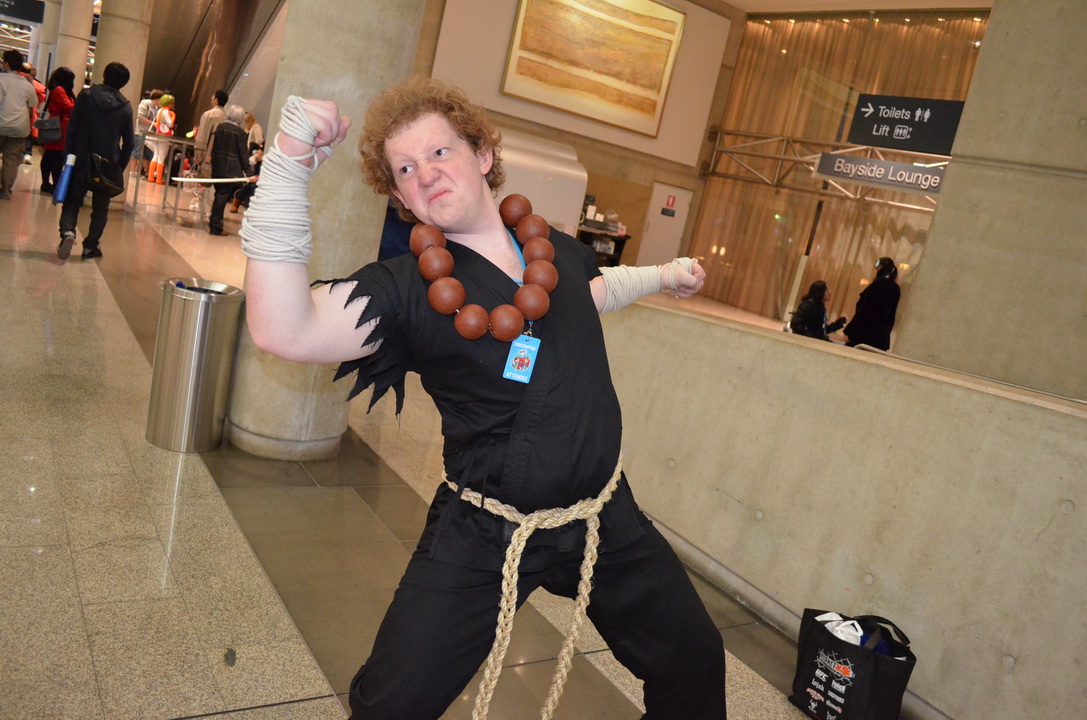 Akuma cosplayers are often like most rappers: they’re usually white guys wishing they were black.

I didn’t even bother leaving my seat because next up was the Shinichi ‘Nabeshin’ Watanabe Panel. He took the stage in his awesome Nabeshin outfit, and sporting an equally-awesome afro. He did a live dub and showed us footage of his most famous work, Excel Saga. He also informed us that the reason he always dresses like the character Nabeshin, is because it’s not clothes but rather his skin, and he loves to walk around naked. Also, he said his doctor told him to not let boys touch him. The entire panel was more focused on his love for women’s panties and gay jokes rather than his life as an anime director/voice talent, and the laughs were plenty! He also gave some advice to aspiring anime directors: get  an afro! 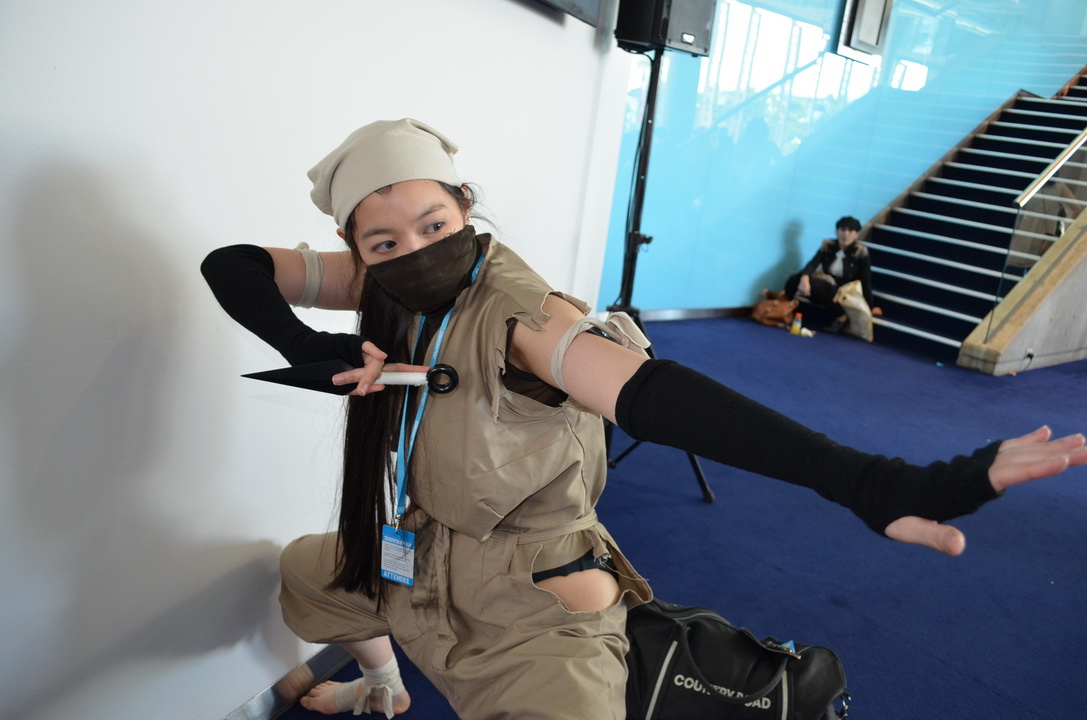 Next on the list I checked out the create-a-cast panel. One of the artists pointed to me and said “You with the sunglasses! Pick a word!” First thing I thought was “oh crap! I forgot to take them off since I was outside!” and the second thing was “Turtle!” He then got two other people to say words, which were “Spartan” and “Armadillo”. A Spartan Turtle-Armadillo was then drawn, and it was amazing. I can’t believe I didn’t take a picture! I can’t recall the other two, but one of them was some form of evil cupcake. I also caught a couple of minuets of the Little Kuriboh Panel, and I was blown away! It felt like I was at some sort of rock concert with everybody screaming, and I swear the line to the microphone to ask him questions reminded me of a mosh pit! But I couldn’t stick around for long, I had to go check out the Street Fighter 2 tournament! 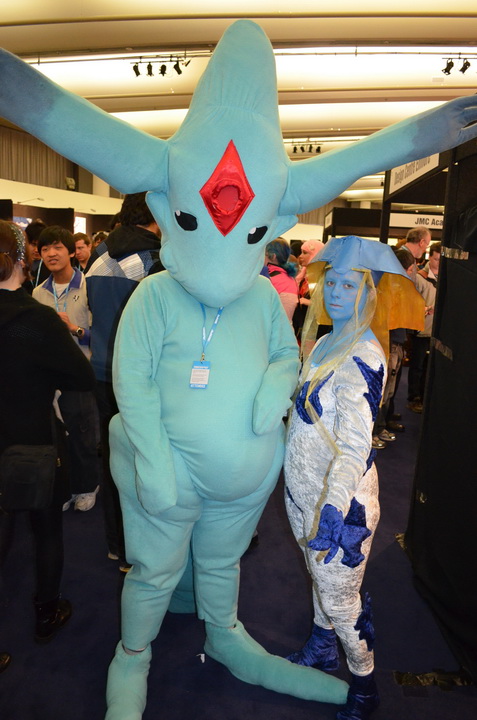 I caught the first few matches of Street Fighter 2, and it was easy to pick the experienced players from the noobs. I didn’t watch all 64 people duke it out though, I left to check out a little bit of the Madman panel with my fellow editor Luke, and then we had to quickly run to meet the rest of the Capsule Computers crew to make our a scheduled booking at the SMASH! Photo booth. We were one of the many attenedees who grabbed a FREE professional studio photo shoot that looked epic. Well, everyone except MasterAbott of coarse, who couldn’t be found because he was covering the Mario Kart competition which you can see here. The photos turned out pretty awesome though, we even got a shot of me jumping in mid-air, just saying! 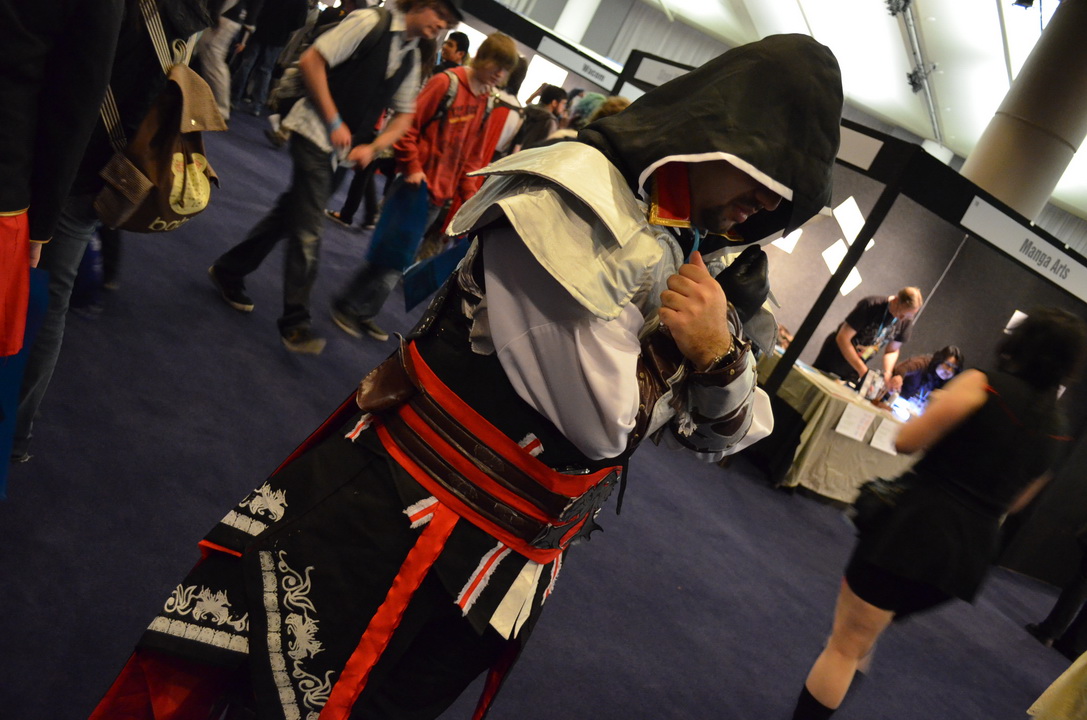 I was scared at first to talk to an assasin, but then I figured, when in Rome…

I spent the rest of my day checking back in every now-and-then for the Street Fighter Tournament and checking out the floor and it’s various booths. One in particular that interested me was Parranoia, which is a small Parramatta-based organisation spreading awareness of anime, founded by some students at the University of Western Sydney. Nice! I then checked out the cosplay competition and was blown away by the amount of people that packed out the place. It was huge! There were heaps of creative costumes and hilarious acts, one of which was a dance based on The Idol M@ster 2. The judges were what made the night for me though, they were hilarious and great at hosting the event, and began the night with a parady of aussie hip-hop group Hilltop Hoods’ hit song ‘The Nosebleed Section’. Somebody somewhere was smarter than me and recorded it for youtube, you can see that here. 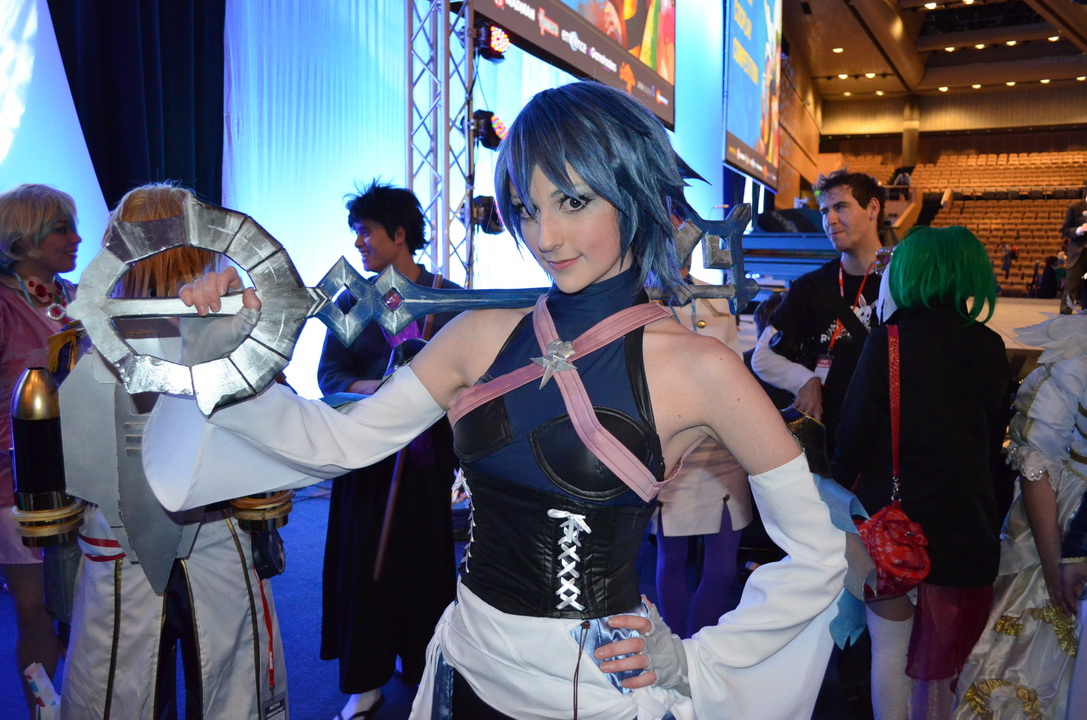 I don’t know who this girl is, but she can have the key(blade) to my heart.

I didn’t get the chance to catch the winners of the cosplay contest, but I did get the chance to see the final round and meet the winner of the Street Fighter 2 Tournament. Her name was Chyna and cosplayed as Chun Li, even though she played as Guile! You can check out that interview here. I then had a few minuets to leave before the place shut down, so I quickly spoke to a few more cosplayers and got the chance to even meet the winner of the ‘Judge’s pick’ award for the cosplay competition. Her name was Reggie and she cosplayed as Card Captor Sakarua, and she and her costume both looked outstanding! 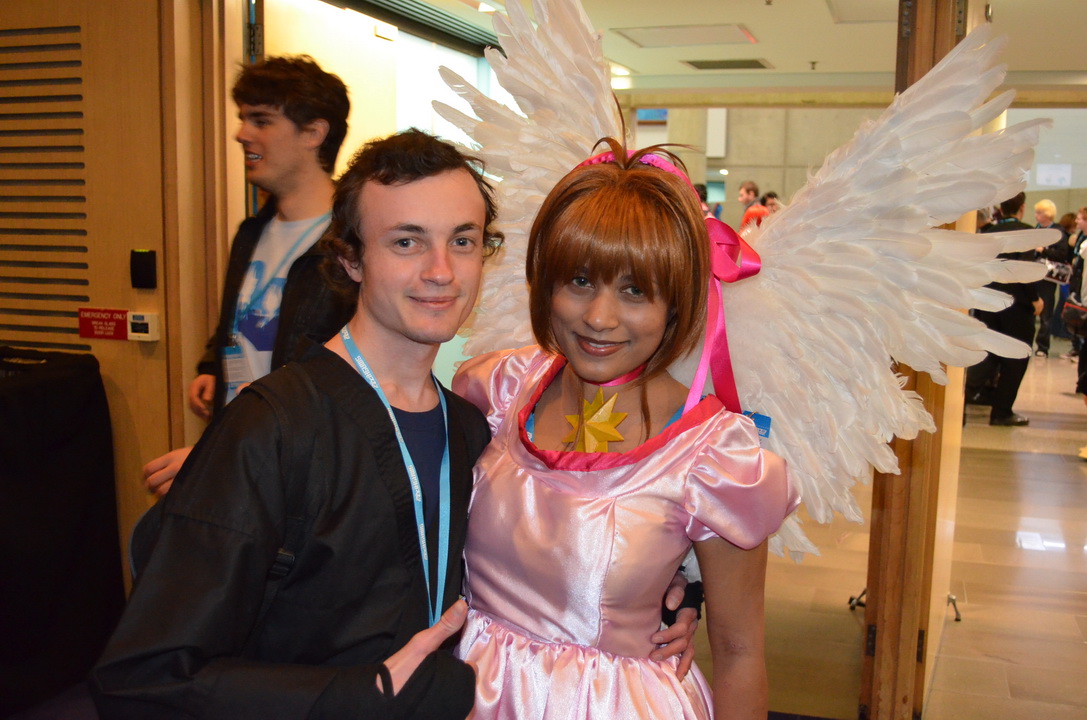 LinkageAX and I both agree: the judge’s pick of the cosplay competition, Reggie, looks like an angel.

Overall the day was amazing, I hate myself for not being able to stay for the Eminence concert! I did hear however that it was amazing. Overall SMASH 2011 was definitely the most fun I’ve had at a convention in a long time. The atmosphere was great, the staff were nice, the guests were passionate and there was always something to do. The team on the most part well organised and everybody was more than pleased with the venue. Looking VERY forward to next year, where we plan to have more editors and more cameras storming the floor for an even more extensive coverage of SMASH!, so make sure you stick by us, ok? Hope you enjoyed this recap, don’t forget to comment on all our SMASH! articles and tell us about your experiences, and by adding us on Facebook and Twitter! We also have more articles and videos of this year’s convention coming within the next few days so keep an eye out for them! 🙂 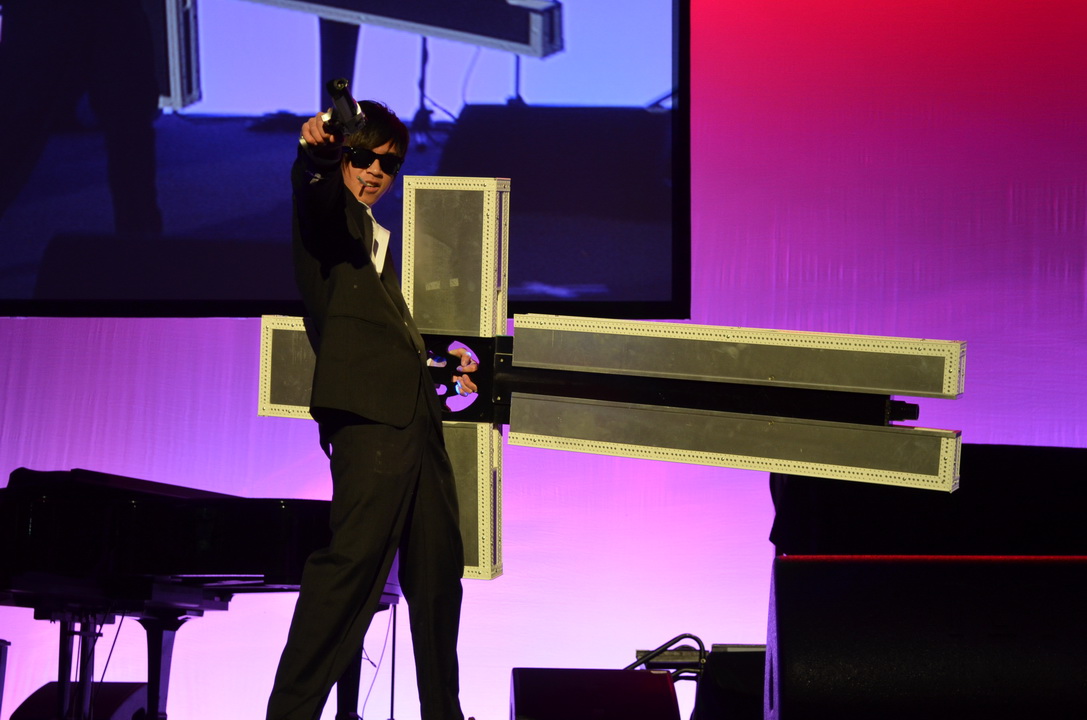 Now Im not 100% sure, but Im pretty sure this dude is dude is cosplaying as Jesus from Passion of the Christ. I think.