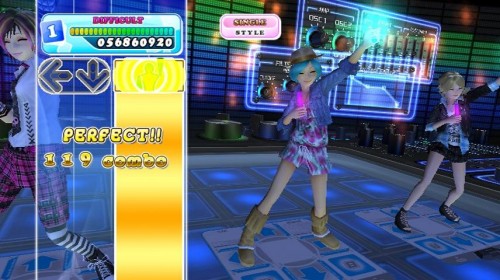 Before titles like Just Dance and Dance Central took over the scene of dance game genre, the DanceDanceRevolution series was the true innovator and opened the doors for those said titles years ago when we were sticking our quarters in arcade machines to get a dancing fix. Konami have now released some new information on the latest title in the franchise which is coming to the Wii, DanceDanceRevolution Hottest Party 4, and by the look of it we could very well see the franchise back on top with this installment.

As well as using the standard dance mat (or balance board), Hottest Party 4 will have full body controls which will let players take the WiiMote and Nunchuck as well as the pad/board peripherals to create a full on dancing experience for the Wii. This method of play is being targeted to all dance genre fans as well as veterans of the famed series to bring a bit more depth to the game itself.

Up to four players will be able to compete at once, trying to rack up the highest scores possible with the game. The music of course is boasting to be one of the series strongest yet as well, with tracks such as Lady Gaga’s ‘Bad Romance’, Paramore’s ‘CrushCrushCrush’ and the classic ‘Celebration’ from Kool and the Gang. 30 other Konami tracks will also be featured all specifically designed to test the players co-ordination and rhythm. A calorie counter will also be available in the title, letting players who want to concentrate on fitness get their fix in as well.

I really like the idea of having the pad represented as well as the motion hand controls with the nunchuck and WiiMote, and this very well could get games like Just Dance to integrate more of a full body control into their titles like we see here. Of course Konami have literally pioneered the genre with DDR over the years, so I am happy to see that they will be behind what could be a massive step up from the hand-only dance titles on the Wii. DanceDanceRevolution Hottest Party 4 Launches on April 28th.