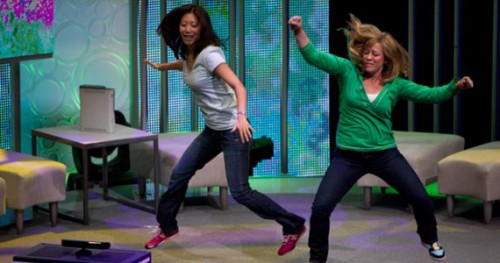 With the release of Sony’s and Microsoft’s motion peripherals there seems to be a bit of a re-ignition of the console wars in the form of “which motion control is better?”.  Some would say the Wii because it did motion control first so…therefor it’s better?  Don’t get the reasoning there.  Some would say the Move because it takes the best of both worlds, it has a physical controller like the Wii only much more precise and actually does, roughly, 1:1 movement instead of just pre-determined commands based on the waggle (Wii) and also has a camera to aid with said superior motion tracking.  But no, one person knows the truth, the truth that the absolute pinnacle of motion gaming and technical prowess is by far the Kinect.  Not only does it take away the requirement to use one of these newfangled controllers with hundreds of buttons (I mean who can be bothered to remember what ALL of those buttons do!) but it’s games are so smart and technologically superior that they not only track your movements, but your THOUGHTS!  What other explanation would there be for the unbelievable feats performed in this video (also embedded below)

As you can see, either the genius’s over at Microsoft have discovered how to read your mind and has put such knowledge to use via Kinect or Youtube user “GELTONZ” has mastered telekinetic, or rather “teleKinectic”, powers.  This video definitely isn’t showing Kinect game Joy Ride using a hefty amount of autosteering to effectively finish a race in 3rd place with absolutely no intervention from the player.  And if it was, then how AWESOME is that!  Who wants to waste precious energy playing a game when all you have to do is watch it play itself!  I can’t wait to see what the future of this motion gaming fad brings, I mean what’s next?  No user input at all?  What if the future of games was just consumers buying a console that costs several hundred dollars, a peripheral for said console that also costs several hundred dollars, a game that costs over $50 and the entire game would be played and streamed to the console from a guy AT the company who made the console!  No more having to struggle to beat all these impossible and time consuming games.  Trying to beat the final boss?  More like sit back while you watch your game being played for you while you have a beer!  Ahhh technology is so great.

Bravo Mircosoft, you clever genius’s you.