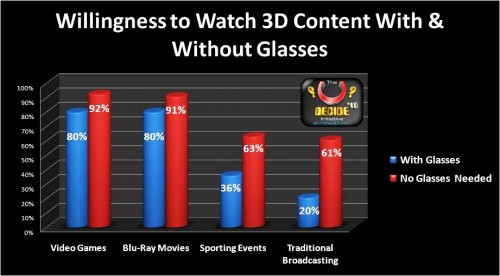 With the 3DS coming out early next year, with the PS3 giving firmware updates and developing games to support 3D gaming, and with televisions already being made today that can show 3D programming; 3D is invading nearly every aspect of our lives, literally, if you have the cash to spend on the newly developed technology.

Though one thing that comes with 3D, is that you have to wear those special glasses to experience it. The 3DS has been reported to not require any glasses to give players this experience which will obviously make it more popular, because wearing 3D glasses in public went out with the 50’s.

But according to a survey by the U-Decide Initiative that won’t even be much of a deciding factor. In a survey directed at gamers only, both PC and console, 80% of us would be more than willing enough to wear 3D glasses to experience the 3D, while a whopping 92% would be ready to see it without the glasses. The figures are nearly the same when compared to the Blu-Ray result, though as the media falls away from gaming into normal TV the willingness to wear the glasses drops sharply compared to no glasses 3D.

A number of different polls also explain whether or not gamers would be willing to purchase a new HDTV over the one they already have, or if they would be willing to shell out the cash needed for a 3D HDTV. Also included are figures of how the 3D branding will push game sales, which show that gamers are more or less split between purchasing 3D over 2D. Though this survey takes into account that you already own a 3D capable TV. Which if I had a 3D TV, I would be more than willing to take advantage over it’s 3D ability. 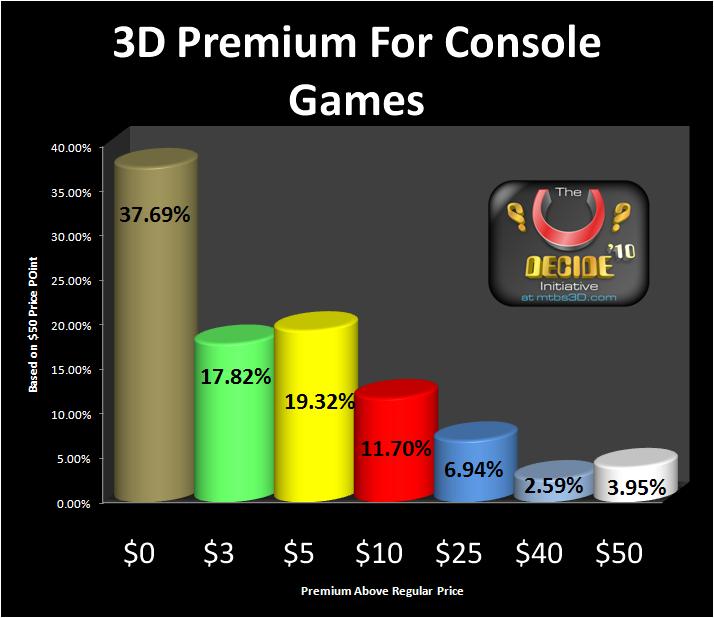 Also it appears that as long as 3D is an added feature that costs no additional fee, players will jump all over it. Even if it was only a small nominal fee added on, then it won’t hurt sales too much. But when the fee reaches over $10 sales drop dramatically.

Take a look at U-Decide Initiative’s website to see all the various graphs provided.