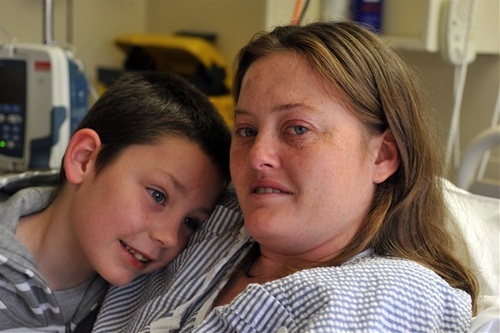 I was directed to this story by a title much like the one that directed you here.

My son, my hero [Bendigo Advertiser]

That story above describes how a little boy saved his mother from a wreck, after the mom avoided a kangaroo. Did I mention this took place in Australia? So the Kangaroo isn’t as out of place as you might think.

What got me is the emphasis on the DS. The boy used the light from the DS to save his mother. In reality, the boy didn’t do anything. This is what happened. (The entire story below is completely fictional, and should only be considered as humorous or stupid. Do not take it seriously.)

The both parents were drunk and the Kangaroo was High. The Kangaroo’s friend told the Kangaroo to play chicken with the car. The Dad clearly lost and ended up flipping the car. The boy was in the backseat with out his seat belt on while playing the DS. For some reason he was the only one who managed to not be trapped by the car, so this is why he didn’t have his seat belt on. Why is the mom drunk? Because the boy had to use his DS to find the mom’s phone and then give it to her so that she could call 911. When is a phone not in your pocket or purse? NEVER!

The next problem is why so much emphasis put on the DS? It was just used as a light and nothing more. I could use my watch or even my Cell phone to find my mom’s Cell phone so that she can Dial 911. This boy is getting a medal for doing what people do for their parents all the time. Wouldn’t you die for your mom? I know I would, but where is my medal? Must be an Australian thing.

Parts of the story simply don’t line up correctly, and this boy shouldn’t be receiving a medal. MasterAbbott is probably going to climb over to this post and say how I’m just jealous of Australia and their heroic people. Well, if the story makes so much sense why don’t I point out one major flaw.

How does a little boy pull his pinned mom out of the car after she calls for 911 if she was unable to get herself out.

Bet no one noticed that little tidbit. I say the entire thing was a hoax in order to make this kid famous and in turn the entire family. Kind of like the balloon kid we had here in America. People will do anything to get famous. I bet no one even thought about asking the Kangaroo what happened, he could tell you everything!