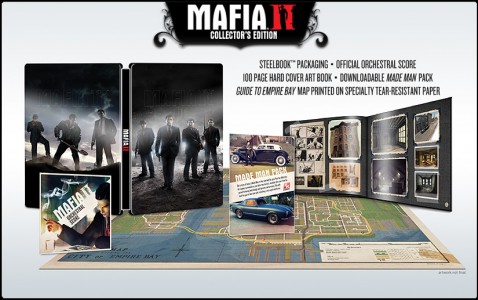 Looks like 2K games has announced the special collector’s edition that is available for Mafia II. After a very long developmental period with some troubles, the game is finally slated for release on August 24th. The collector’s edition won’t include anything that will set it apart from everything else however.

An art book, soundtrack, and fancy steel case will round out most of the material aspects. But it also comes packaged with a “high quality, tear-resistant map” of Empire Bay. Something similar to what we’ve seen in Oblivion’s special edition however that map was hardly tear resistant and I’ve seen people tear the edges simply by unfolding it. For digital in game contact there is a Made Men Pack that will include two fancy cars and a tuxedo to look expensive when you shake down a business.

Also there are pre-order bonuses from various retailers.

Depends on what you are looking for in a bonus then if you want to pre-order the game. Gamestop offering the military style vehicles and outfits should make for an interesting game addition. Nothing says authority like doing a drive-by in a military jeep and uniform.