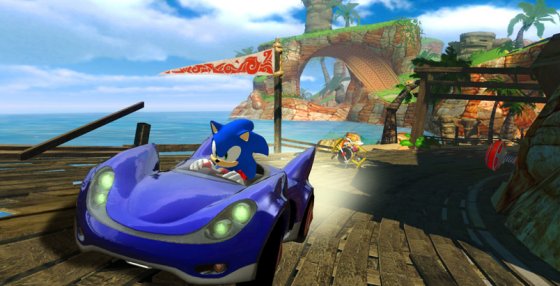 It’s slipped in under the radar, as most of us are plugging away at Battlefield Bad Company 2.  Sega’s new Sonic & Sega All Star Racing has arrived and is doing victory laps as we speak.

Join all the popular Sega characters in this great fast paced racing game suitable for the whole family to enjoy.

Sega & Sonic All-Stars Racing is also priced quite reasonably why not pick it up for kids and also the BIG kids as well, easy to play and certainly very fun, it supports local and multiplayer as well so you can get online and whack everyone with Banjo’s Jiggis or Roy’s forklift.

Fishpond have a great deal at them moment and if you live in Australia you also get FREE delivery !!

Click on any of the links to buy from Fishpond :

Who’s already picked this up ?  Or who’s gonna buy it now.  What do you guys think of it ?