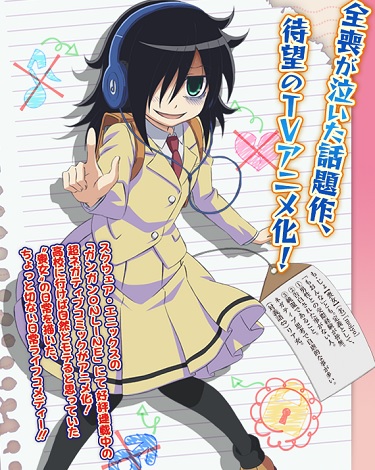 With Anime Expo wrapping up Sentai Filmworks still had a few more anime licenses to announce and one of these happens to be for an anime that many people have been excited for, WataMote. Well, technically the anime translates into No Matter How I Look at It, It’s You Guys’ Fault I’m Not Popular! but Watamote is simpler.

Anyways, the anime is set to be released sometime in 2014 and is an adaptation of a slice of life comedy manga that follows Tomoko Kuroki, an extremely unpopular girl who has a strange outlook on life thanks to the number of otome games that she has played in the past and must now live in a cruel reality with only her delusions to comfort her.