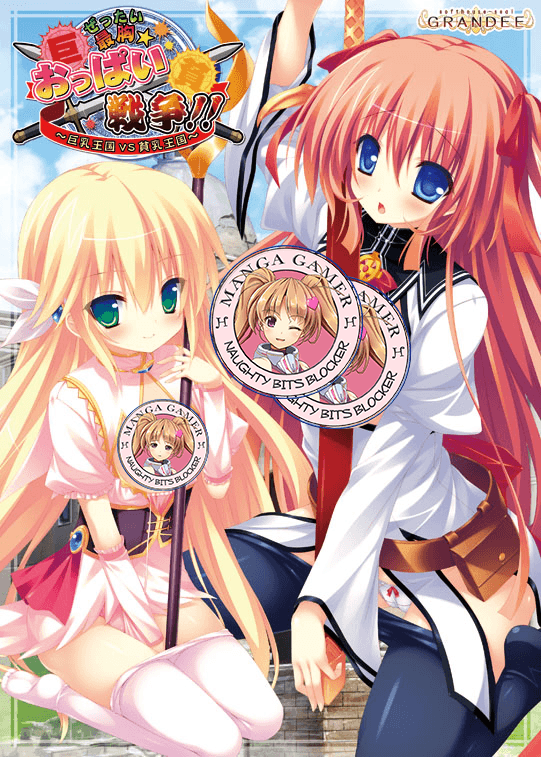 Overview
Among the various titles that MangaGamer has in their line-up, many of their titles are adult oriented. Of these titles there are eroge visual novels which tend to focus more on providing players with a storyline and nukige visual novels where the story usually takes a back seat to the action happening between the main character and the girls in the game. Ultimate Boob Wars!! may be a nukige, but it is priced higher than other titles following the same theme. As such, does Ultimate Boob Wars!! justify its price tag by the amount of content it has to offer?

Story
Those familiar with softhouse-seal’s games as well as past MangaGamer titles probably have seen that this is not the first Boob Wars title to be released in English by the company. However the story for these titles do not connect in the slightest, though the theme between the games remains the same. 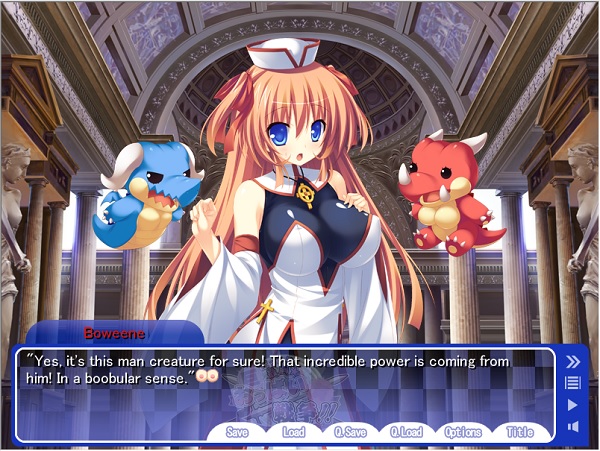 Anyways, the story of Ultimate Boob Wars!! takes place on the continent of Bustchest where two kingdoms rule the land. On the western side of the continent the Kingdom of Piequartz is occupied by the Big Breast Tribe who take pride in their strength and skills while the eastern side is controlled by the Serpettane Kingdom, a nation of the Flat Chest Tribe that takes pride in their knowledge and skill with magic.

The kingdoms are joined by the Chest Flatlands and every ten years these nations join together to hold a celebration together to reaffirm their friendship. At this celebration a ceremony is performed where each tribe’s maiden will summon their goddess, for Piequartz worships the large breasted dragon Boweene and Serpettane worships the smaller-chested Petan.

However one year when these deities were summoned, they began a terrible battle with one another and split the land asunder, causing a giant rift between the nations in what has been called the Tittynomachia. With both nations believing the other side was in the wrong, a brutal hatred began growing between the nations. After many years of silence and the deities no longer responding to their prayers, the nations have been joined once again and the great boob wars have begun with no end in sight. 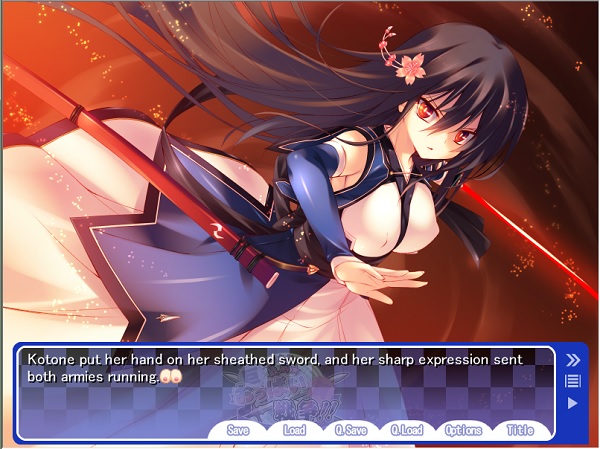 Players take on the role of a traveling swordsman Haruto. Thanks to his traveling lifestyle and upbringing, Haruto holds no ill-will for any breast size and loves all breasts equally. One day when he is nearly about to die, he stumbles upon Piequartz’s shrine only to find himself tasked with a role he seems to have been born for. You see Boweene and Petan have returned and have given Haruto the task of becoming the savior that will end the war and bring peace to Bustchest and the only way to do it is to gather enough boob energy to accomplish the task.

Haruto is not alone on his journey as the two diminutive deities are traveling with him as well as Piequartz’s shrine maiden and his “personal boobs” Milpha and a member of the Flat Chest Tribe named Iris. After being introduced to the six main heroines in the game it is then up to the player to choose what path they wish to follow.

I say choose, but the decisions made in Ultimate Boob Wars!! are fairly simplistic. Despite there being ten different endings available in the game there are only three endings that actually require a bit of work to unlock and a bad end that can only really be obtained if you choose to fail on purpose as the game’s story begins to point to a new threat on the horizon the longer the player takes on picking their main heroine. 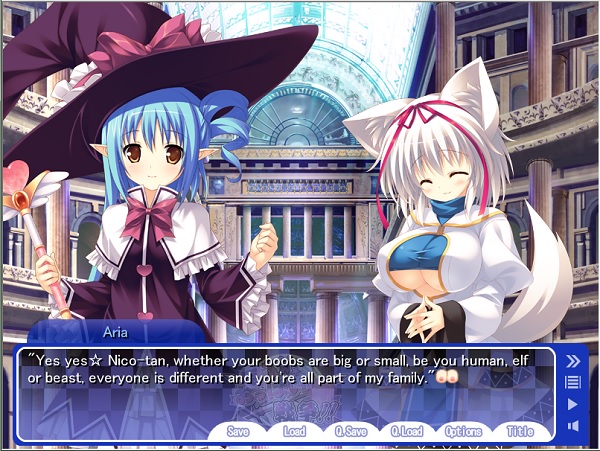 With six different girls to choose from, and a couple of side characters that the player can also interact with, there is a little something for everyone as each girl has a certain trait to them and a different ending. The story for each girl may be a bit simplistic but they are explored more than your average nukige title and although every interaction ends up revolving around some form of sex, there is some sign of progression in their little arcs, almost always culminating in a happy ending with the chosen heroine or faction.

It is funny to note that almost every area, outside of the strongholds of each nation, are named after various breast related terms such as Washboard Village and Barely-There Village on the Serpettane side of the continent and Grand Decolletage on the Piequartz side and the Cleave Field separating the two. Breast puns and various nick-names for boob sizes run rampant in Ultimate Boob Wars!! as everyday food items designed to look like breasts have boob names. 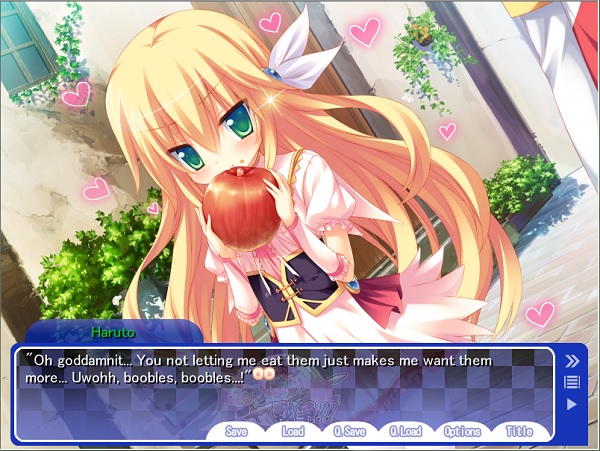 This same comedic note runs rampant throughout the character’s storylines as well as a few of the girls Haruto interacts with are either complete ditzs or have various delusions about themselves, especially in regards to a side-character named Aria and a main heroin named Chocolat, though most of the game’s humor comes from Haruto’s insatiable appetite for breasts and his interactions with those around him. It is worth noting that a lot of the humor is tongue-in-cheek and meant to be taken as light-hearted.

Gameplay
As one would expect with a visual novel, there is no real gameplay to be had outside of reading the text on the screen and making a few choices here and there. Unlike its predecessor, there is no card combat in Ultimate Boob Wars!! and instead players will be making choices based on a map they are provided every day which shows the location of each girl they can interact with on Bustchest. 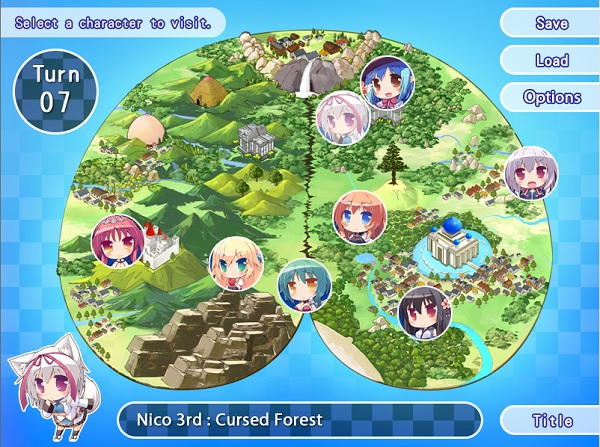 As mentioned above, while Ultimate Boob Wars!! has more story content and routes than your average nukige, is it still at heart a nukige. This means that the game mostly involves a whole lot of sex with the characters they are interacting with. Players are given nineteen turns to work with, though a number of turns are used at the start of the game to introduce all of the main heroines to the player and as they select a girl to interact with on any given day, their story will advance and it is also possible to unlock side characters by interacting with certain girls.

Now as for that interaction with the girls… the game is bursting with content in that regard. Where your average visual novel may have a few scenes and a nukige will have a few for each girl, Ultimate Boob Wars!! lives up to its name by providing sixty six different sex scenes with the girls in the game. These scenes cover a wide range of fetishes though despite what the game may seem like at times, almost every scene in the game is vanilla and doesn’t do too much outside of some female on male sadism and wagers placed on duels, though the bad end does result in Haruto being placed in a bad situation. 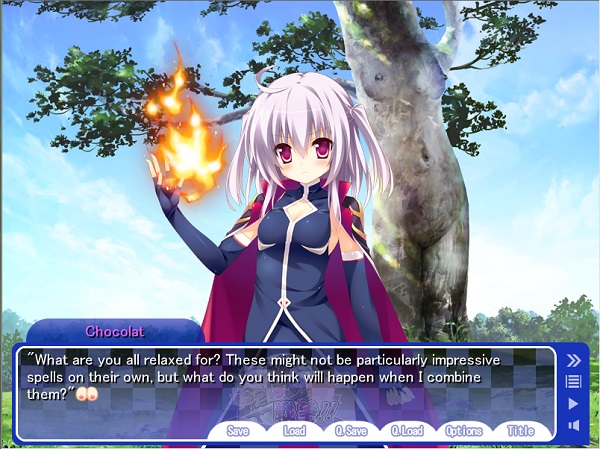 As for the sex scenes themselves, they are well presented and actually have an element that caught me by surprise the first time it appeared which I will discuss momentarily. There is a generic choice in most scenes to make, though this choice can be pre-set in the options menu, but it doesn’t matter what the player chooses as the only difference will be the CG shown at the end of things, while both variations of the CG end up unlocked at the main menu anyways.

As for the actual structure of the game, the translation seems to be very adequate and it is clear that MangaGamer had a lot of fun translating all of the boob names and breast jokes into English, including a highlight where the two breast deities are singing a song about titties of different sizes. The game does have a few instances of bugs however, as one of Milpha’s first scenes had a line of dialogue pop up that had nothing to do with the scene and did not depict anything occurring in said scene and later on in the game during one of the ending sequences the text and the name display fell out of sync with one another, displaying either the wrong character speaking or showing a character talking while it was describing the event. 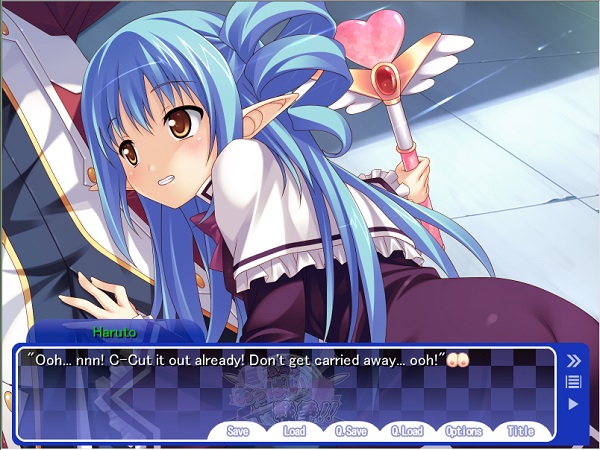 As for the actual visuals in the game, every sex scene in Ultimate Boob Wars!! is uncensored and true to the game’s theme most of the girls on offer are either incredibly busty or extremely flat, with one girl in-between and each girl having a different sexual trait. The characters are rather simply designed for a game such as this, though their in-scene faces are nicely detailed with erotic expressions and a nice attention to detail on certain pieces of clothing as well as on their bodies when it comes to sweat and other fluids. Outside of the sex scenes each girls’ basic talking portrait only has a few variations to change things up as they react to the dialogue, which is disappointing.

Audio
Although relatively standard, it is a nice plus that Ultimate Boob Wars!! comes with its entire Japanese voice track intact. Every named character in the game is voiced, outside of Haruto of course, and the voice work is actually rather impressive with a character’s voice fitting their design and personality perfectly.

As far as background music is concerned, it is largely forgettable though the player can choose to listen to a theme they like at the main menu. It is worth noting though that, for some reason, the intro theme for the game “Triangle Scramble!” is really catchy and easily my favorite of the bunch.

Overall
Ultimate Boob Wars!! may be a nukige at heart, but there is a reason that this game fits in under softhouse-seal’s “grandee” label as this title packs more sex scenes than three average nukige put together. The story may not be the strongest point in the game but it is nice that there is a ludicrous set up to fit with the goal that the player has in the game. It is almost refreshing to see a game so unabashed to clearly present its goal like Ultimate Boob Wars!! does, even if it is a hentai game in the end. Ultimate Boob Wars!! has a few flaws and it’s price tag is still a bit much, it offers a lot of replayability with numerous routes to pursue and plenty of comedy and puns to laugh at while trying to save the world with boob energy.