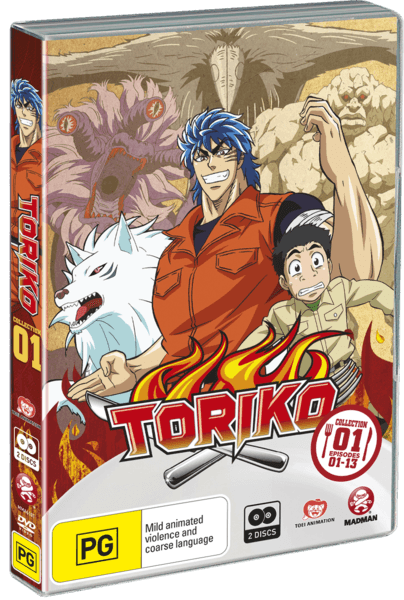 Overview
As one of the most popular shonen manga of all time, the jump to anime was just a matter of time for Toriko. The popularity of the genre in both eastern and western markets is undeniable, but is Toriko a refreshing slice of action or is it following a stale formula? 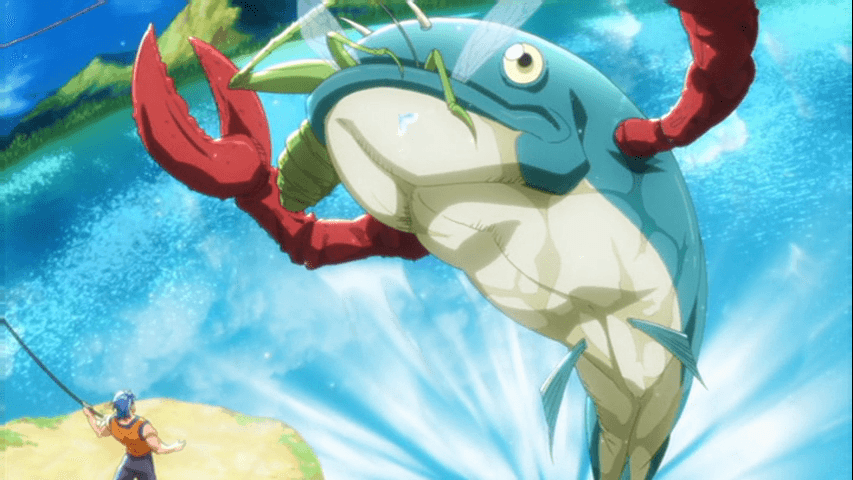 Dear Cod, let’s cray that the cricket is alright

Story
“This is the Gourmet Age, where the world’s manliest heroes quest for yet undiscovered culinary delights”
Welcome to the world of Toriko. A world in which food is the centre of culture, business and everything in between. A world where it has been said that there exist mountains of ice cream, rivers of yoghurt and flora such as the four leaf cloverger. Also there are ten tonne terrors that that are as dangerous as they are ridiculous, on the plus side most of them are delicious though.

Toriko himself is a Gourmet Hunter and his job is to seek out rare and dangerous ingredients. Following his own moral code, he possesses an “Eat what you Defeat” mentality and respects the creatures he defeats. His main drive is to complete his Full Course Menu of Life, the goal of every Gourmet Hunter, an eight course meal containing the ingredients dubbed perfect by each individual hunter. Already established as a hunter of great repute, Collection 1 follows Toriko as he journeys with his new companion Komatsu. Having met in episode 1, the two become fast friends and travel the world meeting, then eating, many creatures in a monster-of-the-week format. The sheer size and power of these creatures creates great fight scenes that immediately express the strength of anyone that can just survive a confrontation, let alone flip and slice one. 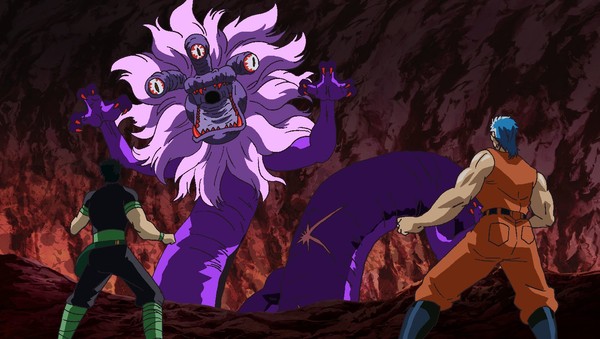 This Demon Snake is about to get pythowned

As the episodes progress, the details of a larger plot begin to rise amidst the culinary carnage. A sinister organisation known as the Gourmet Corps, wishes to gain monopoly over the greatest ingredients in the world. Whether this is for power or monetary gain is yet to be fully explored, but they remain a devious and mysterious enemy. Also introduced throughout Collection 1 are a cadre of secondary characters, ranging from newcomers to legendary allies. Both regular people and gourmet powerhouses are added to the fray and each have yet to be truly explored. Apart from the obvious defining personality traits, the series is yet to delve into the true motivations of each character.

These early episodes definitely set up the world of Toriko, establishing the culture and nature of life within a food lover’s heaven. It also depicts the vast difference in power and motivation of characters, though more could’ve been explored in regards to character development as a whole. 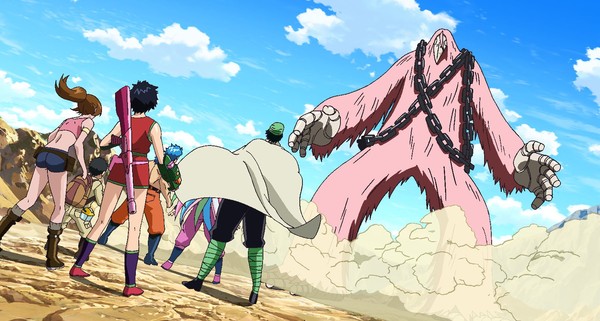 Attack of the Fifty Foot Whatever

Visuals
Toriko is vibrant. The colours presented in the series are striking, noticeable in our blue haired, orange jumpsuited hero. Each character is designed uniquely and are immediately recognisable from a distance, in no small part due to bright outfits and the noticeable differences in size between the main cast. As it is the core focus of the entire series, the food in Toriko is presented with great emphasis. Never before has animated food looked so delicious and life changing. There is a piece of meat that literally sparkles, not just for anime effect, it’s the literal power of the meat and a part of what makes it so rare. The beauty of each piece of food contrasts the beasts it generally comes from. Each creature is monstrous in both size and appearance, generally an amalgamation of two real world creatures with a little bit of anime terror thrown in. Case in point: the Regal mammoth, a titanic, tiger striped mammoth bearing dual trunks and size that rivals islands. 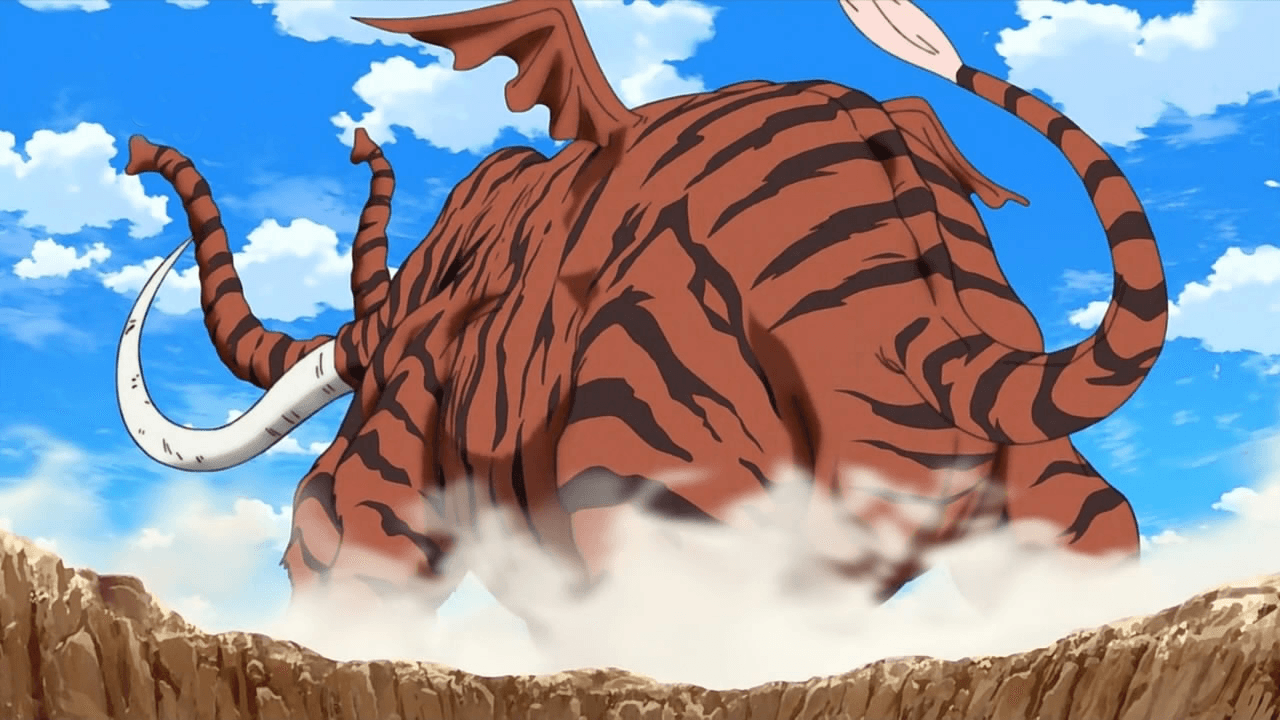 Just be happy it’s walking away

Audio
Overall the audio within the episodes of Toriko isn’t overly memorable. The soundtrack does compliment the action sequences somewhat, though it is generally fairly low in volume, adding rather than amplifying. The soundtrack in general gives of the style of similar shonen style anime, giving it a  nostalgic feel.

The opening theme song “Gatsu Gatsu!!” sums up Toriko in its entirety. It’s an upbeat, overly dramatic song about muscle, meat and mayhem. As soon as episode 1 begins, you can judge what your in for based on the intro alone. The ending theme “Satisfaction” takes a more calmed approach which, although not entirely connected to the personality of main cast, expresses the sense of the journey the series represents. 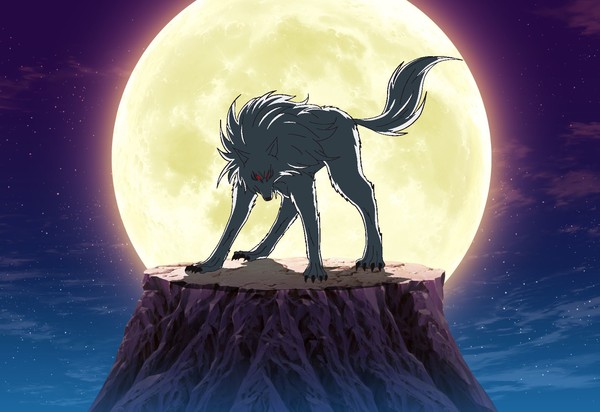 Try and make him fetch, I dare you

Extras
Toriko Collection features the usual extras you would expect to find in an anime release. There are textless versions of both “Gatsu Gatsu!!” and “Satisfaction”, trailers for numerous other anime, along with the US trailer for Toriko.

Also included in the extras is commentary for episodes 1 and 9. Commentary for episode 1 is provided by Ian Sinclair and Josh Grelle, the voices of Toriko and Komatsu respectively. The commentary is interesting in that, despite speaking little about the show itself, it delves into the real life friendship between the two voice actors and their own love of food, adding creedence to their performances in the series. Episode 9 is commentated by Ian Sinclair once more, along with Leah Clarke and Aaron Roberts, the voices of Rin and Sunny. Once again the voice actor delve into the topic of food, exploring their love of the culinary arts and the difficulty of mimicking the act of talking with a full mouth in the voice booth. 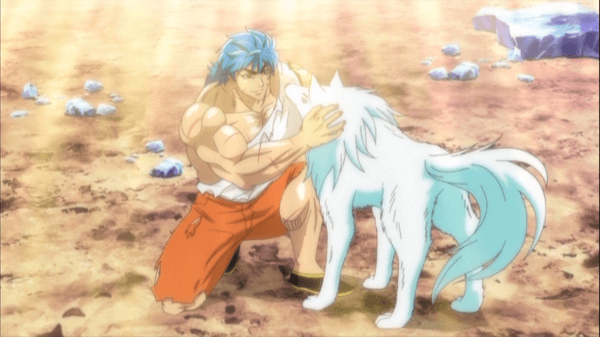 Just a Heavenly King and his Battle Wolf

Overall
Toriko is an over the top, fun filled quest for action and food. It is a true shonen series, full of over the top combat, an intensely manly protagonist and a sense of awe through a world that may or may not contain literal mountains of food. Toriko isn’t a series that will challenge your mind or bring to light any social issues, but it doesn’t need to and it isn’t meant to. Toriko is a fun, over the top series that is as simple and stupid as it is awesome. Where else would you find a series where fighters use cutlery martial arts to defeat delicious monstrosities?
“Tune in for another huge helping of fun”