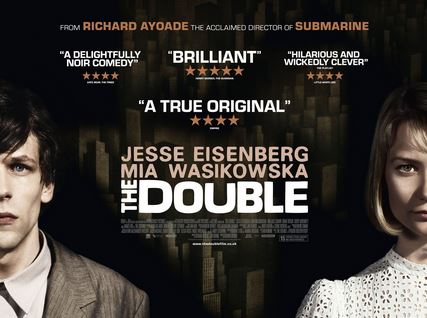 The Double is no ordinary feature film –it is a self-reflective work of art spun from a new adaptation of Fyodor Dostoyevsky’s 1846 novella. Director, Richard Ayoade, known for his role in ‘The IT Crowd’ and debut feature ‘Submarine‘, is the mastermind behind the screening. Having caused quite a stir at the 2013 Toronto International Film Festival, there is a reason why The Double will be playing at exclusive cinemas only. Could it be that the absurd nature of the film has in fact created double vision for fans? Or is everyone second guessing themselves? Read on and find out for yourself. 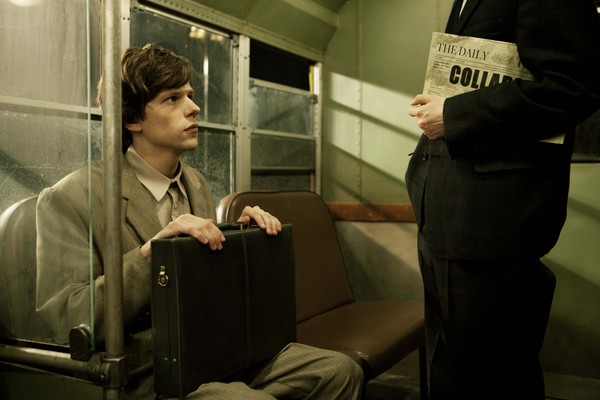 Simon James (Jesse Eisenberg) is a young office clerk tormented by his inability to be recognised as a person; existing and having a real presence in the world. The audience are introduced to Simon on the train, where he is sitting alone and resting his eyes. An unexpected disturbance by a passenger drives the story into motion. Despite there being a ridiculous amount of empty seats in the carriage, the passenger claims ownership of Simon’s place and demands he move. From the opening scene the audience acknowledges that Simon does not fit into the equation of coexistence and accepts that he cannot change by standing up.

On the other end of the carriage is Hannah (Mia Wasikowska), a beautiful colleague who epitomises everything Simon wants –yet an objective constantly out of his reach. In a desperate attempt to catch up to Hannah when the train stops, Simon accidently jams his suitcase in the closing doors of the train and unfortunately loses his belongings. Now without any official evidence of identification, Simon is deemed non-existent in the data processing factory; despite working there for seven years. Even if he had his own ID card stamped to his forehead, that wouldn’t change the blatant ignorance Simon endures from his boss (Wallace Shawn), co-workers and the security guard. 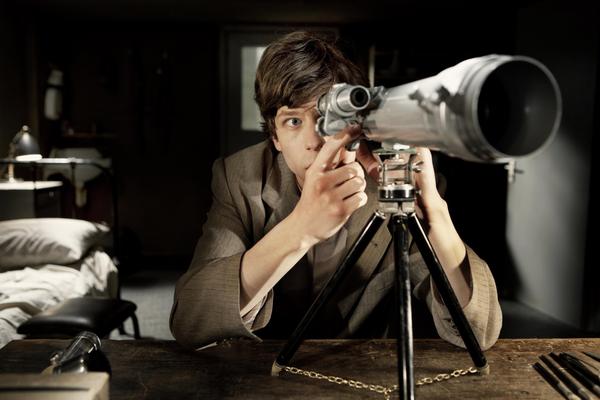 A pivotal element of the story is portrayed through the telescope lens in Simon’s apartment that leads to Hannah’s bedroom. Simon’s insignificant world changes completely when he is caught spying on Hannah by a man on the ledge of the building opposite his. The man waves before jumping to his death. The unsettling and ‘random’ suicide affects both Hannah and Simon differently; oddly enough they form a closer bond.

For Simon James, the burden of being lost, lonely and the incapable of showing his ideal self, manifests into a perfect duplicate. Enter James Simon (Jesse Eisenberg); new employee at the data processing factory who is a physical copy of Simon. Regardless of their uncanny resemblance, James exudes with an aura of confidence and charm that draws the attention of every colleague in the workplace and diminishes every aspect of Simon. 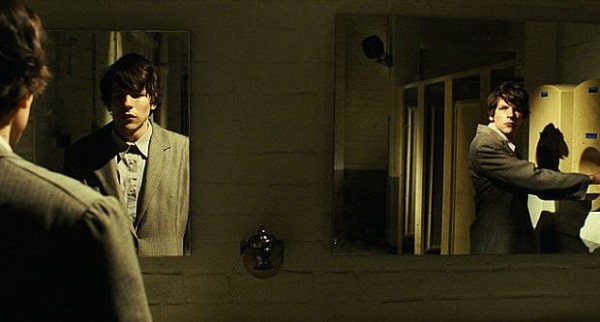 What drives the story forward is the dry humour that arises from this bizarre and complicated situation. Just imagine what you would do if you met your doppelganger? After the initial shock of meeting his physical double, Simon and James become acquainted at work and develop a “strategic” alliance to benefit them both (more so the new employee). The prime example is when James offers to help Simon win over the woman of his desires.

Needless to say, James takes advantage of Simon’s vulnerability by stealing Hannah and living the life that Simon has always dreamed of. Suffice to say; James has a way with getting what he wants (even scrambled eggs and bacon for dinner at a café) because he is a man with an unprecedented skill in manipulation and trickery. The double cross becomes both an excruciating nightmare and awakening for Simon to change who he is. With that in mind, the ending will leave the audience in either a stupor of wonder or admiration for the brilliantly portrayed story. 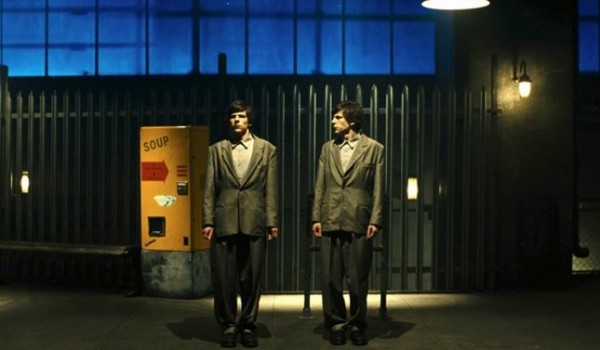 Cinematographer, Erik Wilson captures a riveting double vision of the protagonist and antagonist, in a nondescript universe of conformists known as “people”. The institutionalised depiction of the 80’s data processing systems suits the oddly disturbing work atmosphere of blank copies. To highlight the mirroring effect and significance of “the double” are the matching grey suits worn by Simon and James throughout the film. Erik Wilson uses sporadic lighting and shadows to frame the state of uncertainty and rising tension that Simon is experiencing. A great example is shown in the elevator scenes, where flashing lights are used to signal that Simon is incapable of operating the lift properly. I found it funny to see James fix the elevator with a simple kick of the door, which backfired horribly for Simon the first time he tried that.

Bafta nominated composer, Andrew Hewitt gives the audience a magnificent theatrical composition that resonates beyond the screen. Andrew’s ensemble orchestra for The Double have created a truly sublime and powerful score, with sharp violins and thunderous drums that climb through the walls of suspense and delve into the devious mystery between Simon and James. The prominent clicking and clacking of type writers within the film is fabulous and plays a significant role in establishing Simon’s unspoken mindset and suspenseful atmosphere. During the date scene in The Double, the loud music and beverage blender is cleverly combined to prevent Simon from hearing James woo Hannah into kissing him. 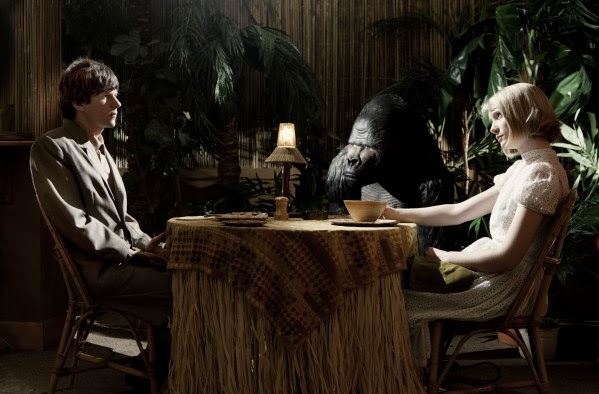 The Double is an absolutely mind-blowing film that is bold, dark, clever and interesting on all accounts. The film strives to offer the audience the true meaning of being a unique individual and having the ability to control their own life by accepting themselves for who they are. With a film that is open to endless interpretations, there is bound to be differing opinions and varying ratings. I believe that Fyodor Dostoyevsky would be proud of Richard Ayoade’s witty adaptation of his parable. Of course, The Double would not be as brilliant without Jesse Eisenberg; who deserves an award for his amazing performance as both the shy and lonely, Simon and confident and conniving, James. Don’t miss out on the experience to see the doppelganger in yourselves and watch Richard Ayoade’s spectacular film.