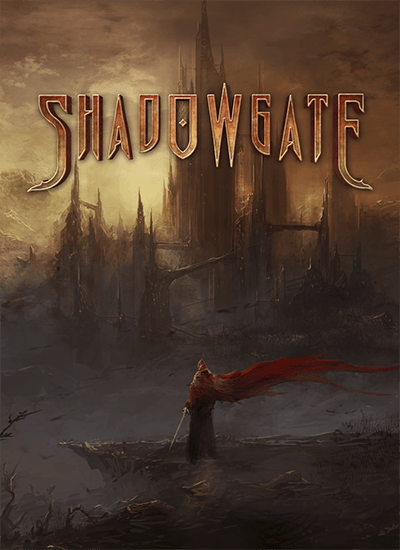 Shadowgate was first launched in 1987 for Mac computers. The game and its sequels eventually found itself on the who’s who of retro platforms, ranging from DOS to the Game Boy Color. 27 years after Shadowgate was first released, the point and click adventure game returns to Mac and Windows in a reboot made by Zojoi, with funding raised through Kickstarter. Zojoi is led by Dave Marsh and Karl Roelofs, the two original creators of Shadowgate.

The player is a simple soldier who has been tasked to defeat The Warlock Lord. Formerly known as Talimar, The Warlock Lord was once a member of the Circle of Twelve, but has fallen from grace due to his lust for power. Lakmir, the last surviving member of the Circle of Twelve has hatched a plan to stop Talimar before he can find the great power that lies within the living Castle Shadowgate. 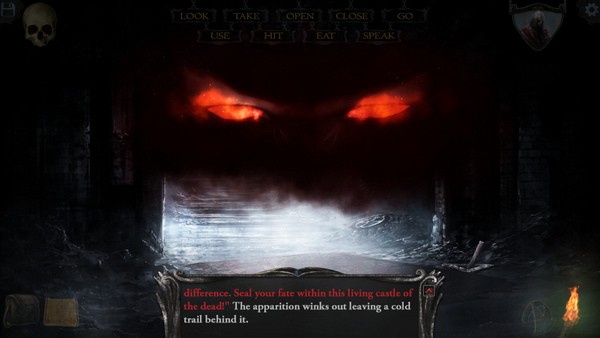 The plot is told through cut scenes and conversations throughout the game. The lore is further fleshed out with writings found scattered through the grounds of Castle Shadowgate. I enjoyed the writing in Shadowgate, finding the plot to be a solid backdrop for the game. The weakest part of the writing is Yorick the talking skull, who serves as your guide and source of gameplay hints. I found he ranges from irritating to mildly amusing.

Shadowgate started as a point and click adventure and the reboot is true to the original, for better or for worse. The player moves from room to room, interacting with a variety of objects. Puzzles block progression from one area to the other. Shadowgate is merciless with its players, as there are plenty of ways to die. Death comes from making poor decisions when solving puzzles or just lingering around too much. The hero relies on keeping a lit torch to explore the depths of Castle Shadowgate, but running out will spell a humiliating death. Turns used is how Shadowgate calculates time, with every action except “LOOK” counting as a single turn. Each torch is capable of lasting a certain number of turns before they eventually burn themselves out, forcing players to complete the game before the limited torches run out. 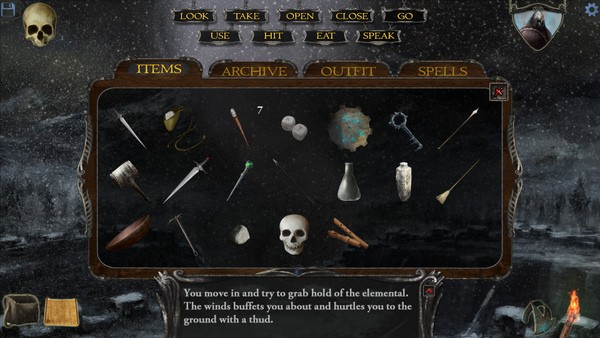 The UI remains unchanged for the most part from the original 1987 game. Several commands line the top of the screen. Actions are completed by choosing an object in the scenery, clicking the appropriate command, then clicking the object the player wishes to interact. Unfortunately, this is a really clunky way to interact with the game. The hotkeys quickly became my preferred method of interaction, as it sped things up considerably. Personally, I find the default hot key selection to be atrocious. Each key is bound to the first letter of the action it is associated with. This ends up scattering all the hot keys across the keyboard. Mixed with the custom hotkeys that allows players to access any item with a number key, the default key bindings were practically impossible to use without looking at the keyboard.

For users who prefer the mouse, Zojoi did make some small additions to try to streamline the controls. It is possible to double click an action to lock it in place, making all future interactions with objects to automatically use the locked action. Unfortunately, no amount of hot keys or tweaks can stop the fact using inventory items on the environment is unwieldy. The inventory windows covers almost the entire screen. Players must first click the item they want to use in the inventory, then trigger the command, then close the inventory and click the object they want to interact with. 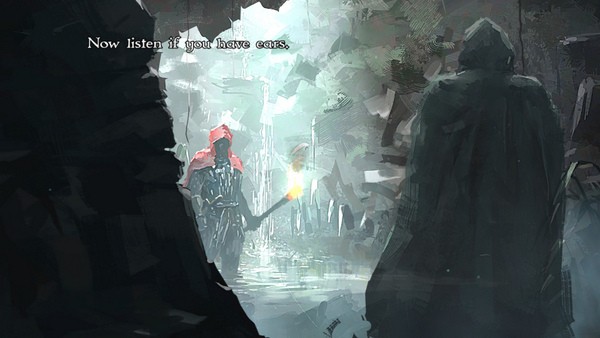 The difficulty scaling in Shadowgate is very good. Puzzles follow a good logical flow and are significantly easier at lower difficulties, but are changed enough that the more difficult version still provides a good challenge. Starting the game from the beginning due to running out of torches or poor turn management is initially a bitter pill to swallow, but I soon found myself figuring out ways to shave turns off my runs. I suspect Shadowgate speed runs may soon become a popular hobby among fans. 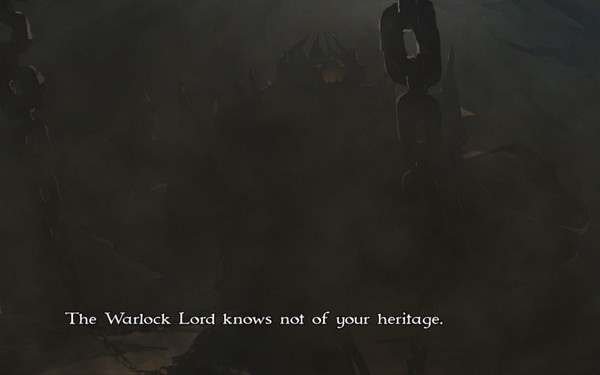 Part of Shadowgate’s makeover involves brand new illustrations for the entire game. The backgrounds are absolutely stunning and fall into a more traditional fantasy art style. The cutscenes on the other hand have a more wispy and ethereal look to them, which provides a nice artistic flair. The UI manages to feel oh so retro without falling into a pixelated 8-bit look. For the nostalgic, Zojoi has added retro-styled transitions and text that hark back to the NES era.

Shadowgate’s soundtrack has also seen an update. The game has a orchestral score. The soundtrack is very enjoyable to listen to, complete with an epic fantasy score that would make RPG fans feel at home. Zojoi also gave the soundtrack the retro treatment, allowing the orchestra score to be replaced with a retro chiptune soundtrack in the options.

Although the game’s sound effects are solid, they are most definitely eclipsed by the soundtrack. The voice acting is probably the weakest link in the audio chain. Though the main characters’ voice acting is superb, the performance of minor characters struggled. 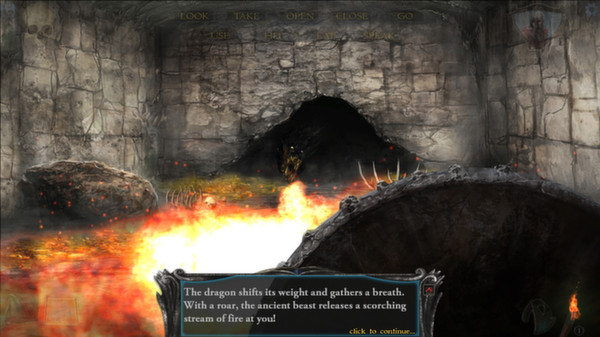 Shadowgate isn’t for everyone. The game returns the genre to a more challenging territory, a stark and brutal contrast to the more common casual-friendly difficulty level of most adventure games today. Nostalgic fans will be thrilled that the game’s UI has also stuck to its roots, though its clunky handling is showing its age. Zojoi has done a fantastic job in the audio/visual makeover, with a stellar soundtrack and gorgeous illustrations. Shadowgate is packed with replayability thanks to its three levels of difficulty. For those wishing to test their puzzle solving skills or looking to relive the glory days of adventure gaming, Shadowgate is a challenge worth embarking.