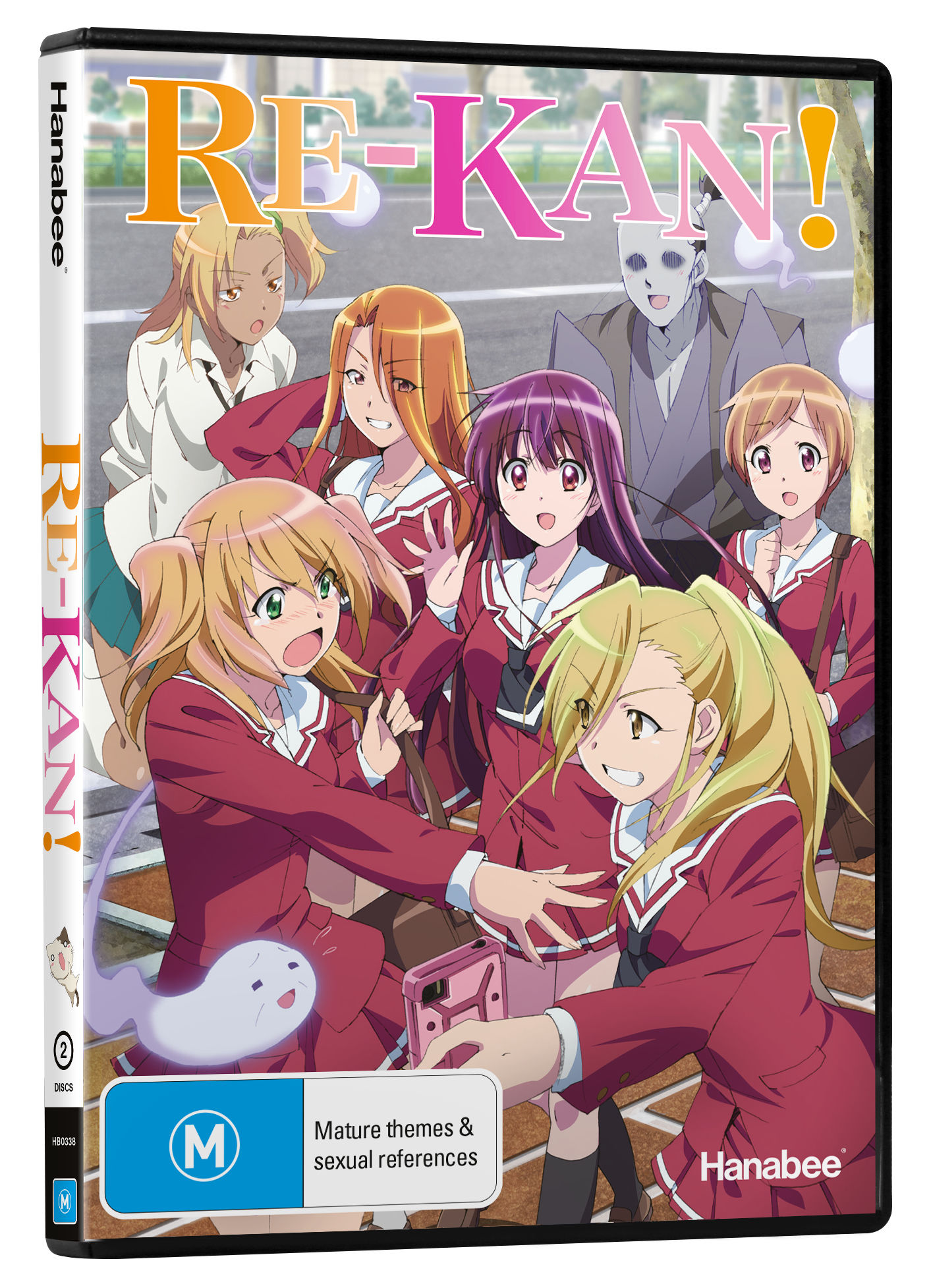 Hibiki Amami is a high school student with a sixth sense. She inherited the ability to see and interact with ghosts from her late mother. Most of her friends are ghosts as a result, but she eventually finds herself in the middle of a group of lively classmates. These friends include: Inoue, who is scared of ghosts, Esumi, who used to be a ‘delinquent’ and still acts tough, Uehara the blogger, Ogawa the air-headed zombie fanatic and Yamada the egotistical boy. Hibiki’s ghost friends are compassionate towards her and actively help her out every day, and she does her best to make them at peace with their past lives and their present situations. 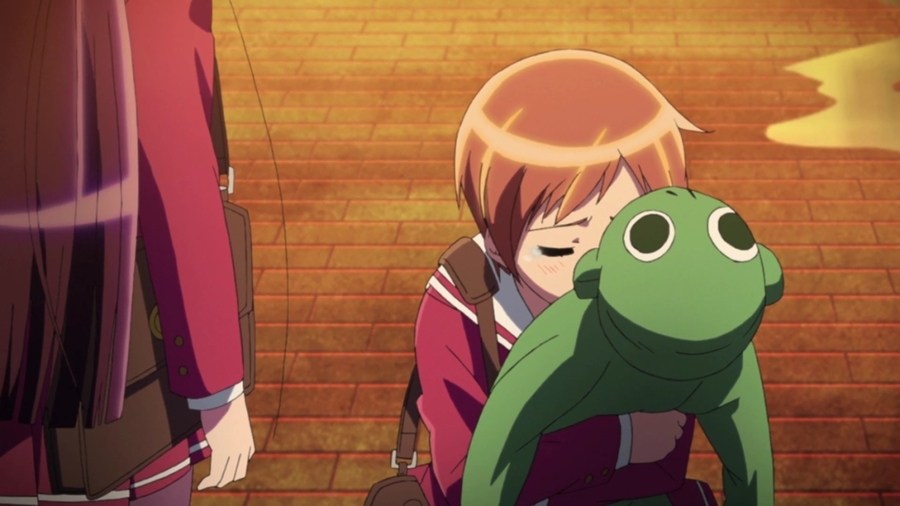 If the anime adaptation of Re-Kan! was produced for a reason other than to help sell copies of the original manga series of the same name, it was to provide the sort of uplifting entertainment occasionally found in the genre of moe slice-of-life anime. If one positive thing can be said about this series, it is that that goal is achieved, albeit in an unoriginal way. Each and every episode is almost entirely predictable right down to what lame jokes are going to be made and when, but many episodes effectively demonstrate the possibility that ghosts might just want to do one last nice thing for a relative before moving on, as opposed to wanting to get revenge on a murderer or haunt others. Hibiki helps them realise their wishes, and everyone moves on. Unfortunately, each resolution can be seen coming from a mile away and loses most or all of its impact as a result, so it would be misleading to say the resolutions are going to be emotional for the viewer. Whether or not the attempts at emotional engagement will work on you depends on how familiar you are with modern anime tropes.

If the above description of each of the human characters seems one-dimensional, it is because the characters seriously do all have just one trait, maybe two at best. They are generally supposed to be kind at heart, but they come across as poorly designed facsimiles of humans with no real personalities. Once a character has been introduced, they do not develop at all. There are flashbacks for some of the characters, but each and every one of them feels like a matter-of-fact explanation or a futile attempt at being funny rather than an attempt at character development. It seems that the original author read a manual on how to write a generic moe series instead of going to the effort of interacting with real human beings and subsequently portraying their behaviour based on real observations. Anime is fundamentally unrealistic, but diverging too much from reality in a work of fiction in this way makes it impossible to relate to any aspect of it. 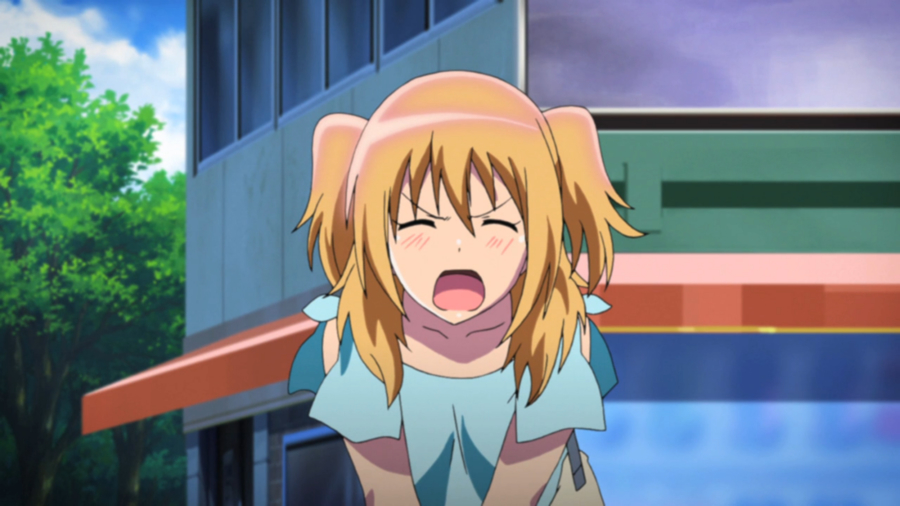 There are a few annoying characters in Re-Kan!, but none so much so as Inoue. Being scared of the concept of ghosts, or even the real ghosts that happen to be around her everyday, is not worth labelling as unreasonable. What is unreasonable is this being one of just two character ‘traits’ she has, the other being that she is an archetypal tsundere. She is even called a tsundere, which is not a new joke or a funny one at that. She is the least human-like character in a series about a person who can see ghosts and understand the words of a perverted cat. Said cat constantly jokes about looking at girls’ underwear, but the ‘jokes’ are not funny in the slightest, nor are they funny after being reused over a dozen times. Neither is Inoue, who is constantly complaining about everything in public and getting upset every time she acknowledges that she wants to be nice to Hibiki. It does not seem like any of the students study or do homework, and it often seems as if shopping and cooking are about the only things these characters are capable of doing, aside from complaining and helping ghosts. The ghosts, fortunately, are not particularly annoying; they are somewhat sweet and give this series a desperately needed sense of lightheartedness and positivity.

The animation is basic, but the character designs do stand out. Unfortunately, they do not stand out in a good way. Hibiki’s defining visual feature is her purple hair, which glows significantly more than is realistic for some unknown reason. It looks as if it is perpetually covered in some kind of transparent substance, although it is hard to imagine that the character designer for this anime adaptation wanted her to look like a greaser in a Japanese school uniform. Inoue’s hair has an inexplicable faint purple glow as well. Esumi has red hair, which is only worth mentioning because that apparently designates her as a violent character who gets angry at everything. Esumi and Uehara both have hair covering their one of their eyes, but those eyes are visible through the hair anyway. Looking at their hair is the easiest way to identify each character, except for the ghosts. The ghosts that are not bland silvery blobs or invisible are easily identifiable. No fan-service is present, which is one good thing this series has going for it, but there is frequent slapstick violence. 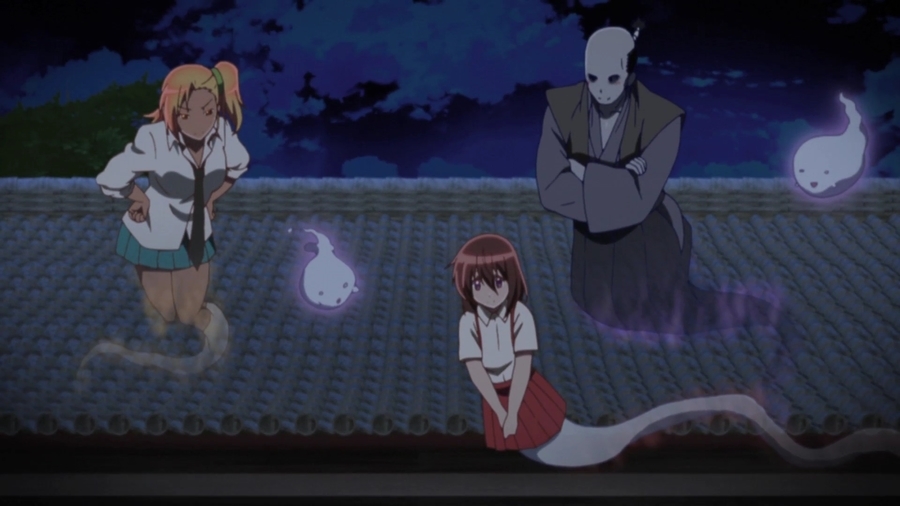 The voices are what you might expect from a recent moe anime. That is to say, they are shrill. Typical one-season anime adaptations essentially feature the same types of voices every time, but it is getting to the point where it is simply impossible to suspend even the slightest bit of disbelief in order to accept that Japanese girls actually sound anything like they do in Re-Kan!. An English dub may have actually improved this series. There is background music, but it is not noteworthy. The opening song is surprisingly decent, but the ending song is just another example of a forgettable pop song that does not need to exist. The subtitles are generally fine, but even a basic understanding of Japanese will often render them pointless due to the large amount of overly-simplistic dialogue used. Sentai Filmworks’ subtitles do include some useful translation notes, however.

The textless opening and ending animation sequences are included on the second disc. Trailers for some of Hanabee’s other recent releases are also included on that disc. 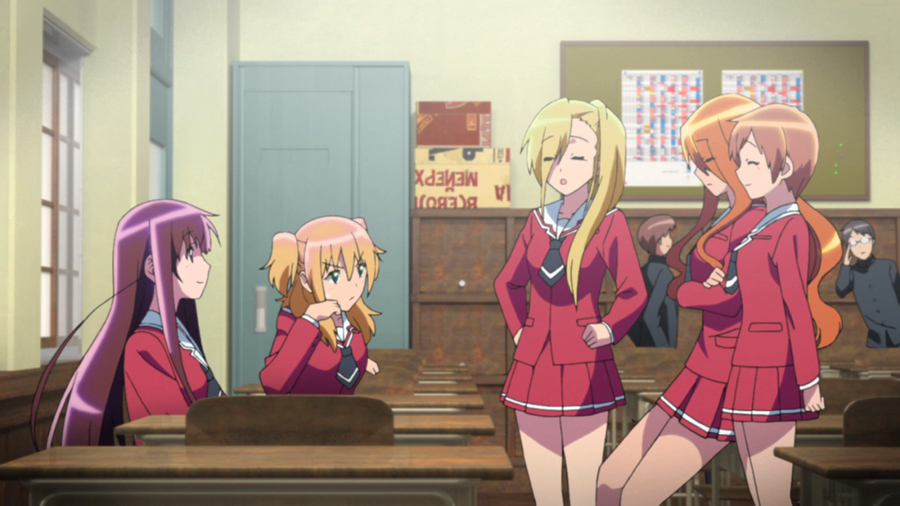 Moe should have disappeared from the world after Lucky Star, but it did not. If you or someone you know is new to anime, you might find Re-Kan! to be a sweet and touching story about a young person who dedicates most of her time to helping ghosts. The attempts at comedy fall flat, although it cannot be stated the production team did not follow the unwritten how-to guide for simple moe series to the letter. Had there been an attempt to depict Inoue genuinely growing as a character, or an attempt to depict realistic characters at all, it could have decent.

It is extremely contrived, but you may find this to be a somewhat emotionally engaging series if you can look past that.
6