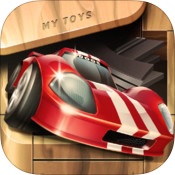 One of my fondest childhood memories is playing with a scalextric kit with my dad, shooting miniature model cars around a dusty old track until they eventually lost grip and went shooting across the room. The problem that scalextric had was that once you’d flung the cars off the track at your family and left enough of them with permanent scars and a morbid fear of F1 cars, the novelty wore off pretty quickly. Rail Racing addresses all of these problems and makes racing model cars on rails more fun for you and less physically and mentally scarring for your friends and family around you. 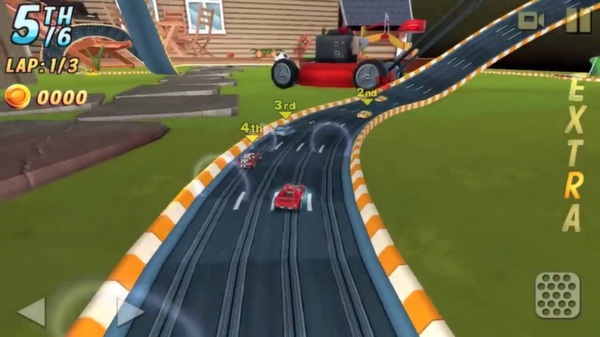 Unexpectedly, I actually had a very fun time with this game. It throws you into a world of awesome race environments and pits you up against 5 computer-controlled racers in a style that feels akin to runner style games, but with enough complexity to set it apart from the cookie cutter formula so common within that genre. You are only given two inputs: an accelerator pedal, and a set of directional buttons that allow you to swap rails. But only by hitting speed boosters, slowing down into corners, and tackling your opponents will you be able to assure success in this genuinely very challenging game. I thought sometimes that the only reason that I won was pure luck and button mashing, but for completionists who want to collect every star and unlock every car, they’re going to have to put in a lot of time to get the necessary in-game currency. Especially if you want to customise your cars, and trust me you will, in which case you often need several times the value of the actual car to do so. 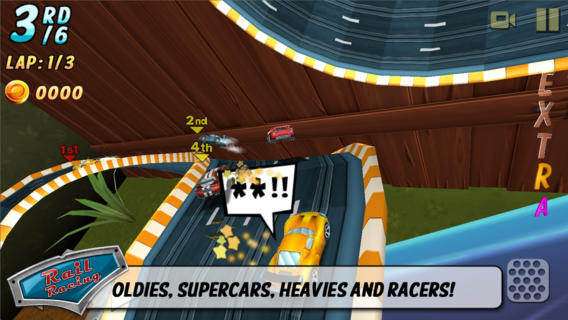 What I loved about this game was its accessibility and how easy it is to pick up and play. Each race only takes around a minute or two so you never feel bogged down if you lose a race and have to try it again. For someone like me who primarily uses mobile games as toilet gaming or something to play on public transport, this game was a great alternative to the tedium of trying to 100% Angry Birds.

Rail Racing went far beyond my expectations in terms of its aesthetic. It definitely doesn’t do anything groundbreaking or original, but it uses a cute concept that I haven’t seen since Hot Wheels on the SEGA Megadrive, whereby each course is literally an elaborate scalextric track set up in various places around the house and themed as such. It achieves a decent framerate that keeps up with the speed of the races and all the time that the game isn’t crashing due to its integration of Game Centre for the multiplayer, the game looks really quite good. The cars for each stage differ so you can eventually get access to a massive variety of adorable model cars that aren’t too hideously hard to unlock and serve as a satisfying payoff as you progress through each stage. I’m not entirely sure why the kid’s bedroom stage had a big cardboard cutout of Dolan in the middle of the track, but I’ll let them off for including such an irritating meme since everything else in the course was so charming. 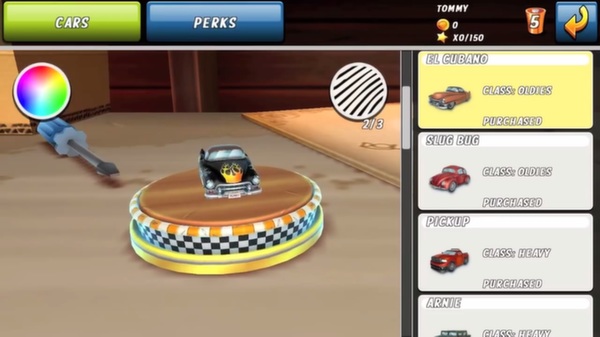 Music was not this game’s strong point. Each stage has its own unique track and if you can survive through the first stage’s awful, unfitting background music then you are a better man than I. I actually turned the sound off on my iPhone after race 2 until I got to the garage stage at which point the music picked up. From then on the music is still not hugely appropriate for a racing game, but it is at least okay background noise. The rest of the audio assets suffer from the same problem and I feel like a bit more attention to sound design would serve this game well, but nothing is so awful that you wouldn’t play the game because of it. 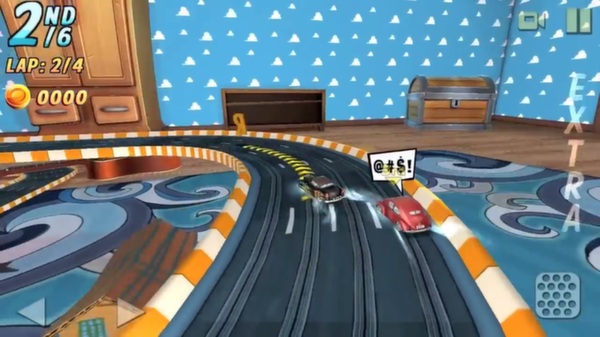 Going into this game, I did not expect a lot since I am not a fan of runners or racing games for the most part. However, Rail Racing went above and beyond my expectations, showcasing a casual game that is easy enough to be enjoyed by anyone, but has enough complexity to make the competitive among you want to complete absolutely everything and even want to dive into the multiplayer scene and show off your precision timing and skill which I certainly lacked. To summarise, Rail Racing is an excellent pick-up and play racer that is as fun and challenging as it is charming.