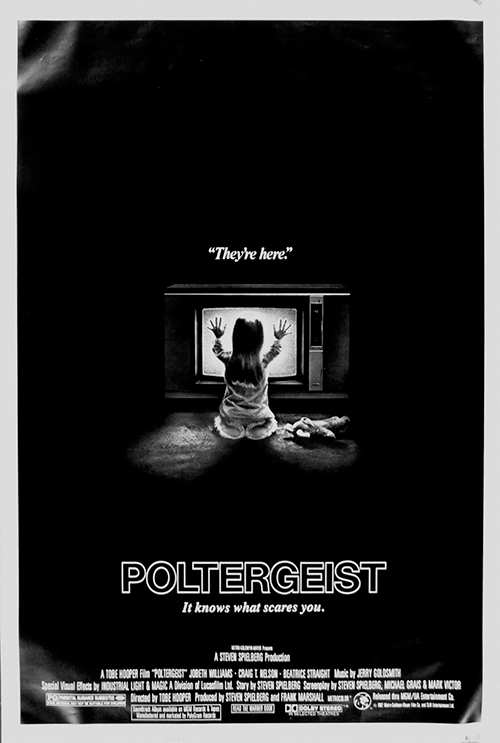 If you’ve been reading me for any length of time, you’ll know that I am not a horror fan. I will honestly say, up front, that I have not enjoyed being scared by horror films. It’s essentially created a feedback loop whereby I don’t watch horror movies because I get scared and I get more easily scared by horror movies because I don’t watch them; truly the catch-22 of the film reviewer’s art. I, nonetheless, braced myself for the horrors I would face as I walked on down to George Street cinemas for their In the House Halloween double feature (which also featured Army of Darkness after this screening).

Our MCs for the evening were Jason ‘Jabba’ Davis and Anthony Kieran who opened the evening by discussing films with audience and giving a long time supporter who had been to every In the House screening (save one) some free jetboating tickets. Although things were a bit shakey at first, once the crowd got warmed up a bit and realised they didn’t have to take the evening too seriously, this part of the evening got better. These good vibes flowed on to when the two MCs sat down for a discussion of the film’s trivia. In particular, Jabba highlighted the film’s production controversy regarding Spielberg’s involvement in producing it and whether his hands-on approach was a usurpation of Tobe Hooper’s role as a director. 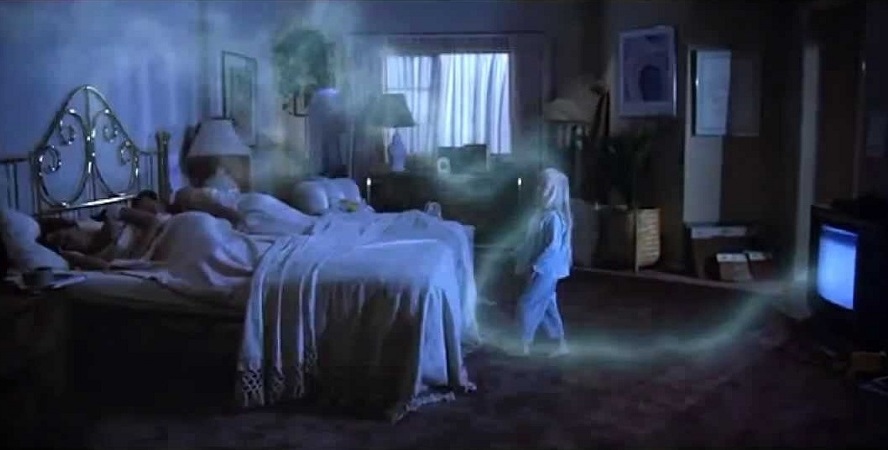 The film’s story follows the Freelings, a suburban American family leading an almost idyllic life in a newly constructed planned community out in Orange County California. The youngest daughter of the family, Carol Anne (Heather O’Rourke), wakes up in the middle of the night, while the rest of the family sleeps, and begins conversing with the television set which is broadcasting static which causes some concern to her parents. The same thing happens the following night but this time we see a ghostly hand reach out from the TV screen and invade the house. The supernatural action mounts from there as this new visitor to the house becomes more aggressive and malevolent as time marches on. 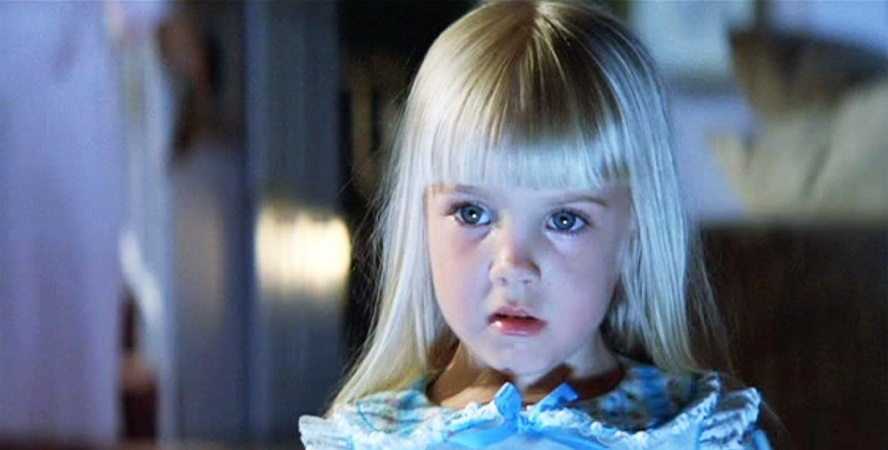 The narrative is actually very straightforward in following the trials and tribulations of a typical American suburban family as they attempt to deal with supernatural visitors. The progression in the menace of the spirits grows slowly over time and the family react accordingly; first with surprise and glee which then turns to fear. There are no ulterior motives among the main cast and they’re all earnestly trying to work together to learn about and find a way to combat these antagonistic entities. The film occasionally drags with it’s exposition regarding the nature of these beings but more often than not, we learn about them at the same time the family does: through watching the action unfold. The final twist at the film’s climax was wonderfully built up to and anyone with a keen eye will have a reasonable chance to put the pieces together.

The performances from the cast are thoroughly solid even when the action goes to extreme and extraordinary plot beats. The parents (Craig T. Nelson and JoBeth Williams) do an especially good turn as the exasperated adults trying to deal with the sudden intrusion of the supernatural into their lives. O’Rourke does similarly well with her performance which is at once both cute and creepy in equal measure. The standout performance came with Zelda Rubinstein’s psychic who played her character who is at once eccentric but also comforting; strange but dignified. It’s through these performances that the film is able to ground itself even as things take increasing turns towards the surreal. 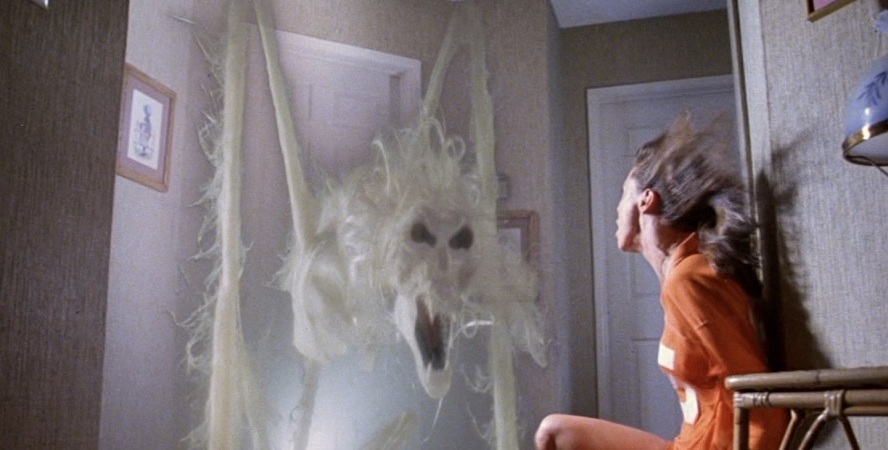 Despite the fact that it’s been decades since the film’s release, I think that the effects have largely held up. Despite the fact that it’s fairly clear to me that they’re fake, I was still impressed by their visual design which was still evocative and unique. Most importantly, the effects still had the capacity to scare me. The practical effects in particular have held up the best while the CGI has not fared as well. Luckily, the aging effects do not break the suspension of disbelief and they still have a unique visual design to them which I feel gives these spectral beings a bit more cinematic staying power. 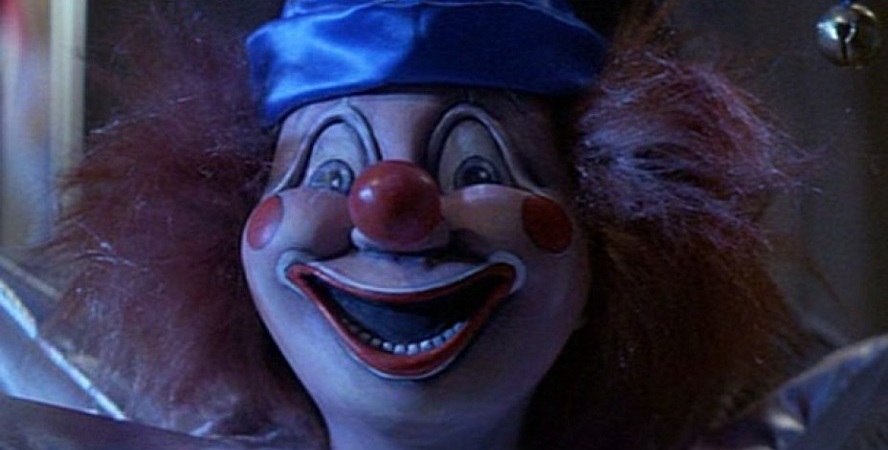 The audio design which most stood out for me in this film was the way the orchestral soundtrack incorporated sound effects to create a sense of dread. Horror movies are notorious for their reliance on their soundtracks to frighten the audience as screeching violins are essentially the cinematic equivalent of a “boo!”. Jerry Goldsmith’s composition does an excellent job with his score which nicely complements the film’s narrative action as it progresses. There is a lovely juxtaposition between the softer melodies associated with the humdrum family life and the atonal blasts given to the supernatural beings. It’s a primer on how good Hollywood soundtracks can be in the hands of a master composer. 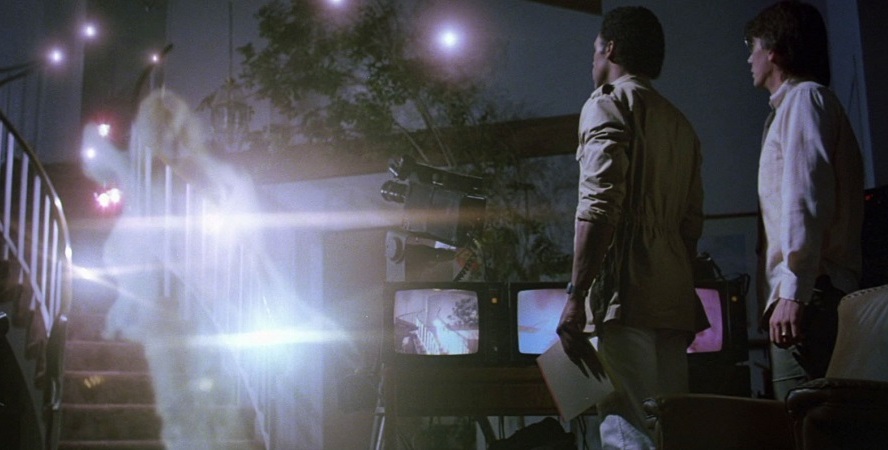 I found a lot to like in Poltergeist and I have no trouble recommending it to anyone with an interest in horror or the works of Spielberg. It features a simply but effective storyline alongside solid performances by the cast. The film’s special effects largely stand the test of time and still have the capacity to scare you. The film’s orchestral score is similarly expertly composed to both punctuate the story’s emotional arcs as well as to unsettle its audience. It’s a thoroughly enjoyable film and I’m glad I was able to see it on the big screen.

I have to admit, I am slowly being won over to horror movies thanks to these In the House screenings and I look forward to next year’s Halloween double feature with glee. Kudos to the good folks at In the House!

Poultergeist is a horror classic which stands the test of time thanks to it's excellent practical effects to still scare modern audiences today.
9