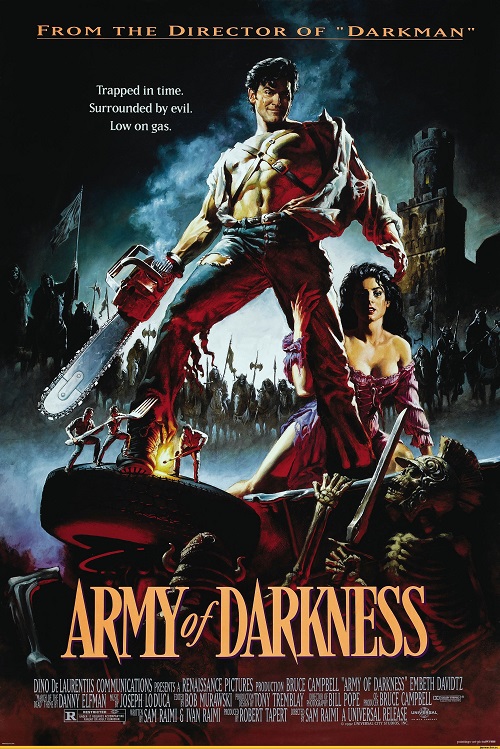 After the spookfest that was Poltergeist, I was glad to settle in and watch the final entry in the original Evil Dead series; Army of Darkness. I’d seen Army of Darkness previously and looked forward to returning to the camp fun of Evil Dead. I’d previously watched Evil Dead 2 at the last In the House Halloween double feature and enjoyed my time immensely. 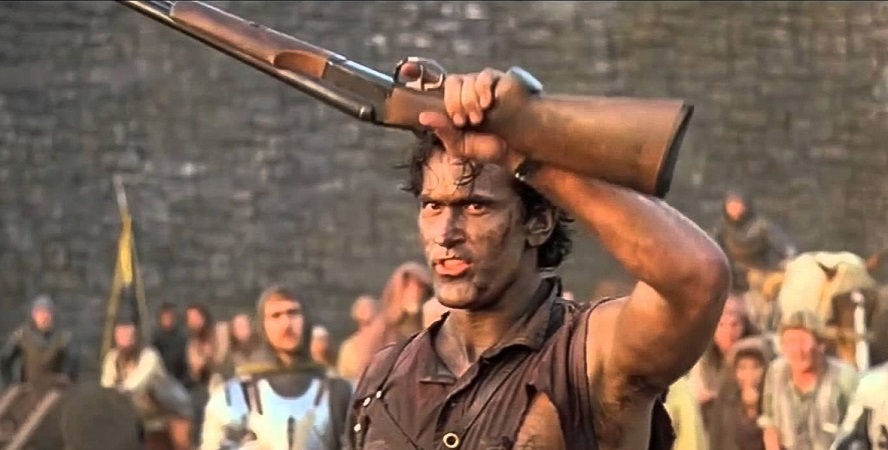 Our story picks up where Evil Dead 2 left off with Ash (Bruce Campbell) being sucked into the portal at the end of the previous film and into the past. He winds up somewhere in the middle ages and is immediately captured by the locals as a suspected enemy agent despite their wizard saying he might be the one prophesied to defeat the deadites. After proving he’s tougher than he appears (by killing a couple of deadites), Ash is sent on a quest to retrieve the Necronomicon. In his proven style, Ash tries to pick up the book while fudging saying the magic words needed to safely do, which unleashes the eponymous army of darkness. It’s now up to Ash to clean up the mess he’s caused, save the day and find a way back to his time. 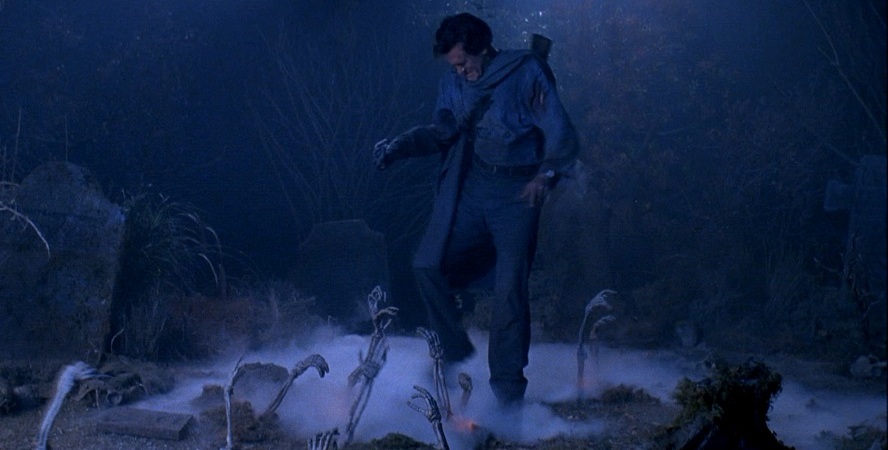 The main strength of this film is found in two places: slapstick and anachronistic juxtaposition. The former is a staple from the Evil Dead series which found the perfect confluence of slapstick and over-the-top gore to create a pleasant mix for a horror comedy. I’ve previously heard this particular combination called “splatterstick” and I think that it still holds water in describing this film even if the gore has been turned down. Instead, the movie exaggerates the slapstick of the violence instead to a delightfully campy extent. Ash’s battle against the deadites is takes on an almost cartoon-like quality as Campbell overaggerates every blow given and received.

This leads into the next strength this film has: comedic juxtaposition. Almost everything in the story besides Ash is played absolutely straight. The story has all the ingredients of an epic fantasy story except for the hero being a character who would normally be the comedic relief. The denizens of this generic European fantasy world are in absolute dire straits due to the evil of the deadite threat and look to Ash to be their time-traveling saviour; instead they get a wise-cracking sidekick comic relief who is doing his best to look after himself and himself only. This miss match between the tone of Ash’s character and the rest of the film gives us most of the comedy we see and to great effect. There’s nothing like having a character respond to faux-Shakespearean monologue with an 80s action movie one-liner to make you laugh. 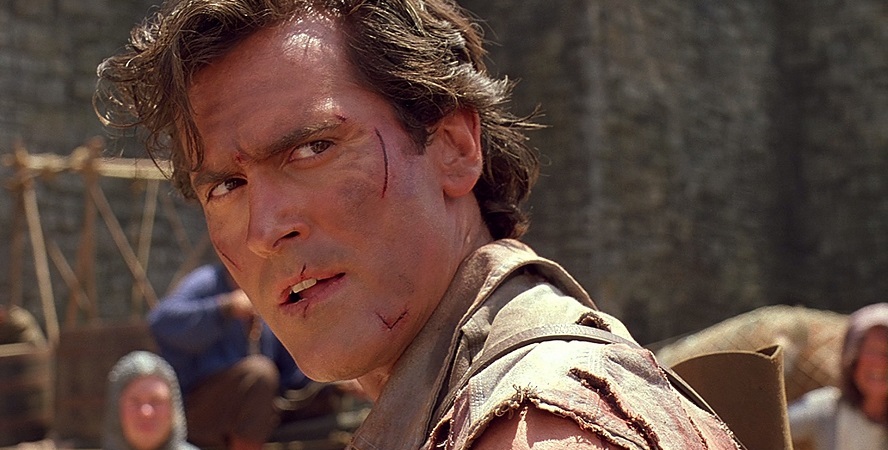 All of this works because Campbell is able to play his character with just the right amount of arrogant bluster mixed with pratfall. He’s been the main draw of this entire series and it’s easy to see why; his performance is bloody hilarious (occasionally literally). His performance brings the character to life and makes him compelling to watch even if he does come across as a bit one- note over the course of the film. After 2 films of fighting the deadites, Ash isn’t going to experience any character growth and you shouldn’t expect him to. Instead, you’ll be treated to a film’s worth of hammy one-liners worthy of any and every schlocky action movie.

Although most of this film finds itself still hitting the comedy notes fairly regularly despite the decades since it’s release, there is still some cringe factor to be had; mainly regarding it’s female representation. This is mainly found in the film’s relationship with the romantic interest of Ash. At the film’s midpoint, she gets kidnapped and possessed by the deadites largely in order to give Ash a motivation to help the villagers fight off the eponymous army of darkness. The way the film depicts her (and other female prisoner’s) captivity just feels like really on-the-nose pandering to the male gaze. It’s not a major point of the movie and doesn’t appear to have been there for anything more than a second or two of sleazy titillation but for any of you who may be upset by such content; it would be negligence on my part to not bring this up here before you go see the film… especially since I’ve spoken so highly about everything else. 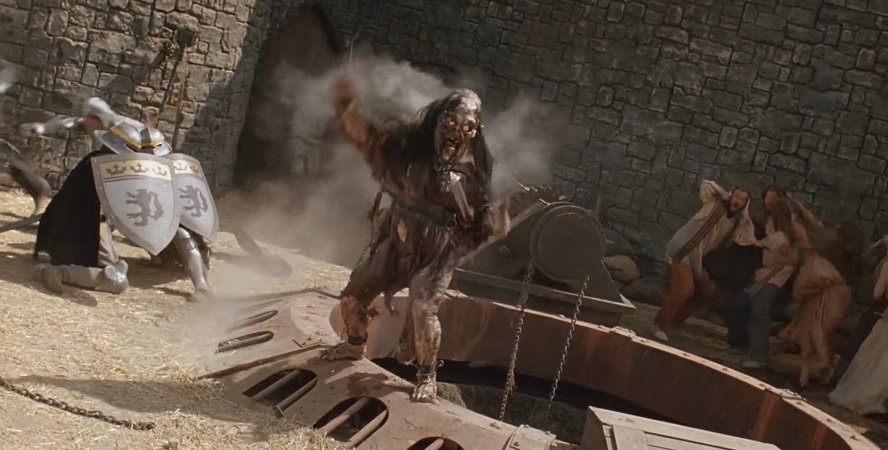 The visual effects of this film are a bit hit and miss at times. The practical effects for the army of the dead in particular in this film have not aged well over the years… although to be fair, I don’t think they were ever that crash hot to begin with. I’d argue that noticeably fake skeletons and zombies add to the film’s ham factor rather than work against it so I actually consider it to be a point in it’s favour. There are some body horror effects which are still pretty cool though so I’m inclined to believe that the aforementioned lacklustre practical effects were a deliberate decision to conform with the film’s wider, sillier, tonal concerns.

I wasn’t particular impressed by the film’s score and it didn’t leave much of an impression on me either way. It’s an orchestral score and it does the job of punctuating story’s emotional arcs but I doubt you’d be able to recognise it outside of the film. It didn’t stand out to me as bad either, it’s just not particularly memorable. 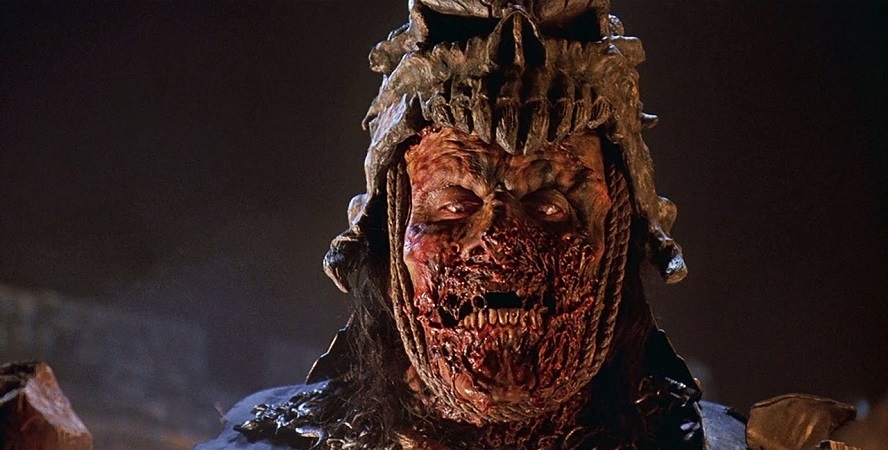 I very much enjoyed my time watching Army of Darkness and was glad to see it up on the big screen. The story and performances were delightfully hammy with the film comfortably resting on the performance of Bruce Campbell’s Ash. The visuals may not have aged the best in the interim but still work to the film’s credit to making a contribution to the film’s overall ham factor. My one quibbles were with a very short scene which felt like pandering to the male gaze and a lacklustre soundtrack. Besides those concerns I’ve already mentioned, I have no trouble recommending Army of Darkness to anyone who might be interested.

Army of Darkness is a fun and campy action comedy film which is a pretty great despite some cringey flaws.
8.5