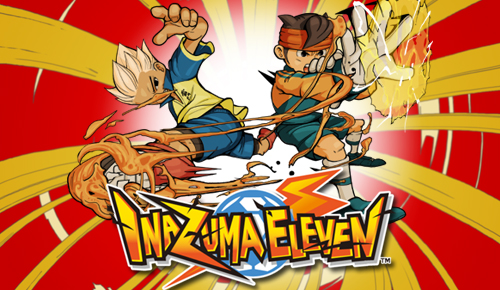 Overview
Larger than life and out of this world, Inazuma Eleven has at long last gotten into position and is ready to kickoff with a bang in the West. Touched up and given a new coat of paint for the 3DS, Inazuma Eleven is ready to roll on the eShop and it packs quite a kick. It is been quite the wait for this game and at long last its time to hit the field. This soccer RPG does nothing but impress with its brilliant gameplay and unforgettable story. What more can say? In the famous words of Mark Evans: “Let’s Play Soccer!” 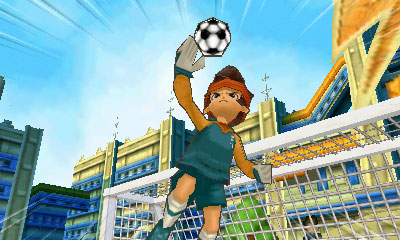 Story
In dire straits the Raimon Junior High Soccer Club is already one foot in the grave. The higher ups at Raimon plan to disband the club unless they can prove themselves as a real soccer team. The only problem for this band of goofballs and misfits is that they don’t even have enough players to form a team.

One day an open-challenge is laid down to Raimon by the best team in Japan, Royal Academy. It is an unbelievable thought that Raimon could even stand a chance against these goliaths, but with the always optimistic Mark Evans, Raimon must muster up the courage and will to turn their team’s fortunes around and revive the legendary Inazuma Eleven team and restore the reputation of this down on their luck school.

While that all seems quite simple for a soccer game’s story, it couldn’t be anything more from the truth. Underneath its simple plot is a wonderful world of super-powered moves and high stakes soccer battles (sometimes with deathly consequences). On top of all that there is conspiracies, brainwashing, the occult and the powers of god. It is about as insane as a soccer game has ever been but it makes Inazuma Eleven all the more special for it. This is something unlike anything before and thank god for that. 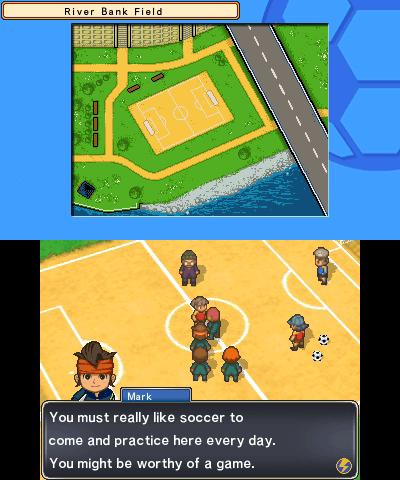 Gameplay
Where Inazuma Eleven truly shines is its innovative gameplay. There is simply nothing like Level-5’s soccer RPG. The game is equally split between two different gameplay elements: The RPG side of things and the Soccer Battles. Both of which in theory wouldn’t work well but in practice it is somehow a kind of magic really.

The RPG side of things is not unlike other RPGs fro Level-5, you build up a team (or ‘party’ in other RPGs) and level them, grow their talents and skills, teach them new special moves, etc. It works very well and to top it off there is over 1000 different players to collect to craft the perfect team. This not only adds a collecting element but also gives the player a plethora of options for play style. You can also set your team formations and game plans. There is a great deal of customization and detail to go into with this side of the game and it is really an RPG fans paradise in many ways.

Of course this part of the game features heavy amounts of story-telling and boy oh boy is it one hell of a story. You’ll be hooked in deep with this crazy story of a boy who just can’t see anything but good in the world. His love for soccer uplifts all around him, Mark Evans is one hell of a guy and its easy to get sucked into his character and journey. Throughout the course of the game you will be tasked with a variety of different missions to take on, a lot of the time they will result in a new player joining your team or something of the like.

In terms of length for the main story of the game, you are looking at anywhere between 30 and 40 hours. It is a pretty immense game and with the amount of things left to do after completing the main story you’ll have plenty of playtime here in Inazuma Eleven. 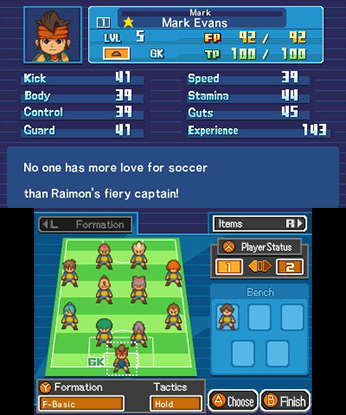 In terms of the Soccer Battles, this part of the game serves as the battle scenarios as seen in other standard RPGs, but there is a difference – you are playing soccer. There are a multitude of different soccer battles that can occur in the game, most common are the random encounter types, these will occur as you are roaming the world, you will be challenged to different types of soccer battles, this is a good way to level your characters and build certain players up. There is also the main battles, these are all story battles that are part of the ongoing story arc, they are major battles and have you pitted against an enemy team in a full length game. These are of course the highlight of the Soccer Battles.

The battles themselves are controlled entirely with touch controls, you swipe on a player to move him in a certain direction, tap in certain directions to pass or shoot. When approached by an enemy player, you will engage in a conflict, there are special moves you can get for both defending and attacking. Defending moves include special slide-tackles and of course for attacking moves this means special shots. These conflicts work on skill sets and element of the player to determine who wins an exchange. It works a real charm and makes for some strategic gameplay. 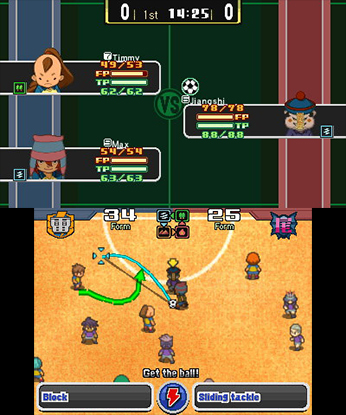 To add even more sweetness to the pot, Inazuma Eleven even has a multiplayer mode. The mode allows you to go head to head in local multiplayer against friends with the game. Unfortunately there is no online multiplayer in the game, which is somewhat of a letdown but considering it is a revamp of an original DS game, it is to be expected. Regardless of that the local multiplayer is phenomenal and highly engaging if you have a friend who is just as into this game as you are.

All in all, this is something truly fresh and innovative, Level-5 have crafted a unique RPG experience that is quite simply unprecedented. 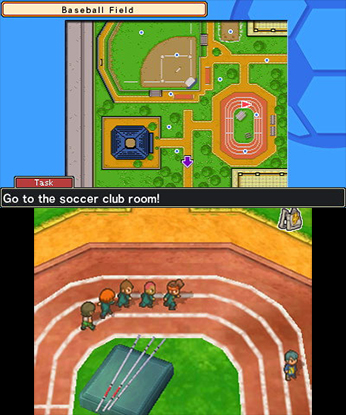 Visuals & Audio
Aesthetically Inazuma Eleven looks great. It blends 2D visuals with 3D to great effect. The sprite based graphics intertwined with the 3D sequences are a great mix and both are well designed in their own respects. The artstyle is very unique and the superb animated cut-scenes are simply mind-blowing to say the very least.

The soundtrack for the game is likewise brilliant. The unforgettable battle theme is a true standout of the litter, giving the player a real sense of excitement every time its time to hit the field. There is also the incredible main theme ‘Stand Up’ which will no doubt invade your mind and set up camp there for days after listening.

This game also features some voice acted sequences and is quite well done at that. The most memorable of which was the English voice for Mark Evans, he brings life to the character and perfectly captures his unbridled optimism. 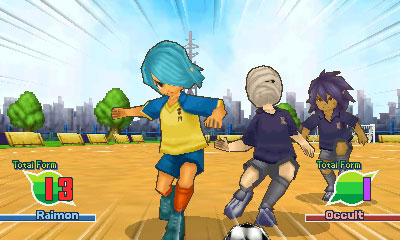 Overall
Inazuma Eleven is quite simply an unprecedented game that takes all preconceived notions of what an RPG should be and kicks a dragon at it. This is a game that in theory just shouldn’t work but somehow, someway, it does and it is incredible.

Whether you are soccer fan or not, Inazuma Eleven is one of the most unique RPG experiences in the past decade and it is more than worth the price of admission. There is something magical about the way that Level-5’s games play and that special kind of magic is on show here in Inazuma Eleven. The lights are on bright and Inazuma Eleven is a game that impresses on all fronts.

Inazuma Eleven is one of those special games that comes along every couple of years that just changes the way we perceive games entirely. This is why Level-5 are etching themselves out a name as one of the premiere RPG developers in the business right now. Stand up, because Inazuma Eleven has just scored one hell of a goal for gaming.