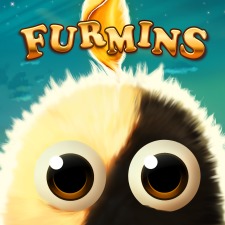 Furmins was Finnish developer Housemarque’s first venture into iOS development, released back in February, 2012. Now, the Super Stardust HD makers have licensed their mobile puzzle game to the creators of Jetpack Joyride, Beatshapers, for its porting and release on the PS Vita. Although a completely different platform, the Sony handheld utilises touch screen mechanics much like smartphones do, and so the gameplay experience here is almost exactly the same. Is it worth picking up? Well, owners of the original version need not concern themselves with this release, but everyone else should read on to find out.

Furmins features 108 levels spanning 9 distinct game worlds (final one being free DLC). The goal of the player is to get their Furmin/s from the starting position to the basket across the play area. Being a physics-based game, the Furmins will follow the rules of physics and therefore need some direction. There are a few key tools in doing this. In any given layout, there will be static objects that can not be altered, and then there will be moveable ones signified by a glowing outline. The player can organise these how they see fit in the pause state before tapping the play button on the top right of the screen to watch the level play out. 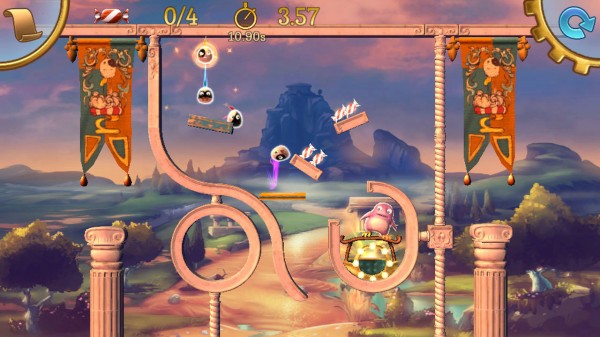 One of these interactables made known early on in ‘Warming Up’ (the 1st world) is the trampoline. Strategically placing these will bounce your Furmin/s into otherwise impossible places to reach in order to collect candies on your way towards the ultimate goal of the basket. Collecting all candies on screen is another condition for 100% completion and is necessary to achieve a 3-star rating for each level. The third condition is to reach the basket within the specified time limit – taking longer doesn’t fail you, but you won’t earn that third star. There is also a bonus for completing a level without using all of the provided objects. Later, conveyor belts, bumpers, ice blocks, regulators and ropes will be gradually introduced moving into the latter part of ‘Homelands’ (the 2nd world).

Conveyor belts and bumpers can both be controlled by tapping anywhere on the touch screen, or on the rear touch pad. Doing so will reverse the direction of the conveyor belts, and activate the bumper respectively. When both are employed on the same level, the player must take note of the fact that using a bumper will also affect the conveyor belt’s direction, and vice versa, which can be easily forgotten. Ropes objects can’t be moved outside the radius permitted by their “leash” and regulators suck in any Furmins in its vicinity and shoots them out the other side. Ice blocks are cool (sorry… okay, not sorry, pun intended) in that they thaw out at different times, adding an extra timed component to the proceedings. 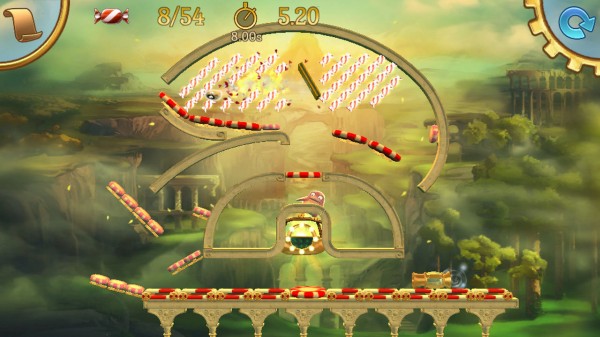 With all of these mechanics considered, the game’s puzzles can get fairly complicated, with persistent trial and error becoming a necessity in progressing through it all. And all of those stars you earn act as a currency that can be paid to unlock each world at your discretion; you’re not locked into engaging them in the order they are listed. And in regards to the 8th world, ‘Cosmic Adventures’ – the toughest of them all – each individual level therein costs between 3 and 5 stars to unlock. Scores can also be compared with friends on the integrated leaderboards, so there is an added competitive edge and incentive to replay levels.

Each Furmins levels is set against a colorful, high contrast and rich painted backdrop with 3D elements such as clouds, leaves and fog to create a sense of depth. Everything in the foreground – from interactable puzzle elements to decorative objects – follows in the visual tone of the level. With all of that being said, for some reason the visuals just don’t click and feel disconnected. Maybe it is the mix of 2D and 3D pieces, the basic, non-descript gold U.I elements or the bland model design… either way, there is a lack of consistent graphical theme. 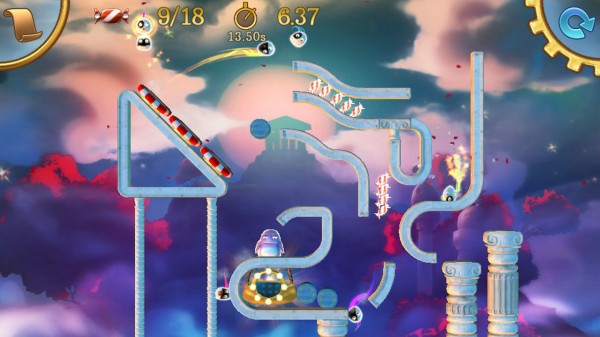 As a prime example of the inconsistent visuals, look at the image above; you’re collecting candy-stripe lollies with a furry creature amongst roman columns… huh? It’s just an odd aesthetic overall. Audio-wise, there is a much stronger motif. The music is generally extremely airy with wind instruments at the forefront of the score. The instrumentation in major scales aids in presenting happy, playful, dream-like environments. The sound effects on the other hand are more generic. When your rating is being calculated for a completed level, the Furmins squeal with each star attained, reminding of Angry Birds and how the birds squawk much in the same way.

Furmins is a challenging puzzler with a very good volume of content. The 108 levels will keep players busy – especially the more casual of us – for a substantial amount of time. The major gripe is the price point, which is more than triple that of its iOS counterpart. The only difference between them is the integration of the rear touch pad on the PS Vita, with no additional levels or content of any other nature. For that reason, it is hard to recommend shelling out more money for what is essentially a non-enhanced title. If you’re an iDevice owner, check Furmins out on the App Store first. If you’re not, then shelling out $10 is suddenly not such a big deal.