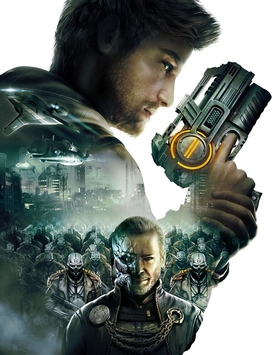 Flashback is a HD remake of the 1992 SEGA Megadrive game of the same name. Primarily a science-fiction platformer, the game also incorporates puzzle elements as well as timed events and armed combat. The game remains faithful to its roots while incorporating new cutscenes, voice acting, and smoother gameplay. 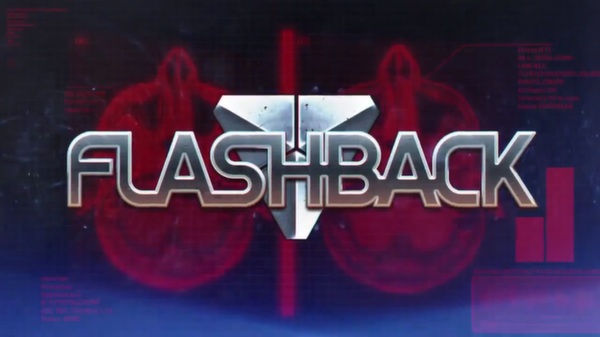 Having been shot down over a jungle on the Planet Titan, Conrad  B. Hart, an agent for the Galaxia Bureau of Investigation wakes up missing a huge section of his memories. After escaping the jungle and recovering scarce parts of his past he finds out that he had uncovered a plot to eradicate Earth masterminded by a group of shape shifting aliens who are imitating world leaders. Fearing that the aliens would try to capture him, Conrad made a copy of his memories and entrusted it to his close friend Ian who later helps him to recover part of his memory. In true Jason Bourne style, Conrad must recover his memories as he falls,  jumps and shoots his way to the centre of the alien conspiracy. 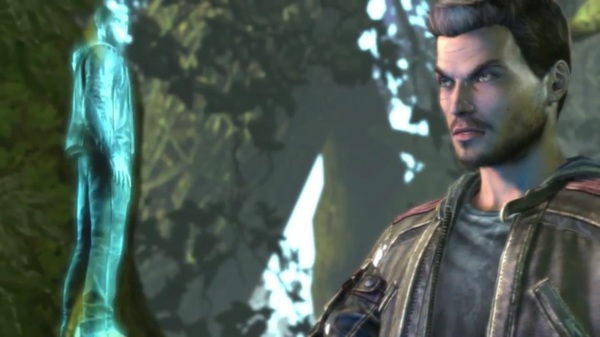 One of the hardest challenges faced by developers remaking games in this sudden wave of classic game remakes is bringing the gameplay out of the 90’s and into the modern era. Having played the original Flashback extensively in my childhood I recall the controls being fairly solid for a Megadrive game. The only problem in the original was the limited space that you could stand in where the climbing controls would actually respond to you inputting a direction and this remake certainly gets rid of that limitation. Unfortunately, this updated version suffers from the same problem that makes fighting games unplayable for me on consoles and that is the fact that analogue sticks have too many possible input directions and all you need for a game like this is up, down, left, and right. I imagine the PC version of Flashback will be considerably more pleasant to play and there will be a lot less falling back off of ledges and jumping into a mine instead of getting up to the next platform so it might be worth waiting for that. 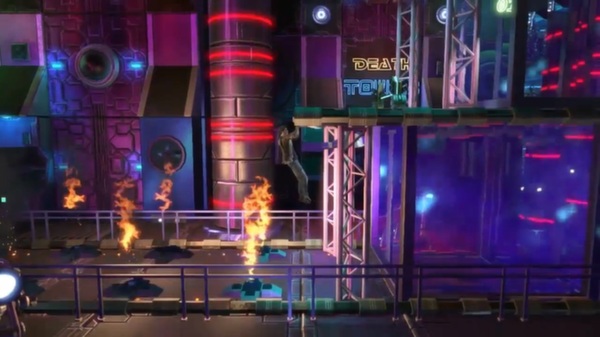 Modern gaming suffers from a cancer where games are dumbed down to the point where they are no longer enjoyable and that was what I was most worried about going into this game.  The original was punishingly difficult and I fondly remember my dad  being stuck on one particular mission  for weeks on end, driving my mother insane with the constant squeal of poorly rendered alarms in the background. Deciding to play through Flashback on the normal setting, one of three out of easy, normal, and hard, I was baffled by how easy the  first hour of the game was. Enemies fell at my feet, puzzles got solved almost by accident,  and I only died once through my own stupidity by plummeting to my doom. But that all came to an abrupt end very suddenly and dozens of deaths later I found myself remembering why I enjoyed this game much more than Sonic or any of my family’s other Megadrive games back in the 90’s. 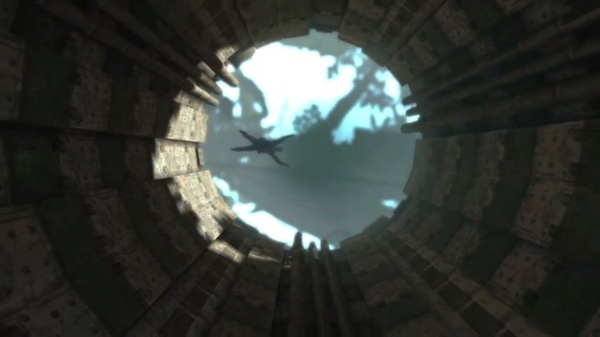 One new feature of the game I was not so keen on was their attempt to make Conrad more accessible to a younger demographic. Any main character that uses the term, “Awesome-sauce,” in any other context than when praising a particularly delicious pasta dish instantly loses all respect I may have had for them regardless of whether they are an idiot like Duke Nukem or a badass like Nathan Drake. Conrad’s voice and scripting didn’t feel fitting to his fairly tragic backstory and supposed tough-man persona and the whole game feels less serious as a result. Tragically, the actual story behind Flashback is fairly strong and when you are not doing boring tasks like grinding for credits or experience in short bursts the narrative and pacing is superb. Admittedly aliens disguising themselves as government officials and severe memory loss all seem generic to us today with the existence of the Bourne franchise and millions of alien movies. But behind all of that is a heartwrenching story about a man’s life being ripped apart because of what he knows and unfortunately I did feel like the addition of voice acting and premature cutscenes did nothing, but take away an air of mystery and the severity of Conrad’s situation. 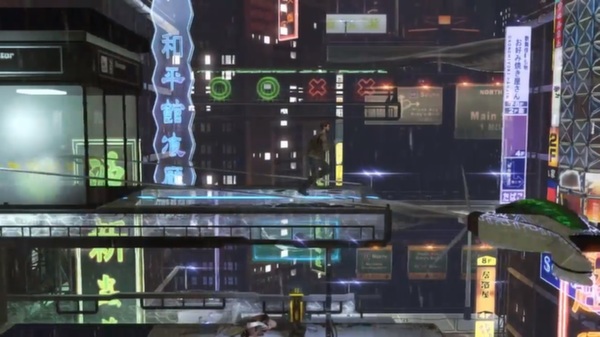 It goes without saying that this game is far prettier than the original with its new 3D aesthetic, animated cutscenes, and dynamic camera panning. Conrad actually looks like a person instead of a silly pixel art sprite with an extremely poor taste in fashion which threw me a bit. If you were to put Flashback alongside any summer blockbuster from this year there is not even a comparison to be made. Even compared to games from a few years ago it doesn’t look as high fidelity or smooth and at times I questioned whether some of the cutscenes were even running in 30fps. However, for the most part the aesthetic is pleasing and gloriously sci-fi. I don’t think  there is a single spot on any level that you could stand without seeing some sort of excessive laser touch screen or light bridge and that includes the jungle that you wake up in! For a platformer it looks fantastic and if you are a lover of sci-fi you’ll definitely want to see Flashback taken into a new age. 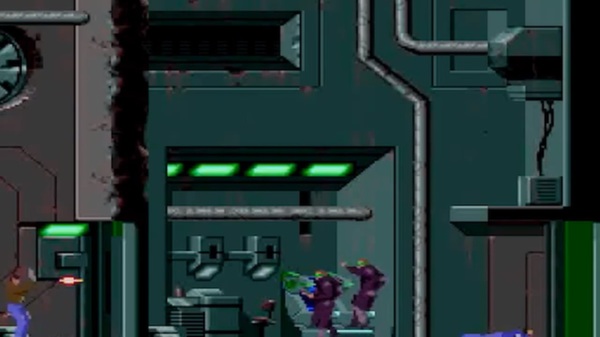 Words can’t describe the amazing feeling of nostalgia that came over me when the menu screen appeared and the same gritty title music from the 1992 original reached my eagerly awaiting eardrums. However, past the menu screen I didn’t recognise any of the original music and none of the new tracks are of any note. Most of the audio you will hear in this game is the ambient background track that I would personally recommend turning down in the settings because it can be a bit overbearing at times. Aside from that though the guns have sufficient punch and the sound effects associated with enemies, the environment, and interactive elements are all brilliant. 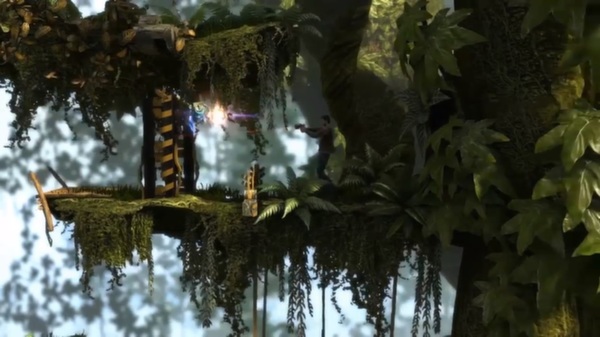 Looking at this from the point of view of a man who loved and adored the original I am not disappointed by this remake, but I am not blown away either. Gameplay wise it is better than it has ever been and despite the analogue stick issues VectorCell and Ubisoft have managed to breathe a whole new life into one of my all-time favourite games which I am ecstatic about. My issue with Flashback is that in the process of redesigning the aesthetic the game is too bright now. The badly casted voice acting, the cheesy scripting, the weirdly colourful rendition of this once dystopian universe. It all culminates into what I feel is an unfortunate, childish imitation of a dark and wonderful sci-fi thriller.

As a sci-fi platformer it is still an amazing game though and if you can ignore the nonsense that comes out of Conrad’s mouth half of the time then newcomers and veterans alike will appreciate its engaging story and unique style that made it so popular on the Megadrive. Even if you can’t stand the new version for some reason, the original is available through the start menu which in my opinion makes it a must buy. For 800 Microsoft points it is worth picking up just for the replayability alone. Collectibles, speed-run leaderboards, and a fairly tough list of achievements will definitely keep me coming back for more. My 5 year old self was awoken again for a brief stint and for all its problems, Flashback is still to this day a fantastic game, even without the ear-piercing sirens. Well … At least my mum was glad.