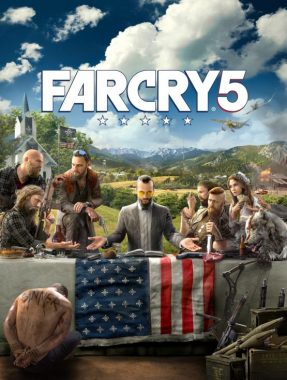 Ubisoft is taking the latest iteration of the Far Cry series to the United States in a small town in Montana. The Project at Eden’s Gate cult has violently taken over the valley, forcing the locals to convert at gun point. In this open world shooter, players will take on the role of a rookie deputy who must unite the locals and fight back against the cult.

Far Cry 5’s rural United States setting and the religious overtones create rich waters for socio-political commentary on the state of American life and religion. While Far Cry 5 manages to get a few hilarious parodies and the odd thought provoking moment, the writers never properly explore those rich waters. Instead, they opt for a safer, mass market-friendly plot that emphasizes an us versus the crazy cultists battle. The plot makes for a decent action title, but there are times where the cult’s decisions make little sense other than to give some extra screen time to flesh out the Seed family, the leaders of Eden’s Gate. 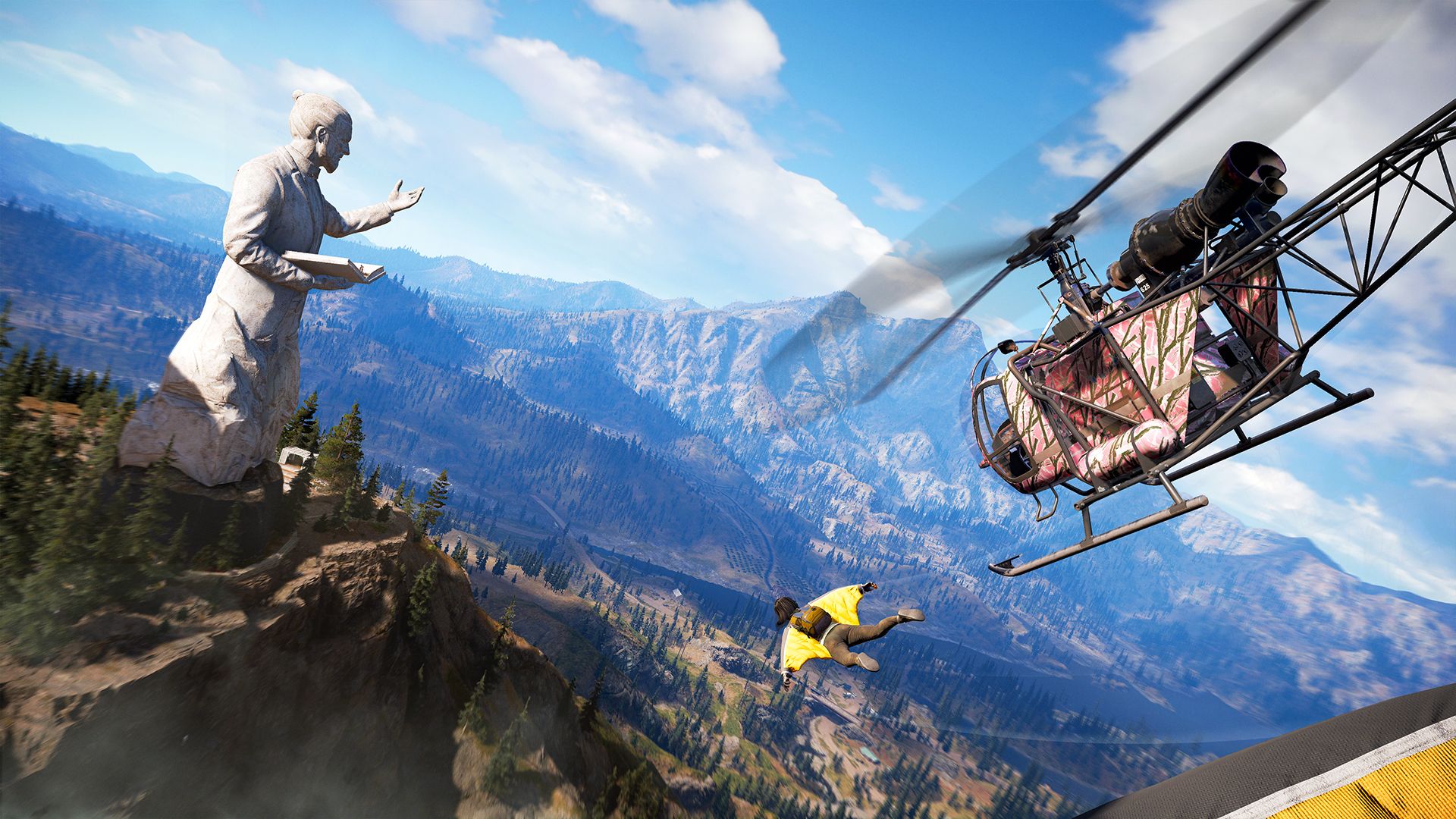 Far Cry 5’s AI companions provide some opportunity for players to spend some quality time with the NPCs. Outside of the introductory missions, each character is fleshed out with the conversations they have with each other and comments they make to the player. While there are nine main AI companions, there are technically only six that have spoken lines. With six different characters, the lines are rather limited. As a result, serious characters like Grace and Jess are easily eclipsed by comedic relief companions like Hurk and Adelaide. It’s simply easier to create comedy with such limited parameters than deep characters that players should feel connected with. However, I’m not particularly surprised by the game’s strong comedic showing, as I’ve always felt that the writing for Far Cry 3 and onwards has always been at its best in the lighter moments.

Far Cry 5 is an open world first person shooter with a strong emphasis on exploration. The game offers a lot of flexibility for players to approach the game using stealth, run and gun tactics, or anything in between. Far Cry 5 uses the same stealth system as the previous open world titles. It hits the right difficulty level for mass market appeal, providing enough of a challenge to be rewarding without being punishing. The stealth system is also fast paced enough that it transitions into action sequences smoothly in case enemies are alerted to the player’s presence.

The level design is excellent. The game’s sprawling map is separated into three zones set in a valley. The area is filled with all types of buildings and locations one would expect from a small town in rural United States with a few extra surprises. The world feels busy and occupied, though not nearly as alive as Far Cry 4. I think the difference in setting is a major factor, as it was common to see people tend fields outside of towns in Far Cry 4, while players are more likely to come across the odd hunter or camper in the bush in Far Cry 5. The story missions are well designed, encouraging players to at least sample a little of everything the game has to offer. The side activities offer a nice variety, from relaxing fishing to assisting the resistance by battling the cult. 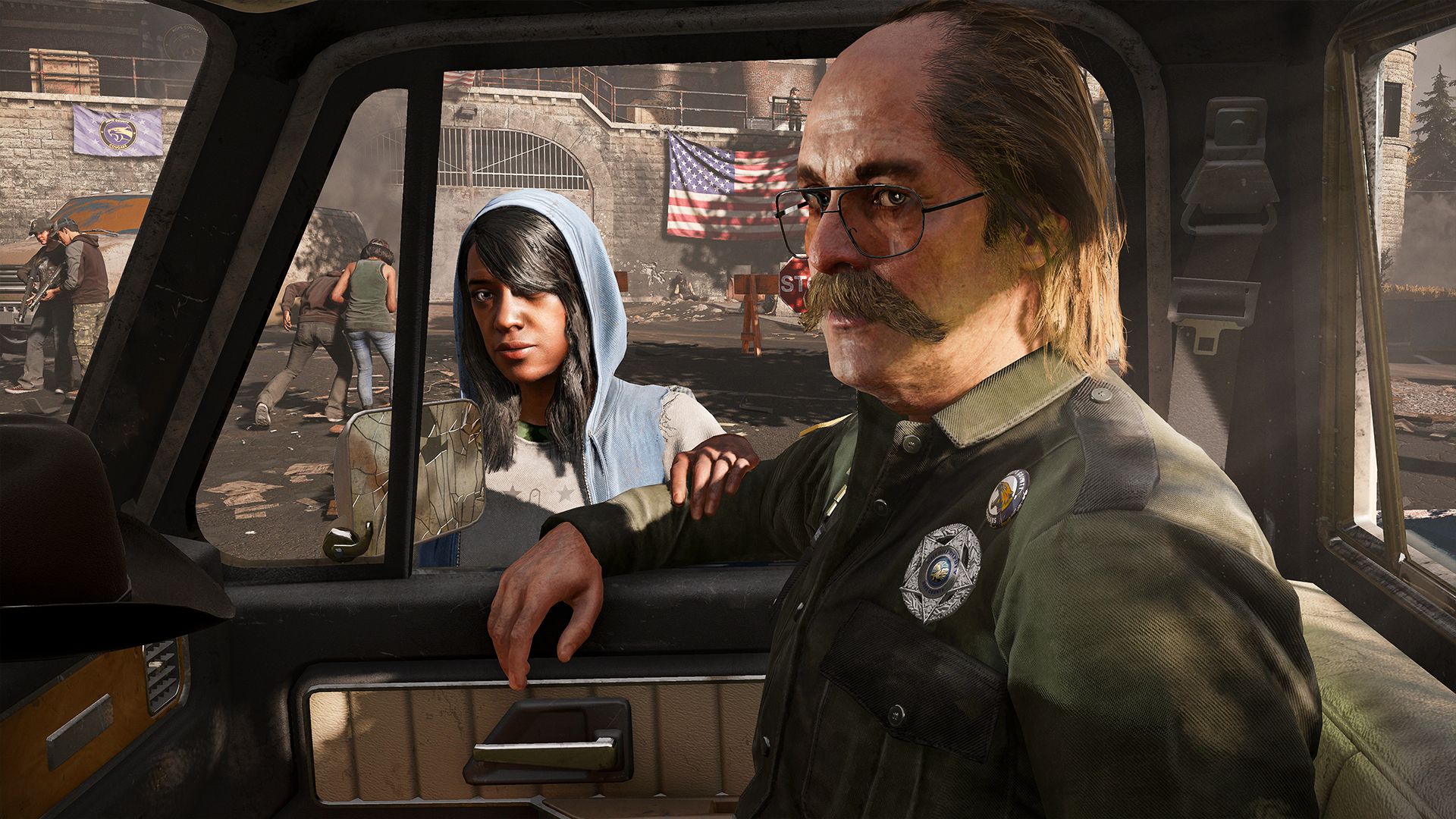 The progression system is mostly freeform. Players are given a list of perks organized into three categories. Most can be purchased right away, while some need specific missions or previous perks to be unlocked. Perk points are earned by collecting magazines throughout the world, completing challenges, or playing arcade mode. The perk selection covers a wide range of playstyles, quality of life enhancements, and abilities designed to help players earn more money. Unlike the traditional levelling system found in the arcade mode, the main game’s progression is more active in nature that forces players to dabble in everything the game has to offer. Players who prefer to stick with one playstyle and only focus on main missions will find it hard to acquire enough perk points to flesh out their build.

Far Cry 5’s arcade mode harks back to the golden age of modding. The game ships with a separate map and mission editor for content creators to craft missions for singleplayer and co-op play or maps for multiplayer matches. Players can then visit any arcade unit in game or via the main menu to try out a plethora of user created content.

Far Cry 5 introduces micro-transactions to the game, offering silver bars as an alternative to dollars for purchasing weapons, vehicles, and clothing. I find the overall money drop rate is on par with previous Far Cry games. While the NPCs in Far Cry 5 are not the most generous source of money, hunting has been overhauled to be more profitable as pelts are no longer used to upgrade bags and are only sold for profit. Prepper stashes and secret areas usually provide a welcome infusion of cash for those willing to explore. Additionally, silver bars can be found in safes around the map and as rewards for weekly challenges in arcade mode. 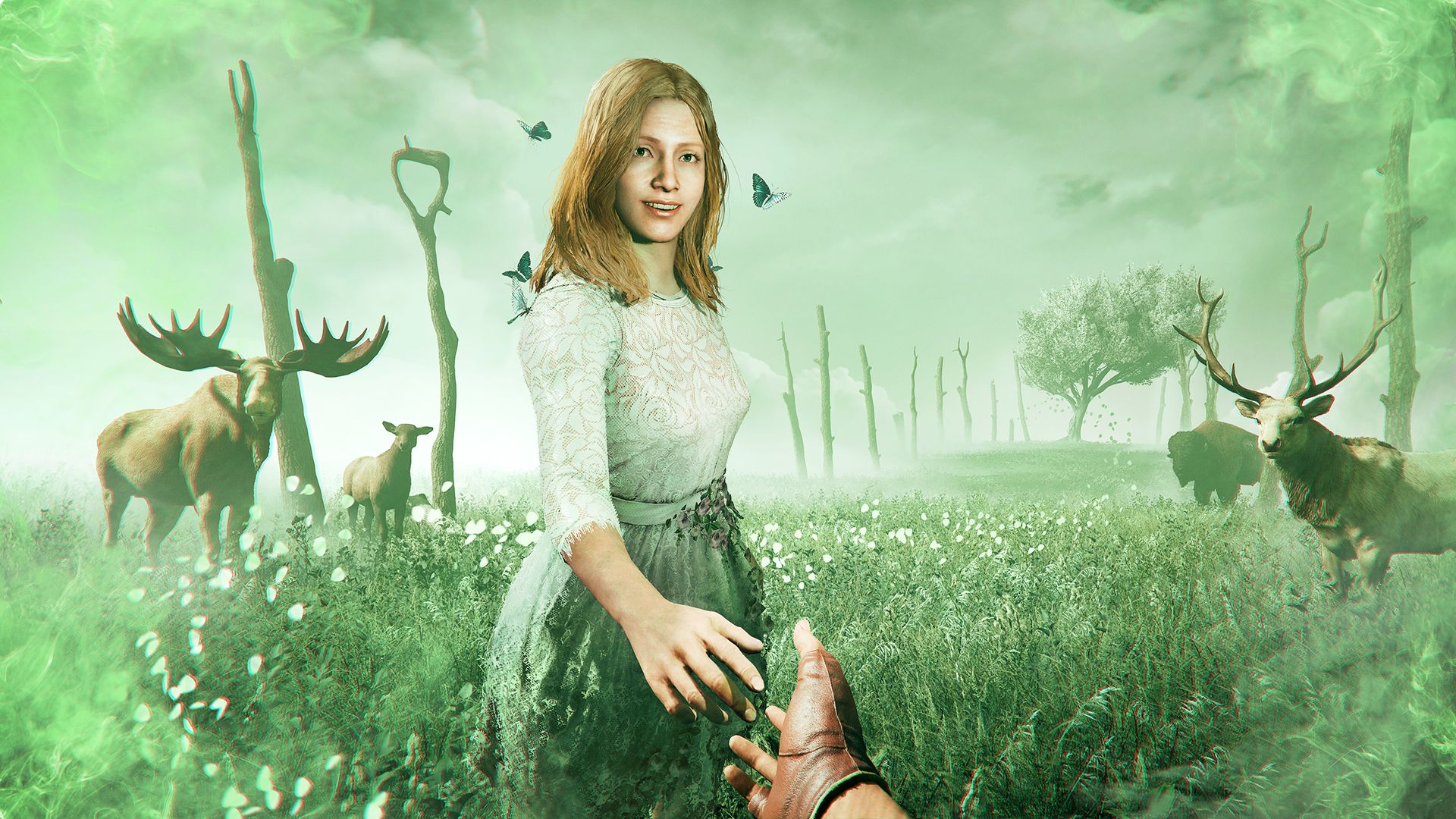 Probably the easiest source of controversy will be the special weapons that are available for purchase the start of the game for silver bars or at a much higher dollar price. While these weapons are no different from their regular counterparts statistically, a few special weapons are available long before their regular counterparts are unlocked. I see little issue with this as I found weapons to be generally well balanced. Later weapons tend to feel like they are designed for different playstyles, rather than completely replacing previous weapons.

The PC port quality is solid. Ubisoft has provided players with extensive graphic customization options for the game. Far Cry 5 also supports PC-specific features like FOV adjustment, uncapped FPS, and ultrawide support. One minor annoyance is that Far Cry 5 directly adjusts the volume of the microphone in Windows, instead of adjusting the volume of the microphone in game. The mouse and keyboard controls are very good. The only problem I ran into was fishing using a mouse. Fighting the fish requires players to move the rod in the opposite direction. Unlike an analog stick that continuously inputs a direction when held down, mouse movement stops when the mouse stops moving. Players are then forced to continuously swipe in the desired direction to tire the fish. 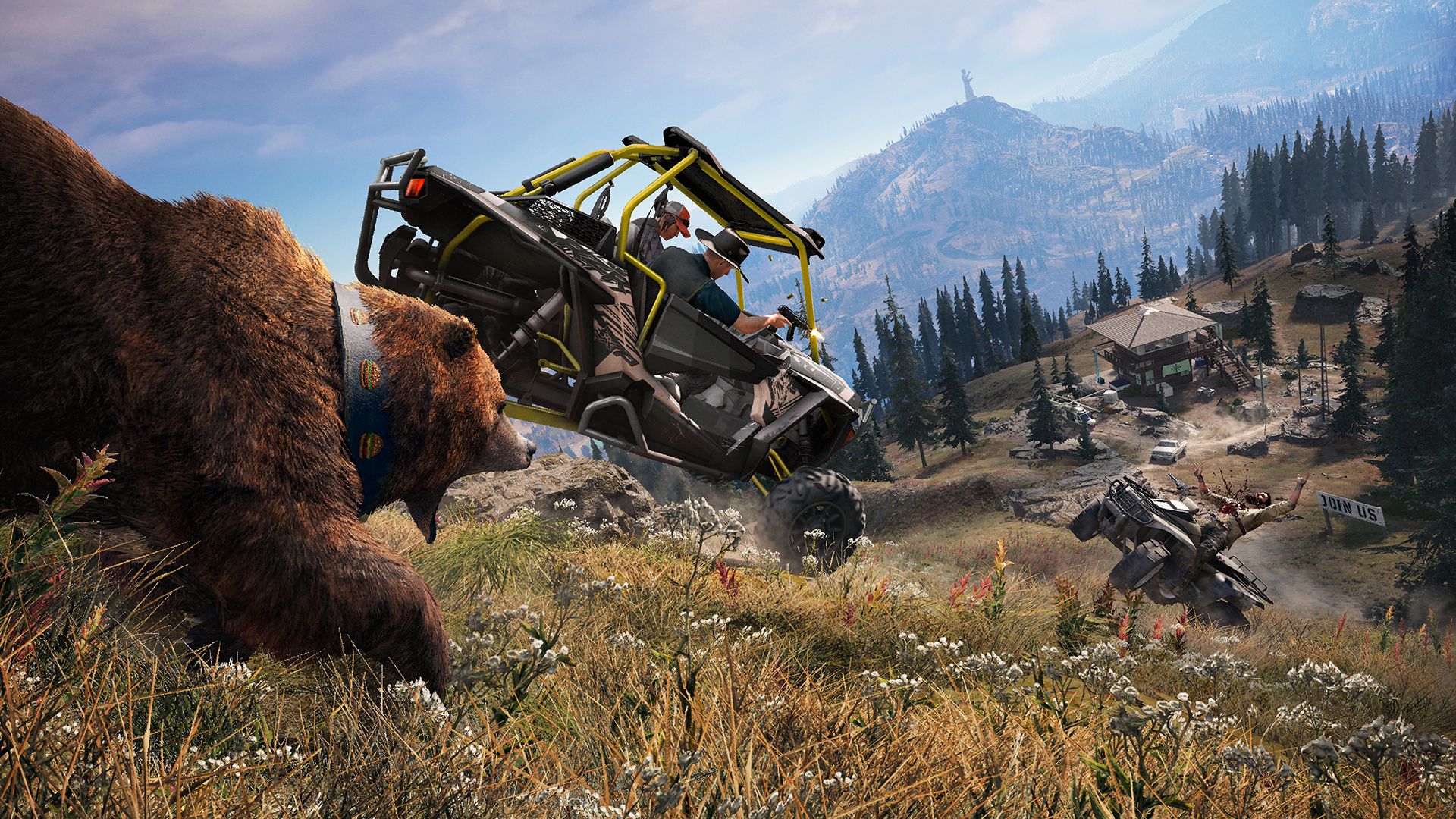 Far Cry 5’s visual experience is excellent. The UI is incredibly refined, displaying a compass and a few important icons at all times, then subtly fading in important information like ammunition as necessary. The subtility gives the game an immersive feeling, letting players enjoy the rugged beauty of rural Montana. As usual with recent Far Cry games, there are sections involving hallucination and intoxication. Ubisoft does an excellent job portraying the effect through the soft highs and the terrifying lows.

The audio experience in Far Cry 5 is top notch. The voice acting is generally excellent, though there are the odd character that misses the mark. The sound effects are solid. The soundtrack is probably the best part of Far Cry 5’s audio. The instrumental tracks are fantastic, mixing elements of rock, American folk, and traditional video game fare. The Project at Eden’s Gate hymns are incredibly catchy. Given the cult context, I felt a little creeped out when I caught myself humming a few of Far Cry 5’s hymns long after I turned off my PC for the day. 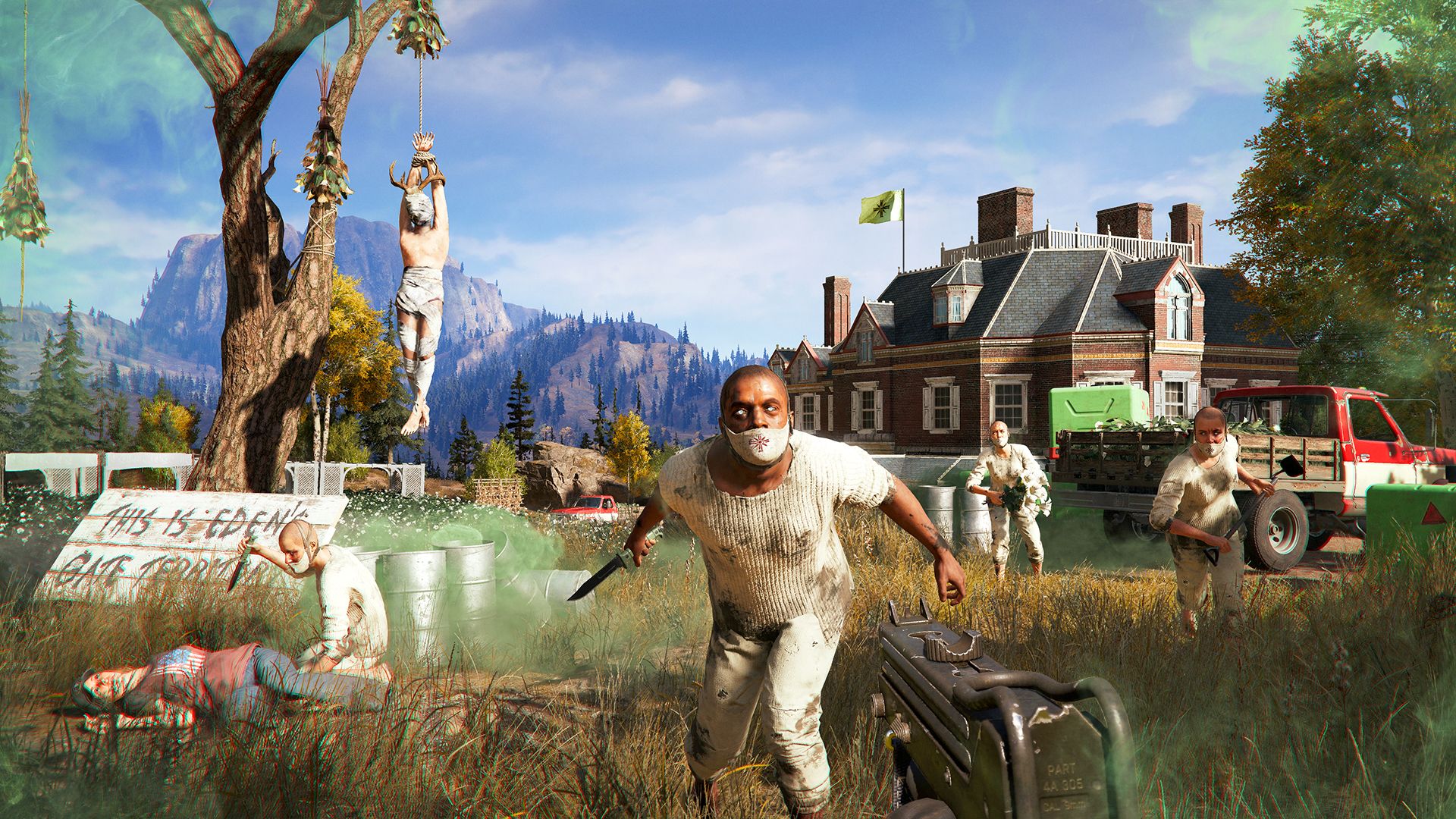 Far Cry 5 is an excellent addition to the franchise. While the writing is a bit weak due to its shallow nature, the audio/visual presentation is exactly what is expected from a major title, and the soundtrack deserves a special mention. The gameplay continues to be solid. Far Cry 5 takes an already excellent open world experience and tightens up the collection and levelling systems. The new arcade mode gives the game a ton of replayability and an outlet for budding map makers and level designers to hone their craft.

Far Cry 5 is an excellent open world shooter with an amazing soundtrack and shallow plot full of untapped potential.
8.5